Share All sharing options for: Turkish Club That Signed Deron Williams Is Now After Kobe Bryant

Earlier today, the agent for Deron Williams confirmed that D-Will has reached agreement to play for the Turkish club Besiktas during the NBA lockout. Besiktas is based in Istanbul and is the team that briefly employed Allen Iverson last year. According to Yahoo's Adrian Wojnarowski, the hub of all NBA intel, Besiktas is now after Kobe Bryant, and Kobe may actually listen to them.

Bryant is open to considering overseas offers for the duration of the NBA lockout, sources familiar with his thinking told Yahoo! Sports on Thursday.

[Besiktas coach Ergin] Ataman will travel to the United States with Besiktas management officials next week to trumpet the signing of Williams, and wants to arrange a meeting with Bryant and Bryant's agent, Rob Pelinka, he told Yahoo! Sports on Thursday afternoon.

"After we signed Deron, we started to look around and find a friend of his, find other NBA stars, who want to come over and play with us," Ataman told Yahoo! Sports. "If Kobe wants to play with Deron in Istanbul, we can discuss this."

Deron's deal, which reportedly will pay him $200,000 a month plus perks, allows him to leave the Turkish club and return to the NBA as soon as the lockout is over. Any deal for Kobe would contain an identical out-clause.

Not surprisingly given the present circumstances, deals to bring NBA stars over to Europe raise their share of complications. One is that FIBA, the governing body of international basketball, generally requires a player to obtain a letter of clearance before switching leagues. The letter would certify to the player's destination league that he's not under any remaining contractual obligation to the league he's departing. It's not at all clear, however, that the NBA is willing to provide letters of certification for its players during the lockout. For what it's worth, according to Mark Stein of ESPN the NBA players' union is taking the position that during the lockout, neither NBA nor FIBA has the right to block the movement of NBA guys to other leagues.

Also, there's the question of injury risk. Again according to Stein, an injury overseas would cause an NBA player to forfeit guaranteed monies under the existing contract with his NBA team. For lavishly compensated stars like D-Will and Kobe, that's a serious pile of change to put at risk. An insurance policy could theoretically address this issue, but until the details of such an arrangement emerge, and they haven't yet in the case of Williams, we're still in uncharted territory. In part for this reason, Ken Berger of CBS Sports expressed skepticism earlier today that any NBA stars would actually make the jump across the pond (though it should be pointed out that Ken's post went up before Deron's agent confirmed the Besiktas story).

In any event, here's what Iverson looked like in his Besiktas jersey, if you'd like to start imagining Kobe in one. 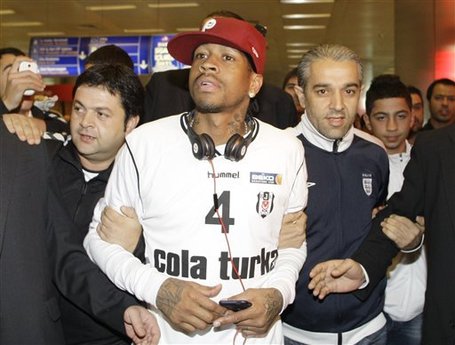 Possibly meaningful/possibly irrelevant detail I just thought of in the middle of the night (3:45 a.m.): Recall that Kobe is already a pitchman for Turkish Airlines. I imagine they'd be happy to chip in a few lira if it meant bringing him to Instanbul.