The British Are Coming... For Ron Artest

Share All sharing options for: The British Are Coming... For Ron Artest

There are three reasons I'm posting this story, all extremely compelling. First, it involves Ron Artest possibly ending up in England, and I can honestly say that very little would make me happier than the spectacle of Ron unleashing his crazy amongst the Brits. It would be delightful, fully justified retaliation for Russell Brand.

Second, I don't get nearly enough opportunities to cut and paste from the Ellesmere Port Pioneer, which I will do forthwith. Fancy a block quote, guv'na?

CHESHIRE Jets [Ed. note: the dudes in the yellow jerseys above] are lining up an opportunistic swoop for LA Lakers star Ron Artest - and it seems he may be willing to move across the Atlantic.

The Jets contacted Artest to enquire about his availability after he revealed via the social networking website Twitter that he would consider a move to the UK.

New Yorker Artest, 31, says he is happy to play in the UK because the NBA is currently involved in a pay dispute with the NBA Players Association, which could see the start of the American season delayed by months.

Third, and by far the most important, a Google image search on "Cheshire Jets" turned up THIS.... 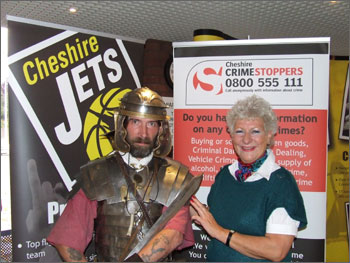 (*leans back in chair, cracks knuckles*) My work here is done.