Los Angeles Lakers Need Lady Luck To Return To Their Side

Share All sharing options for: Los Angeles Lakers Need Lady Luck To Return To Their Side

Two nights ago, the Lakers completed one of the worst three point shooting nights in NBA playoff history making only 2 of 20 attempts.  Only two other teams in playoff history have had an equally horrific shooting night from deep. The first was Detroit in a 66-64 loss to Boston in 2002, in what had to be the worst playoff game ever on the eyes.  Boston won the game shooting 34.6% from the field and they themselves went 2 for 19 from behind the arc.  The second game is the well known-choke job by the Sacramento Kings in the 2002 Western Conference Finals Game 7.  The Kings should have easily ended the Lakers quest for a three-peat that night but their failure to connect on any shots (they were 53% from the line as well) ultimately led to their demise.  How ironic it is that nine years later it's the Lakers who are on the unfortunate end of having an epic cold shooting streak, including only 55% from the line, that this time could end the quest for another three-peat. Thankfully for the Lakers this was not game 7, and so they still have time to right the ship.

Obviously luck, or I should say lack-there-of, played a huge role in the game's results.  The Lakers are not a good three-point shooting team (they finished 18th in three-point percentage this season) but they will not have many games where they make only 10% of their attempts.  The consensus' thought is that the Lakers will certainly revert to form and shoot much better the rest of the series.  It is this recognition of small sample size randomness that leads one to not over-react and assume the Lakers will shoot 10% the rest of the series.  Interestingly enough, if Lakers management had used this same discretion in the past, perhaps the Lakers would not be in this predicament in the first place.

Here are two charts showing the three-point percentage (lines) and the number of attempts (columns) for two players.  I am not revealing the names of these players yet but you may be able to guess who they are.

The first chart (gold) shows a player who took over 160 three's in each of the first four periods and shot between 35.4% and 37.0% in three of the four periods, with a fourth up at 42.7%.   He averaged 37.9% on over 1,000 attempts, however the latest period he shot only 32.3% (highlighted red).  The latest period, though, was based on a much smaller sample size with only 96 attempts.  So how should we treat this decrease?  Is this player a worse shooter now or is it simply randomness associated with fewer attempts?

The second chart (purple) shows a different player in an opposite setting.  This player took over 100 attempts in each of the first three periods and shot between 31.2% and 35.9%, however his latest period jumped up significantly to 45.5%.  This was based on only 88 attempts though.  Did this player suddenly become a much better shooter or is too simply randomness?

If you have not guessed it already, the two players are Sasha Vujacic (gold) and Shannon Brown (purple).  To answer the question of whether the changes in their shooting percentages were random or not we can look at how they have done since that latest period above.  Here are the charts showing their shooting percentages and attempts since that latest point (I have also added labels so that you can see the periods corresponding to the data).

The first chart shows that Sasha Vujacic has seen his three-point shooting percentage bounce right back up to 37.0% (similar to his career average of 37.1%) and this on a very respectable 262 attempts.  It certainly appears that the 2009-10 season was simply the result of small sample size and not Sasha actually being a worse shooter.

As for Shannon Brown, he has regressed significantly falling well below his career average. He has made only 26.4% of his 140 three point attempts since December 14th this season.  It appears that the hot shooting from the start of the season through December 14th was merely a hot streak in a small sample size. Why is the date December 14th important?  That was the day the Lakers decided to trade Sasha Vujacic to the New Jersey Nets.

The Lakers were faced with a predicament in that Jerry Buss wanted to trim salary and they had two back-up shooting guards so one had to go.  It was a battle between Shannon and Sasha for that coveted spot.  Sasha's sub-par season before combined with Shannon's hot start to the season led the Lakers to choose Shannon.  There obviously could have been other factors, such as the larger savings achieved by trading Sasha's more expensive contract, but no one would deny that Shannon's shooting and Sasha's struggles led to the decision.

There-in lies the faulty decision making.  Lakers management chose to ignore the results of Sasha's previous 1,000+ attempts and Shannon's 300+ attempts, which showed Sasha to be a much better shooter, and instead focused on the 96 and 88 most recent attempts to make their decision on which player to keep.

Ironically the Lakers may not have needed to trade one of the two if they hadn't made the same mistake four years earlier. It was four years ago that Luke Walton had a "break-out" season.  See the following chart: 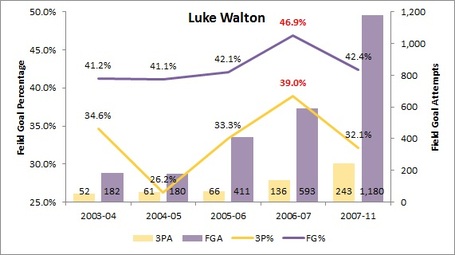 Luke never shot above 42.1% during his first three seasons but in 2006-07 he shot 46.9% (highlighted red), an increase of almost 5%.  He had shot a combined 31.2% from beyond the arc over his first three seasons but that jumped to 39.0%, an increase of almost 8%.  He was a young player at the time and young players tend to improve however his sudden jump was not a normal progression.  Sure enough, since that 2006-07 season he has regressed right back to the shooting percentages of those previous three years.  Unfortunately for the Lakers, they saw that great 2006-07 season and instantly signed Luke to a 6 year - $30 Million contract.  While I wouldn't classify that season, as the result of small sample size randomness, in the same manner as Sasha and Shannon above (he did take 593 field goal attempts), there was a much larger sample of historical data saying he wasn't that good.

So why is Luke Walton important in the Sasha and Shannon competition?  He is making $5.26 Million this year which is pretty close to Sasha's $5.48 Million.  Had the Lakers recognized the potential for Luke's 2006-07 season to be somewhat of an over-achievement, fluke, or whatever other adjective you desire, then they may not have given him such a long and lucrative deal.  If his deal were of the more common four year variety he would have been an expiring contract this season (like Sasha) and Walton likely could have been moved instead.

It isn't all bad news for Lakers management though.  They were faced with a similar situation only two years ago and this time made the right call.  Trevor Ariza was never considered a good three-point shooter but in the 2009 playoffs he had an incredible run. 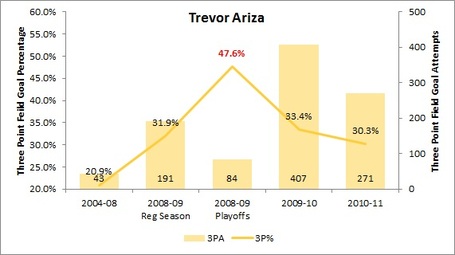 Ariza connected 47.6% of his 84 attempts.  It was one of the main reasons the Lakers brought home the title and like Luke Walton before him, he tried to cash in with a large long-term contract.  The Lakers (perhaps wiser because of the bad Walton deal), did not bite and so Ariza left for Houston instead.  Sure enough, Ariza has reverted right back to a poor low 30's shooter each of the last two seasons.

The Ariza situation only makes the decision to keep Brown over Vujacic that much more puzzling.  The Lakers are still feeling the pain of giving out a contract to Walton for what was a single fluky year of solid performance.  They then recognized that Ariza's run was not likely an improvement but a random hot streak in a small sample and avoided another Walton-like contract.  But then when the Sasha vs Shannon issue came up, they based their decision on Shannon's performance which was very similar to Ariza's (45.5% on 88 attempts vs 47.6% on 84 attempts).  Shannon has essentially "pulled an Ariza" but this time the Lakers bought it.  Now it did not get him a large contract, but it instead got the Lakers to ship out his main competition for the back-up shooting guard job.

I am not saying that the Lakers would have beaten the Mavs in Game 2 had Sasha still been on the team.  However, the Mavs have chosen to pack the paint with defenders making penetration and scoring in the post almost impossible.  They are giving up wide open three point opportunities because the Lakers, for the most part, can't shoot.  The Lakers would have certainly benefited from a solid three-point threat off the bench over a supremely athletic guard that can't shoot, dribble, or pass very well.

Whether it is health, a few favorable whistles, or the bounce of the ball on the rim, it certainly takes a little luck to win a title.  The Lakers were the fortunate ones nine years ago when Sacramento only went 2-20 in an overtime game 7. A single different bounce of the ball on one of those threes and the Lakers don't win that third championship.  Those types of lucky bounces are beyond the control of management.  But good management can decipher the difference between true trends and randomness and make the appropriate business decisions that best maximize the team's potential.

The Lakers front office has done well to hit home runs by getting Gasol and drafting Bynum, and these moves are what make teams contenders.  However, it is often the lower profile personnel changes that can transform a contender into a champion.  The Lakers made those successful changes in prior years.  They chose Ariza over Brian Cook and it paid off with a title in 2009 when Ariza came through with great shooting.  They chose Artest over Ariza in 2010 and it paid off with another title in which Artest was fantastic defensively and came through in game 7 of the finals.  This year the Lakers chose Brown over Vujcacic, and if Brown doesn't begin to contribute and the Lakers fall short, it is certainly one management decision that should be questioned.  It appeared they learned their lesson after Walton to not believe significant improvement in small sample sizes, but it appears they forgot it this year and the result could be devastating.