Share All sharing options for: 5 Keys to Lakers - Mavericks Semifinals

In my previous Lakers-Hornets series preview I focused on five key items for the Lakers in these playoffs. That preview was Lakers focused and since all those items still apply in this series I won’t bother repeating them. Instead I will focus on the opposition, the Dallas Mavericks. Saurav provided an excellent and thorough preview of the positional match-ups yesterday so I will again discuss what I feel are five key items in the series with regards to Maverick’s strengths or weaknesses.

The five key items are:

The impact of Dirk Nowitzki

If you polled NBA fans, coaches, GMs, and anyone else in-the-know who the best power forward in the league was, you would probably find Pau Gasol winning the vote. Being a two time champion has certainly helped out the perceptions of Pau being at the top of the list. While Pau is truly a great player, giving him the title of best power forward in the league is a huge slight to Dirk Nowitzki. Dirk was been a perennial All-Star and a much deserved MVP, yet he is still vastly underrated by most. 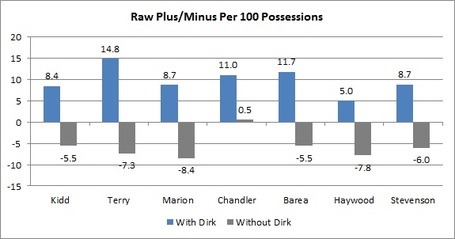 Those statistics speak volumes to what Dirk brings to the game and his teammates. It was not a fluke that the Mavericks went 55-18 with him in the line-up and only 2-7 without him. Nowitzki once again just missed the exclusive 50-40-90 club with 51.7% on field goals, 39.5% on threes, and 89.2% on free throws. The guy can flat out play and doesn't back down under pressure. What does this mean for the Lakers?

It means that the Lakers must take advantage of the 6 to 10 minutes per game he is on the bench. When he is on the floor the Mavs are the equivalent of a 60 win team. When he is on the bench they suddenly become the equivalent of the Timberwolves. The Lakers would be served well to put together six to ten point runs when Dirk is out. If they don’t do that, expect each game to be very tight at the end which is where Dirk’s excellent ability to generate shots for himself and convert at a high rate could swing the series for the Mavericks.

While the Lakers won the season series 2-1 and outscored the Mavs by 8 points per game in those contests, there was a particular line-up that really hurt the Lakers. The Lakers really struggled when Jason Terry, Shawn Marion, and Dirk were on the floor together and it didn’t matter which Lakers were out there either. This unit wasn’t just a problem for the Lakers but the league as a whole. Here is a chart showing the plus/minus stats for this unit and all other Dallas units against the Lakers and the rest of the league. 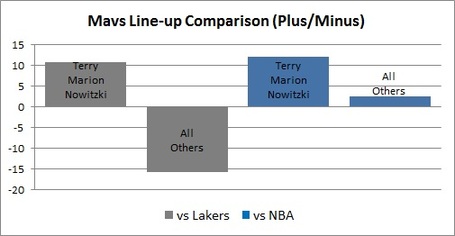 Clearly this combination has been extremely effective this year against the league and the Lakers did not fare much better. As mentioned previously, any line-up with Dirk is going to be fantastic, but adding Terry’s floor spacing coupled with Marion’s ability to defend multiple positions and keep possessions alive by crashing the offensive glass takes this line-up to a new level.

Fortunately for the Lakers these three players saw the court together for fewer than 13 minutes per game during the three games this season. This is a very productive line-up that can be utilized much more than it was during the regular season which could pose significant difficulties for the Lakers.

One reason the previously mentioned line-up performed so well was because of their ability to grab offensive rebounds. The Mavericks top three offensive rebounders (in order) are Tyson Chandler, Brendan Haywood, and Shawn Marion. All other main rotation players have an offensive rebounding rate less than Kobe Bryant. It isn’t that the Mavs can’t rebound (they are 26th in the league in offensive rebounding), but they simply choose not to. The Mavs are not blessed with speed and do not want to scramble in transition defensively. Instead they send one player (their center) to the offensive glass while everyone else begins to transition back on defense. When Marion is on the floor though they now send two players to the glass and he does well to crash the boards and still get back in transition.

For the Lakers this is a blessing. Despite the enormous size that the Lakers possess, they are a pretty poor defensive rebounding team ranking 22nd in the league. One reason for this is their defensive strategy. They funnel the opposition’s perimeter players into their bigs to challenge all shots. The Lakers bigs leave their men to help on penetration and trust that someone will help cover their man on the glass. This obviously results in mismatches (guards helping on centers) or blown assignments and thus the Lakers give up quite a few offensive boards. Keep an eye on the Mavs effort on the offensive glass.  Will they try and exploit this Lakers weakness but in turn open up their own weakness to transition offense?

The Lakers and Mavs both play like typical "old" teams. They do not jump passing lanes and gamble often. Instead they focus on staying in front of their man and contesting shots. These are trademarks of older veteran teams. As a result, don’t expect either team to cough the ball up often. Both teams average fewer than 10 turnovers in the three regular season meetings. It will be a slow-paced grind-it-out game.

This slowed pace is ideal for the Lakers. The Lakers most effective players (outside of Bynum) are their oldest. The Lakers will be able to set their defense almost every possession and when the Lakers avoid giving up transition points, their defense is one of the best in the league. While the Mavs too prefer a slow paced game, in a battle of half-court execution it is tough to find a better team than the Lakers.

It takes more than just talent and heart to win a title. It takes a little good luck as well. Whether it is the fortune of good health, an unlikely upset taking out a top tier competitor, or an unexpected tip-in a championship team usually experiences a few fortunate events on the way.

The last two seasons the Lakers have had home court advantage in the finals despite not having the best record as the number one seed in the east went down early. It certainly helped playing Boston in the friendly confines of Staples Center in game 7 last year. While home court may not have mattered the year before against Orlando, facing a team that did not have a healthy Jameer Nelson certainly did. The quick guard wreaked havoc on the Lakers during the season but was rather ineffective in the finals after the long time off recovering from injury.

It appears the same fortunes are shining down on the Lakers yet again. The Spurs were just eliminated as a #1 seed meaning the Lakers will have home court advantage for every series in the Western Conference. The Lakers have a clean bill of health, Kobe’s slightly gimpy ankle notwithstanding. Unfortunately Dallas cannot claim the same fortunes.

The Mavs will be playing this series like they have the second half of the season, without Caron Butler. While Caron Butler may not be an all-star caliber player, his presence on the Mavs took them to a level rarely seen before. Don’t believe me? Here are the top 5 line-ups in the league based on plus/minus adjusted for the level of the competition.

Boston’s big 4 are featured twice, the "Heatles" make the list, as well as the Lakers starting unit but none come close to the production of the Mavericks line-up with Caron Butler (+26.0). In fact, based on www.basketballvalue.com this is the best line-up in the league over the last four years (as far back as the website has data). A healthy Butler would have likely meant the Lakers not having home court advantage this series in addition to facing a much more potent Mavs squad.

Will the Lakers continue to have fortune shine down on them?  Perhaps a favorable call or bounce of the ball on the rim in a close game? They say it is better to be lucky than good. For the Lakers, it sure is nice to be both.