Kindly Shut The Hell Up, Kareem

Share All sharing options for: Kindly Shut The Hell Up, Kareem

I don't understand. It's either an oversight or they're taking me for granted. I'm not going to try to read people's minds, but it doesn't make me happy. It's definitely a slight. I feel slighted.

And just in case that didn't sound pissy and self-entitled enough, he proceeded to issue a statement through his business manager:

I am highly offended by the total lack of acknowledgement of my contribution to Laker success. I guess being the linchpin for five world championships is not considered significant enough in terms of being part of Laker history.

A "total lack of acknowledgement"? What would you call this exactly? 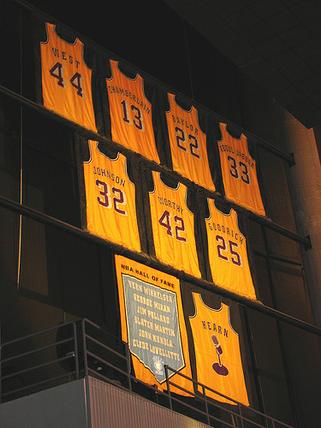 You see that jersey in the upper right, Kareem? The one that says "Abdul-Jabbar"? That's yours. The Lakers franchise has permanently retired your number, which is the customary way for NBA teams to immortalize their all-time greats. And when you retired, the team gave you a Rolls-Royce Silver Spirit, and Jerry Buss paid to have a lighted tennis court installed at your home in Hawaii.

I would love for someone to take me for granted this badly.

But it gets worse. Instead of ignoring Kareem's passive-aggressive bitching and tending to matters of actual importance, team spokesman John Black issued a very gracious response:

We've been at Staples Center 11 years and have two ex-players who have statues now. It's not like we do it every year; we have no timetable. Whenever we do the next statue of the third Los Angeles Lakers player, it (will be) Kareem - and he has been told that.

Great! Issued settled, right? We can all move on? Of course not. Kareem had NOT YET BEGUN his campaign of nauseating self-pity. He took to the twitters to drop these gems on us (I've edited out some hashtags and @ replies):

Rumor has it that I will be getting a statue. A caveat for all my fans-don't hold your breath. Lakers don't care about me.

Magic waited 8 years to be honored in that way. So maybe I am chopped liver?

A slight is a slight. There is no bitterness. Laker fans have always let me know that they appreciated me. That is sufficient.

Well, obviously it's not sufficient. But hey, at least there's no bitterness!

Look, I have no idea why Kareem is so bent over this. What he's doing, though, is treating us to the spectacle of someone really rich and really famous complaining that the world isn't kissing his ass enough. It's hard to imagine a less endearing display, or a PR strategy more likely to alienate Laker fans and piss off the organization.