A Look Back at Lakers-Mavs and My 5 Keys

Share All sharing options for: A Look Back at Lakers-Mavs and My 5 Keys

Two weeks ago I previewed the Lakers – Mavericks series and identified five key items to watch during the series. I don’t mean to boast but I think I may change my name to Nostradamus after my predictions proved accurate. The first key was the impact of Dirk Nowitzki and how great the Mavs are when he is on the floor but how poor they are when he is not. For the series the Mavs were +22 points per 100 possessions with Dirk and -5 without him. I also said

"While Pau is truly a great player, giving him the title of best power forward in the league is a huge slight to Dirk Nowitzki. Dirk was been a perennial All-Star and a much deserved MVP, yet he is still vastly underrated by most."

I won’t bother to post a comparison of Pau and Dirk’s stats as I would be guilty of cruel and unusual punishment to Pau. It suffices to say that I don’t think anyone is making the mistake of choosing Pau over Dirk as the game’s best power forward anymore.

My second key was to watch out for a specific Mavs line-up. I said

"The Lakers really struggled when Jason Terry, Shawn Marion, and Dirk were on the floor together and it didn’t matter which Lakers were out there either."

For the series the Mavs outscored the Lakers by 18 points per 100 possessions with those three on the floor. In full disclosure though, nearly every Mavs line-up had a similar impact so I guess I shouldn’t give myself too much credit here.

My third and fourth keys were offensive rebounding and turnovers. I discussed how the Mavs are a poor offensive rebounding team and thus would likely fail to take advantage of the Lakers poor defensive rebounding. Sure enough the Mavs only grabbed 21.1% of their missed shots in the series, a rate which would have put them dead last in the league this year. As for turnovers, both teams do not force turnovers and play at a slow pace so I was expecting few turnovers from both teams. Other than the blowout game 4 in which things got sloppy, the Lakers averaged only 10.7 turnovers and the Mavs 12.0. By comparison the league’s best average for the season was 13 so both teams were terrific in taking care of the ball.

My fifth and final key was the role that Lady Luck would play. I did not predict whose side she would take (Nostradamus often made vague predictions) but that she could play a vital role in the series, and boy did she ever. Lady Luck decided to put on her "three goggles" and completely determine the outcome of the series. Believe it or not, the Lakers outscored the Mavs in 1’s and 2’s in all four games (the margins were 10, 6, 21, and 9) but were completely dominated by the Mavs from behind the arc (losing by 12, 18, 27, and 45). The Lakers were outscored by 102 points from behind the arc in the series. It should be noted that the Mavs are a team that uses the three-point shot as a significant part of the offense, where as the Lakers focus on dominating inside, so an advantage for the Mavs was somewhat expected, but not a 25 point advantage each game. Here is the game by game breakdown of the three-point shooting:

It is quite obvious that not only did the Mavs have an epic series shooting the ball, but the Lakers had an equally epic series launching bricks from deep. But just how rare is it for these teams to shoot like this?

Let’s first take a look at the Mavs. With the help of www.basketball-reference.com we can search for similar shooting streaks. Going back to 1980 (when the Mavs joined the NBA) they have had only three streaks in which they made at least 8 three-point field goals on over 32% shooting from deep in four straight playoff games. The list of streaks can be seen in the table below. Interestingly one of the other two streaks occurred in the previous series against the Trailblazers. The only other similar streak was back in 2003 during the Nash-Nowitzki era. The games against the Lakers though was the most impressive as they shot the highest three-point percentage on the highest number of attempts. Basically this was the best four game streak of shooting the three the Mavericks have ever had in their playoff history (31 playoff series to date).

Game 4 was particularly incredible. The Mavericks connected on 20 of their 32 attempts tying an NBA playoff record. The NBA has played over 35,000 regular season and playoff games since 1980 and only 9 times has a team made at least 20 threes (see list below). Interestingly, this season’s Lakers are the only team to be on the list twice as the opposition and both occurrences came this year. 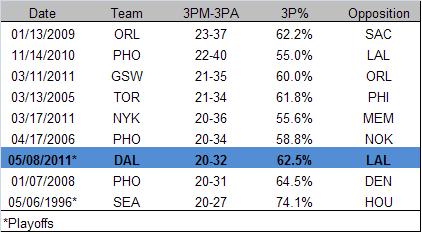 There were some equally impressive individual results in game 4 as well. Jason Terry made 9 of 10 threes in game four. Prior to that, he had never made more than 7 in any game (regular season or playoffs). He has played in 1,031 games in his career. Peja Stojakovic made a perfect six-for-six from behind the arc. Prior to that game he had only made 6 threes in one of his previous 85 playoff games. Additionally he had never made 6 or more threes without a miss in his 890 career games. The fact that both Terry and Stojakovic’s career games came on the same night makes the occurrence even rarer.

For the Lakers, things were exactly opposite. The Lakers are not and have not been a good three point shooting team for years. But how rare was this run of cold shooting? Since the three-point shot was implemented in 1979, the Lakers have NEVER played 4 consecutive games where they made fewer than 26.3% from beyond the 3pt line while taking at least 13 attempts. They have had 5 other occurrences of poor shooting over a three game span but never four games (see table below). This was a new low in Lakers shooting. Interesting side note, four of the Lakers six streaks shooting so poorly have come in the Pau Gasol era.

The Lakers have been a very poor three point shooting team the last few seasons. The Lakers supposedly had improved in this area with the acquisition of Steve Blake in the offseason, a player who was neck and neck with Ray Allen and Reggie Miller in career three-point shooting percentage. Unfortunately Blake had a rough outing this series capped off by going 0-5 in game 2. He has had only two other games in his career (602 games) in which he finished 0-5 or worse and this was the only game that occurred in the post season.

Lady Luck certainly chose to put on a Mavs jersey this series and helped propel them to a record breaking night (game 4) and the best shooting series in the team’s history. She helped guide the release of Terry and Stojakovic to career best games as well in terms of makes (Terry) and accuracy (Stojakovic). On the other hand, she did everything possible to keep the Lakers from making threes on the other end. The Lakers had the worst four game stretch shooting the three in the franchise’s entire history and the sharp shooter brought in had one of his worst games when it mattered most.

Like my previous four predictions, I was correct when I said that Lady Luck would impact the series in a significant way.  And yet I, like all my brethren and most of basketball’s analytical world, predicted a Lakers victory.  Just goes to show how much we expect Lady Luck to be wearing purple and gold.