What a delightful week this was in Lakerworld. It began with the champs on a 17-1 killing spree, laying waste to (nearly) all who dared opposed them. It ended with four consecutive losses, two to lottery teams and two to opponents who, while perfectly decent, aren't exactly great bets to see the third round of the playoffs. The latter category includes the Portland Trail Blazers. This evening, despite the absence of their best defensive player (Marcus Camby, out with a neck strain) and having played just last night in Utah, the Blazers threw the Lakers head-first into the turnbuckle in a 93 to 86 victory. Don't let the seven-point margin of defeat fool you: this was a blowout for a good portion of the night. Only through a pair of stat-padding Derek Fisher threes in the last 12 seconds were the Lakers able to finish within a single digit of their hosts.

The unifying theme of this losing streak has been an offensive attack of profound ineptitude, and you better believe the Lakers kept that going in this one. For the fourth straight game, they failed to crack a point per possession. To put that in perspective: over the season's first 75 games, the Lakers scored below a point per trip only eight times. They've now done it four more times in four tries. Even by their usual standards of late-season slumpage, this is an impressive collapse.

We can dismiss these struggles all we want - and I, like most of you, firmly believe they'll play much better come playoff time, if not sooner - but it's starting to cost them in the standings. The Lakers are now tied with the Celtics and Heat. I walked through the tiebreaker situation in my preview today, so I won't do so again here, but suffice it to say we should root for Boston to beat Miami when the two teams face each other on Sunday. Also, the Mavericks, whom we'd kind of written off, are now just a game back, and the Thunder, whom the Lakers play on Sunday, are just two back. If the Lakers don't snap out of it soon, finishing fourth in the West and having home-court advantage for only one round of the playoffs isn't out of the question.

But back to tonight's game and the problems on offense. There were so, so many. To begin with, the turnovers are still flowing in waves. Tonight there were 17, for a grand total of 73 over four games. But unlike in other contests this week, the Lakers' passing wasn't that bad: only four of their turnovers resulted from errant passes. The rest were a delicious combo platter of offensive fouls, traveling calls, stripped balls and three-second violations.

When they weren't generously handing the ball over to Portland, the Lakers were failing to establish either Pau Gasol or Andrew Bynum as offensive threats. Frankly, they were barely even trying. To paper over the absence of Camby, the Blazers' defensive strategy was to side-front Gasol aggressively to deny the entry pass. It worked. The Laker offense never ran through Pau in the post, and there was never any adjustment to counter Portland's fronting. No over-the-top lobs, no quick ball reversal and entry from the other side, nothing. As for Bynum, he might as well have sat this one out. Perhaps still dealing with the effects of a nauseating breakfast earlier today, Drew took only three shots, collected just six rebounds and fouled out. He never really worked to make himself available for entry passes, and no one ever really looked for him.

Points for the Lakers came in short, ineffectual bursts. In the last three minutes of the first half, Kobe Bryant got hot from outside and scored 13 points. Otherwise he struggled with his shooting touch, and for the game he needed 26 shots (including free-throw possessions) to get 24 points. At the end of the third period, the bench unit capitalized on a bunch of missed Portland threes to score in transition. And with about five minutes left, Kobe, Ron Artest and Lamar Odom teamed up for another 13-points-in-three-minutes surge to make the endgame almost interesting. But there was just too much derpness to overcome. Shannon Brown and Steve Blake, who are working on doctorates in the field of applied derpitude, combined to shoot 4 for 14. 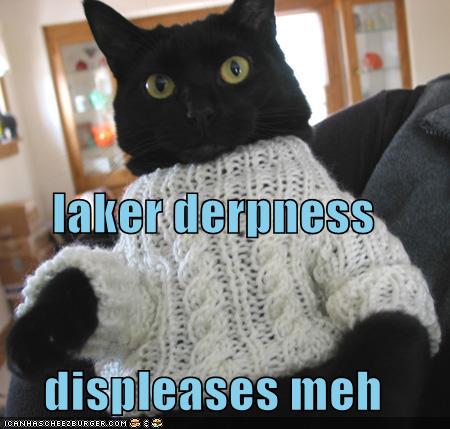 The Blazers had a rough night from beyond the arc (6 for 21) and got mostly shut out on the offensive glass, but they did a number of other things really well. Early on, they punished the Lakers' lazy transition D with a flurry of east fast-break scores. In their halfcourt sets they exposed yet again how horrible the Lakers can be defending the pick-and-roll and pick-and-pop. Over and over, multiple screens resulted in a dive man rolling unchecked to the hoop and receiving a delicate lob feed from Andre Miller.  LaMarcus Aldridge functioned as the world's tallest shooting guard, parking himself 18 feet out and daring Gasol and Bynum to close on him, an invitation they politely declined. As a result Aldridge dropped in one jumper after the next en route to 24 points. The Blazers got almost nothing out of their bench, but all of their starters had nice games.

There was a late tactical adjustment that's worth noting. Starting with about six minutes left, Phil Jackson switched Kobe onto Andre Miller and put Derek Fisher on Wesley Matthews. We've seen this before when the Lakers have had trouble with point-guard containment - as, for example, against Russell Westbrook in last year's playoffs. No doubt we'll see it again if the Lakers and Blazers meet in the first round.

That, however, has become less likely with this Portland win. They remain half a game up on New Orleans, and if current standings hold, it's the Hornets who'd be visiting Staples next weekend. Of course, current standings won't hold unless the Lakers decide to put in an honest day's work in their final three games.