Share All sharing options for: Lakers 90, Nuggets 95: Keep Calm And Carry On

We knew there'd come a day like this. We didn't know exactly when, but deep down, we knew this Lakers team wouldn't stay locked in forever. Eventually they'd show up to work dragging ass and in need of some Five Hour Energy Drink. In fact, what's most striking about today's game, a 90 to 95 loss to a Denver Nuggets team on a serious roll of its own, isn't that the Lakers failed to close or that for most of the afternoon they lacked verve and attentiveness. It's that performances like this have become the exception, rather than the rule. In years past, it was standard operating procedure for the Lakers to mail it in come late March and early April. But their 17-1 rampage after the break had imbued Lakerdom with a nearly unflinching optimism. Today's a reminder that the occasional flop is inevitable. Clunkers happen. Perspective is a healthy thing.

Earlier today, the Spurs broke their six-game losing streak with a victory over the Suns, so the Lakers' L drops them 2½ games back of the NBA pacesetters. That race isn't quite over, but it's getting there, and the Lakers no longer control their own fate. Of greater long-term concern are the lower-body joints of Pau Gasol and Andrew Bynum. Pau left today's game early in the third quarter after he maybe hyperextended his right knee a bit. Although he returned to the game and seemed to be moving around OK, there was soreness and swelling afterward, and Mike Bresnahan of the Times reports that he'll have an MRI tomorrow. Bynum, for his part, sat the final 7:15 of the game after tweaking his knee, but Kevin Ding reports that he "should be fine." Fingers crossed for both of these bros.

Today's contest was a defensive struggle (or, to put it less charitably, an offensive slopfest) from the outset. Both teams looked like teenagers dragged out of bed to do tedious household chores a bit too early on a weekend. The Nuggets scored only 40 points, or 0.80 per possession, in the first half, thanks to some obscenely terrible shooting from their backcourt. At halftime, Ty Lawson, Wilson Chandler, Raymond Felton and J.R. Smith were a combined 2 for 19. The Lakers' lead, however, stood at just seven because they weren't shooting that well either and were handing the ball over like it was made from plutonium and coated in fecal matter. Nine first-half turnovers poisoned the Lakers' offensive attack, an alarming development given that Denver was without two of its best defenders in Arron Afflalo and Chris Andersen, both sitting with injuries.

Since the All-Star break, the champs have made a habit of letting teams keep it close for a half before detonating them in the third quarter. It became clear shortly after halftime that the pattern wouldn't hold today. In their first 12 possessions after the break, the champs committed five more turnovers and scored only nine points, which allowed the Nuggets, who rediscovered their shooting touch, to tie the game.

Gradually but noticeably, the defense began to crumble. At the beginning of the fourth, George Karl deployed a three-guard lineup of Lawson, Felton and Smith that gashed the Laker D with quick drives and savvy dishes. Meanwhile, at the other end of the court: MOAR TURNOVERS.

The Lakers committed 11 in the second half and 20 for the game, and in case you're interested in how they break down, you know I got you:

You're sorry you asked now, aren't you? That is just some horrible, horrible passing, from a team that's been sound with the ball all season long. 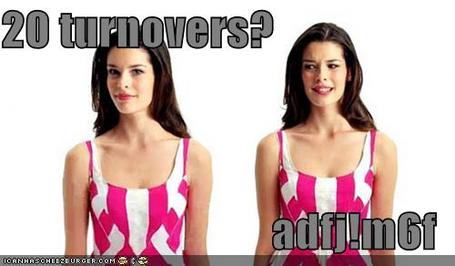 Not much went right for the home team down the stretch. They scored seven points in their last 11 possessions as the Nuggets held them at arm's length. The deathblow came with 11 seconds remaining, with Denver up three and Nene at the line shooting the second of two free throws. The shot rimmed out, but Kenyon Martin overpowered Lamar Odom for the board and the tip-in, evoking unwelcome memories of Antonio McDyess and a home loss to the Spurs in early February. Of course, there's no assurance that the Lakers would've captured the win even if Lamar had controlled the rebound, as the Lakers would still have had to convert a three at the other end and then likely play an overtime period, but the sequence dropped the champs' win probability to zero percent.

It's hard to identify a Laker who acquitted himself well today. Although Drew was pretty effective when on the court, he was a nonfactor in the second half. Pau Gasol had a decent shooting day but was stripped of the ball twice late in the game when the Nuggets made their decisive run. Kobe Bryant shot the ball poorly (10 for 27) and spent more time complaining about noncalls than helping out in transition D. Derek Fisher and Ron Artest (3 for 13 combined) couldn't get anything to go down. Odom was the team's best offensive option in the second half but was off his game in the first. And of course, his failure to box out Martin will haunt him.

Credit the Nuggs for doing just enough to punish the Lakers for their lethargy. They shot well from behind the arc (7 for 17) and showed great ball-hawking instincts. Danilo Gallinari (22 points on 7 for 13 shooting) was the game's offensive star. Odds are against our seeing them in the playoffs, but it would be a fun series if it came to pass.

Next on the champs' dance card are the Jazz and the Warriors in a Tuesday-Wednesday back to back. The first game is at Staples, the second in Oakland. The winning streak may be over, but the charge for the three-peat moves on.