Ron Artest - Give Credit Where Credit is Due

Share All sharing options for: Ron Artest - Give Credit Where Credit is Due

Yesterday Ron Artest was presented with the J. Walter Kennedy Citizenship award for his outstanding service and dedication to the community. Ron has brought awareness to the very serious issue of mental health, particularly in youth. The contributions that Ron has made with both time and money (including raffling his championship ring off for charity) put him in the spotlight again, but this time for all the right reasons. While I could write an entire article on the transformation that Ron has made with his life and career, that would not be my forte. My strength as a contributor on this wonderful SS&R site is based on illuminating statistics, not illuminating prose, and thus I don’t feel I could do Ron the justice that such a story deserves. Instead, I would like to talk about the contributions that Ron is making on the court as they have somehow been lost in the numerous storylines of this drama-filled series.

Not on that list is perhaps one of the biggest stories of this post-season for the Lakers thus far, the superb play by Ron Artest. His play has been lost among the stories around the superstars and when he did make headlines it was for the much deserved citizenship award. It is time to give Ron some credit where credit is due because quite frankly he has been arguably the best player for the Lakers in this series.

Ron Artest’s biggest contributions usually come at the defensive end. When given a superstar opponent on the wing, Ron takes the challenge head on and usually wins the battle. This series against the Hornets is exactly the opposite. They possess no superstar wing player for him to guard and thus his greatest skillset is not being utilized. Historically, without that challenge it can be tough for Ron to maintain focus and intensity on the court. That is what makes his play this series so impressive. He has accepted the fact that there isn’t a superstar he can guard and instead shifted his focus to the offensive end and is producing more efficiently than any other Laker.

Ron is not being asked to break people down off the dribble or generate offense for others, which is probably why his performance has gotten very little attention. He is simply asked to contribute when called upon and has done so marvelously. His offense game this series has been very simple yet extremely effective. He has spent almost the entire series in one of two places on the floor: weakside behind the arc or strongside on the low block.

When Ron is on the weakside of the triangle he camps out in the corner behind the arc. Whenever a double team occurs on the strongside and the ball is kicked out and swung around to the weakside, it lands in Ron’s hands with an open look at a three. He hasn’t hesitated to take the shot and has connected on 7 of his 16 attempts (44%). From an efficiency standpoint that is the equivalent of 66% on two point shots.

When Ron is on the strongside he will drop down to the low block and exploit the size and strength advantage he has over the Marco Belinelli. The Lakers have done well to feed him the ball in these situations and Ron has rewarded them by converting 11 of 16 attempts at the rim (69%).

Perhaps the biggest contribution he has made has been his shot selection. By taking only weakside threes and strongside lay-ups, Ron is taking most of his shots from the two positions on the court that yield the most efficient results. His improved shot selection and increased shooting percentage has led to an unbelievably high shooting efficiency. How high? 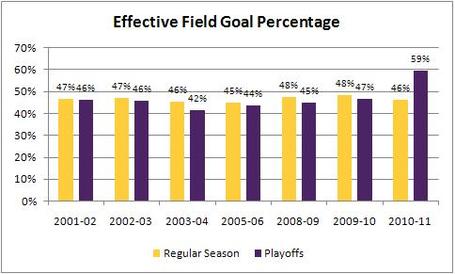 The chart shows that Ron has consistently had an effective field goal percentage in the range of 45% to 48% most of his career. In this year's playoffs it has jumped significantly to 59% (purple bar on the far right). For comparison Dwight Howard had an eFG% of 59% on the season which was good for 2nd best in the league. Ron has been that good shooting ball.

Shooting is not the only area on offense where Ron has seen a significant improvement though. Just as his size and strength provided an advantage posting up the smaller Belinelli, it has also allowed Ron to be extremely effective on the offensive glass despite not having the ability to sky for rebounds. Ron has used his lower body strength to move his defender out of position and then his upper body strength to shield him away with one arm while grabbing the rebound with the other. It is a thing of beauty to see someone be such a force on the offensive glass despite not being able to jump over the thickness of his wallet (despite its reduced size after all of his charitable donations). 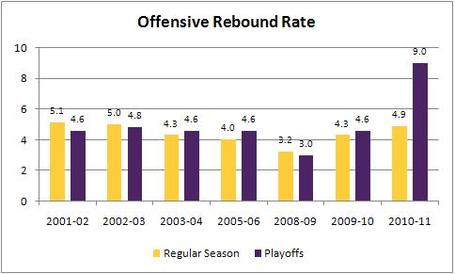 The chart shows that Ron has almost doubled his offensive rebound rate this series compared to his historical average. For comparison, his rate of 9.0 would fall just below Pau Gasol (10.3) and above Lamar Odom’s (7.8) season average. Basically Ron has given us the offensive rebounding production of a top tier power forward or center at the small forward position.

Not much was expected from Ron this series as there is no elite wing scorer for him to shut down. Rather than relax his focus and motivation and go through the motions, he has instead stepped up his play on offense. He has turned the size and strength that makes him an elite defender into offensive advantages, dominating as a post-up presence and on the offensive glass. His superb shooting from beyond the arc has put points on the scoreboard and helped keep the floor spaced. It was appropriate that he was recognized for his contributions off the court yesterday, and it only seems appropriate that we recognize his contributions on the court today.