All-Time Playoff Records in Striking Distance of the Black Mamba

Share All sharing options for: All-Time Playoff Records in Striking Distance of the Black Mamba

The playoffs are here and the Black Mamba is on the attack. He's scored 30 or more points in two of the three games so far, bringing his career 30-point playoff game total to 80, second only to Michael Jordan's 109. Kobe Bryant has played in 201 playoff games in his career so he has exceeded the 30-point mark in roughly two out of every fivegames. In order to pass Jordan at that pace, he would need to play another 75 playoff games. To put that in context, the Lakers played 67 games over the last three playoffs. Kobe and the Lakers would need quite a run the next few years to make that milestone obtainable. While the odds may be against Kobe for that record, there are other playoff records well within striking distance. 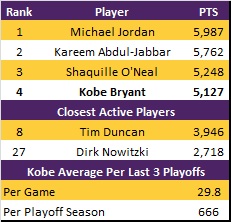 Kobe currently sits in the 4th spot and will likely move past former teammate Shaquille O'Neal into 3rd sometime during the next round of the playoffs. Perhaps more interesting though is that Kobe has averaged 666 points in each of the last three playoff runs, and if the Lakers play their way into a 4th consecutive NBA Finals appearance he should finish right next to Kareem Abdjul-Jabbar and possibly pass him for number two all-time. If the Lakers can avoid being the victims of an early upset this year and next, Kobe will certainly pass the great Michael Jordan for the #1 spot all time.

It's a spot that Kobe would likely retain for a long time. A few more deep runs in the playoffs and Kobe could finish with almost 7,000 career playoff points, well ahead of anyone else on the list. As for other players catching him, the two closest active players are Tim Duncan and Dirk Nowitzki, neither of whom is all that close. In fact, no other active player is even halfway to Kobe's total.

While a scoring record for Kobe is not a surprise, there are other playoff records that may be.

Given Kobe's position on the all-time playoff points list, it shouldn't be a surprise to see him near the top of the list for field goals or free throws. What may come as a surprise to many is his position on the list of three-point field goals made. Kobe currently sits tied in the #2 spot with the all-time regular season leader, Ray Allen. They both trail the previous all-time regular season leader, Reggie Miller. When people think of the NBA's best shooters Kobe Bryant rarely makes the list. as he doesn't exhibit the same sniper-like efficiency of players like Allen or Miller. He does, however, have the ability to get into the zone and catch fire NBA Jam-style and absolutely burn the nets from deep. For instance: Kobe holds a share of the NBA record for threes in a game with 12, something that Allen or Miller do not have.

Kobe will likely finish either #1 or #2 all-time on this list when he retires. He's almost certianly going to pass Miller as he needs only two more deep playoff runs to do so. The biggest challenger he has is Ray Allen, who hits more threes per game than Kobe. Will Ray play enough games in the remainder of his career  to hold off Kobe? Only time will tell.

As for field goals and free throws, Kobe is currently #4 in both but will likely finish at the top of the list when he finally hangs it up. He needs two deep playoff runs plus a round or two to finish atop the field-goal list, certainly within reach given the Lakers roster. He will move into the #1 position for free throws sometime in next year's playoffs.  The list of current active players also offers no immediate threats to Kobe's standing on these all-time lists. 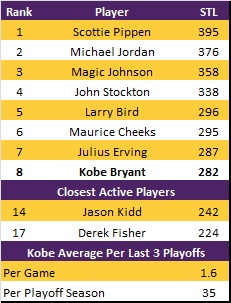 Here's a list that many probably didn't realize Kobe was on. Kobe has long been a superb defender, as evident from his 10 All-Defensive team selections. The only knock on Kobe defensively has been his periods of relaxed play on that end. In the playoffs, though, the moments of relaxed defensive focus are few and far between. As a result he's amassed a large number of steals and thus sits 8th on the all-time list. The list is pretty condensed, so Kobe will likely move past Julius Erving, Maurice Cheeks and Larry Bird in the second or third round this season. After that there's quite a gap between each of the remaining names. A deep run to the finals this year would put Kobe around 310 steals. He would still be 85 short of defensive ace Scottie Pippen for first all-time. The Lakers would need at least two more trips to finals after this season for Kobe to catch him.

The only two active players even remotely close to Kobe are Jason Kidd and fellow teammate and Lakers bulldog Derek Fisher. Neither is any threat to pass Kobe. While reaching #1 may be a long shot, Kobe is almost certain to finish at worst fourth in this category, right next to fellow Lakers legend Magic Johnson. 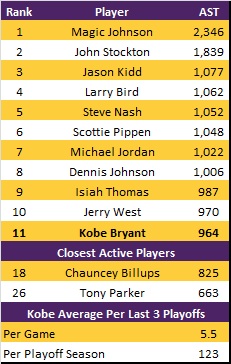 This has to be the most shocking list to see Kobe's name on given the media's incessant claims of his ball-hogging nature. Sure he currently resides at only the #11 position, but this list is also rather condensed. Kobe has averaged 123 assists over each of the last three playoff runs. Another trip to the finals would probably yield another 110 assists this postseason and bring his total to around 1,074, which would launch him from #11 all-time all the way up to #4. The only players still ahead of him would be the trinity of arguably the top 3 point guards in history: Magic Johnson, John Stockton and Jason Kidd.

Kobe has no chance at catching either of the first two Hall of Famers, but Kidd could be passed depending on how long he plays and how far Dallas makes it in the playoffs. If the Lakers continue to make a deep run or two over the next few seasons and Dallas continues to play only one or two rounds, there should be enough games in Kobe's favor to move him past Kidd.

Once again there are no other active players currently threatening to catch and pass Kobe. Only two have more than 600 assists, Chauncey Billups and Tony Parker. Billups is an older point guard that will probably retire before Kobe and is not on the type of team to make a deep playoff run. Parker on the other hand is younger and on a solid team, but the gap between him and Kobe is very large and will likely result in Parker falling short.

It's not surprising to see Kobe charging to the top of the playoff scoring list. Finishing near the top in threes, steals, and assists is more unexpected. Assuming that Kobe and the Lakers were to make the finals this year, the conference finals next year, the second round in 2013, and just the first round in 2014 (the last year of Kobe's current contract), Kobe would likely finish #1 in points (including #1 in the trifecta of field goals, threes, and free throws made), #3 in assists, and #3 in steals.

It's a testament to Kobe's all-around ability as both a scorer and facilitator along with his defensive greatness to finish with such lofty totals. Obviously the all-time playoff stats are greatly influenced by the number of playoff games played and Kobe has been the beneficiaryof playing for teams that have made it to 7 NBA finals and counting. However, he has been the engine (or at least engine 1A) for all of those teams and has driven them to success. Perhaps that speaks to Kobe's greatest strength of all - winning - and why he will likely find himself at the top of one more list when he retires: Most All-Time Playoff Wins.