When the Lakers were tearing through the league after the All-Star break, piling up signature wins one after the next, their identity was grounded in defense. The rise of Andrew Bynum transformed the champs' halfcourt D into an instrument of cruelty and suffocation. But they fell into some bad habits as the regular season drew to a close, and in Game One of their playoff series against the Hornets, their defensive performance could scarcely have been worse. Disorganized, a step slow both mentally and physically, they were embarrassed by Chris Paul and his usually unremarkable supporting crew. To even the series at one victory apiece, Phil Jackson had to spend the past few days reinstalling discipline, aggression and sound technique at the defensive end of the floor. His efforts, we saw tonight, were a success.

The Lakers took Game Two, 87 to 78, thanks to vastly improved work against CP3 and the return to form of Andrew Bynum, Defensive Predator Par Excellence. After scoring an altogether unacceptable 1.20 points per possession in Game One, this evening the Hornets were held to 0.92 points per trip. Paul had another very strong game, but he wasn't the hellwrath we saw on Sunday. Phil threw a variety of coverages at him. Derek Fisher, Steve Blake and Ron Artest all took brief turns on CP3 detail, and there were even occasional double-teams out on the perimeter. For the most part, though, Phil assigned Kobe Bryant to Chris Paul, with instructions not to switch on screens, a tactic that resulted in some horrifying mismatches in Game One, but rather to chase him hither and yon. Despite a couple dumbish fouls and an off shooting night, Kobe's defensive was influential in forcing the ball out of Paul's hands early in possessions and quieting the Hornets' attack.

In Game One, Paul was able to keep the ball in his hands and dish to his teammates only after dribble penetration had broken down the Lakers' halfcourt D and created open looks. Having Kobe in his face tonight clearly discomfited him. His first passes were early in the shot clock and put pressure on Marco Belinelli, Willie Green and Trevor Ariza to create their own offense. Ariza had a really nice game, but Belinelli and Green regressed badly from their Game One performances. Tonight they combined for nine points on 16 shots (including free-throw possessions). Likewise, Aaron Gray and Jarrett Jack, who killed the Lakers on Sunday with high-efficiency scoring, stank it up pretty badly in this one.

The Hornets as a team saw their turnover count soar through the roof. In Game One they coughed the ball up only thrice. Tonight they did so 16 times. Moving picks, forearm clearouts, three-second violations... all the little errors they managed to avoid last time around came in waves this evening. Some of it was unforced, but some of it was because the Lakers played defense with speed and hostility. Bynum in particular was a force. He roamed all over the place, from hedging pick-and-rolls outside the three-point arc to disrupting shots in the paint. He played just 32 minutes and fouled out, but when you take stock of his towering defensive contributions alongside his 17 points on just 12 shots, he's the clear choice for man of the match. 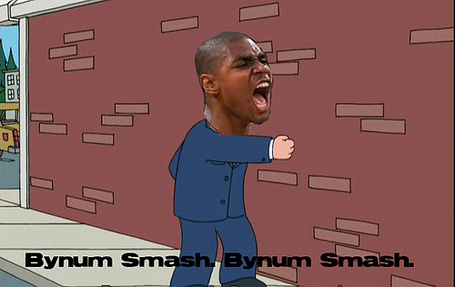 On offense, the Lakers enjoyed a second consecutive productive night from Ron Artest. Most gratifying, though, was the performance of Lamar Odom. In case you missed it, Odom was the target of an idiotic hit piece in this morning's Los Angeles Times, in which Bill Plaschke, our city's great purveyor of appalling prose and cheap provocation, insinuated that Lamar played poorly in Game One because his reality show has exposed him as a henpecked husband under the thumb of the Kardashian clan. No joke: you can read the thing here. It's a poorly reasoned slice of tossed-off hackery that the Times should be embarrassed to have run.

Tonight Lamar was so distracted by Khloe and his reality show that he scored 16 points on 8-for-12 shooting, pulled down seven rebounds and helped the bench function more effectively than it has in weeks. If you think this'll lead to an apology from Plaschke, clearly you're not familiar with the man's work.

Not everything went the Lakers' way in this one. The backcourt shot atrociously. There were seven missed free throws in 22 attempts. And Pau Gasol had yet another game of all too meager contributions. After putting up an 8-and-6 on Sunday, he went 8-and-5 tonight. For whatever reason, his offensive game is totally lacking in confidence and dynamism right now. Carl Landry and Aaron Gray are uprooting him from the post, and he's not coming up with any creative countermoves. In his defense, he did some nice work on the offensive glass, but obviously the Lakers need much more from him.

The series now moves to New Orleans Arena for games on Friday and Sunday. It's Monty Williams's turn to search for adjustments. Gasol isn't the only struggling big man in this series: Emeka Okafor can't stay out of foul trouble and has been ineffectual in those brief stretches when he's on the floor. Monty needs to elicit more from him and figure out how to prevent Bynum from swallowing up everything near the hoop.

I will say this: the Hornets are competing hard. They may be overmatched talentwise, but they're determined not to go down quietly. Anyone worried that an easy first-round series wouldn't prepare the Lakers for more difficult battles ahead can probably put their concerns to rest.