Share All sharing options for: In the Belly of A Dying Beast - A Laker Fan's Journey into #HereWeStay

Editor's Note: As words and pictures and videos pour in from across the internets, it has become exceedingly clear that the fans of the Sacramento Kings went through a profound experience last night.  Understanding what they went through without having been in the same position would be impossible.  But what about those for whom the game had no extra meaning?  What would it be like to bear witness to an historic night without being directly affected by its history?  SSR's man on the scene, bluexfalcon, brings you a photo chronicle of the experience.  What started out as just another trip into enemy territory, the normal routine for any ex-pat sports fan, turned into much more than just the annual opportunity to see his favorite team.  True understanding may not be possible, but the poignance of the moment was not lost, and in the end, besides the thrill of victory, all that remained was respect and sympathy for the plight of his rivals - C.A. Clark

Phew! Wow, what a game.  Everyone was thinking the Kings were going to go out nice and quiet when they were down 18 to start the 4th Quarter.  Lakers just can't make things easy, can they? A quick Kings run ignited the crowd, sloppy Lakers Offense contributed to the cause, and brick after brick were handed out by the Lakers to make the impossible, reality.  You could feel the energy and excitement in the building, there was a definite buzz in the air and the fans stood on their feet as the Kings clawed back within 6..4..1..then took the lead.  It was bananas.

But before that amazing (and hopefully not the last) run by the Kings, let me take you back to the beginning.  I've been to 3 games at ARCO Power Balance Pavilion before, so I know the routine.  Doors open one hour before tip-off, so that meant I had to be there around 6p.m. to get a sweet spot in line.  I walked up and was warmly met by the great PBP. 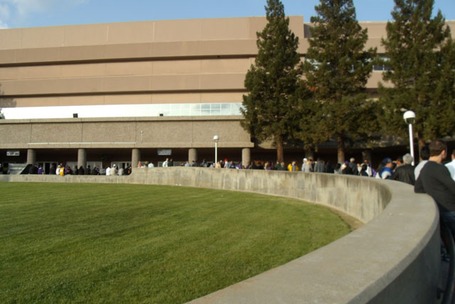 Ok, so that warm reception talk was a lie. The building doesn't even look like it houses a professional basketball team.  The logo that should have been there was the old ARCO one, but it was obviously taken down.  Notice the lines?  Apparently people were showing up at 5pm, and much to my chagrin, I was left waiting at the very back.  But your boy is a smart cat. See, I strolled up to the front because I know they form three lines for three doors. The line you see was just one big line, and I assumed many of these fans had never been here before.  Anyways, I walked up and secured a better spot in line, on another door.

Now, here is where the fun began. I made my way down to the usual spot, where they let fans take pics. I cut my way through and was able to stand directly behind the Lakers press area.  Here are some pictures: 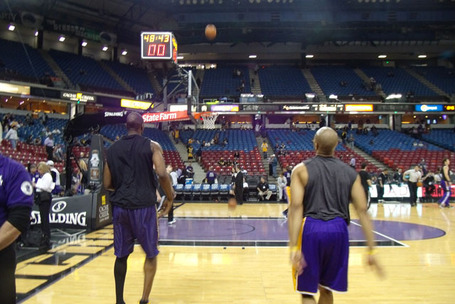 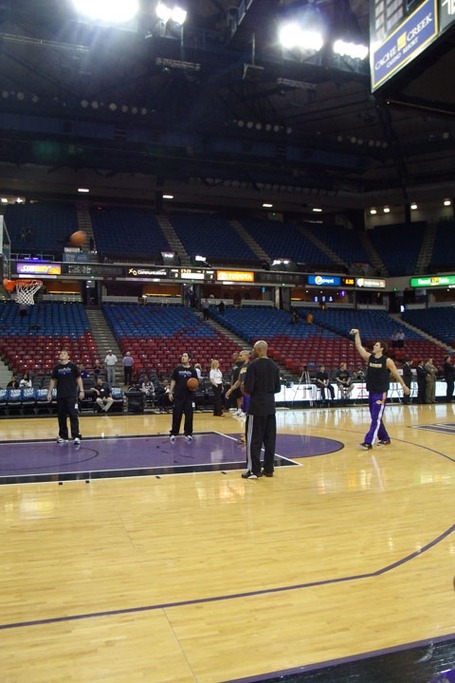 Joe Smith aka #Yessiirr... and Derek Fisher warming up.  Luke Walton taking some shots too.  Lots of fans were behind me at this point, some were yelling the usual "Hey Derek!... Wassup?" or another favorite of mine "Hey Luke, where is Bill?"  There was this guy getting a little rowdy to my right, he kept talking about Lakers-Kings 2002.  He was wearing a Kings hat with a Kobe jersey.  Yea, made no sense to me either. 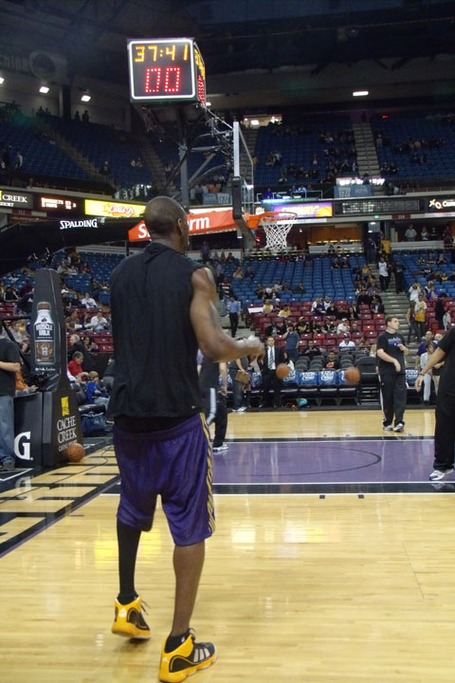 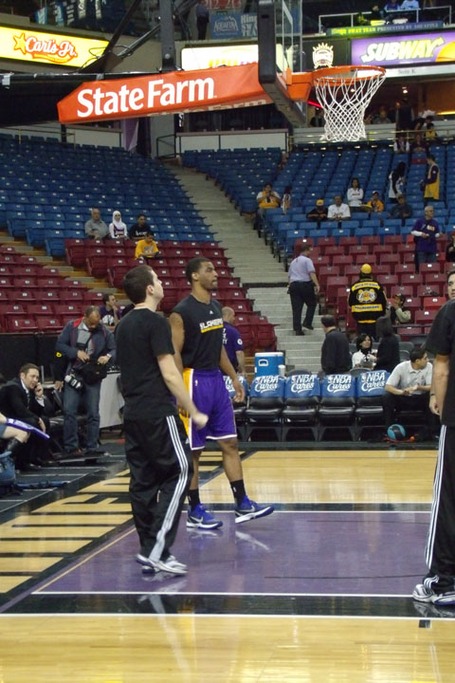 Trey Johnson! aka MVP 2016. It was funny, Trey (does he go by TJ?) took a few shots then went to work as ball-boy for Fisher, JoeBeast, and Walton.  Rookie duties right thurrrr.  At this point, Lamar and Pau came out.  And the crowd goes wild!! 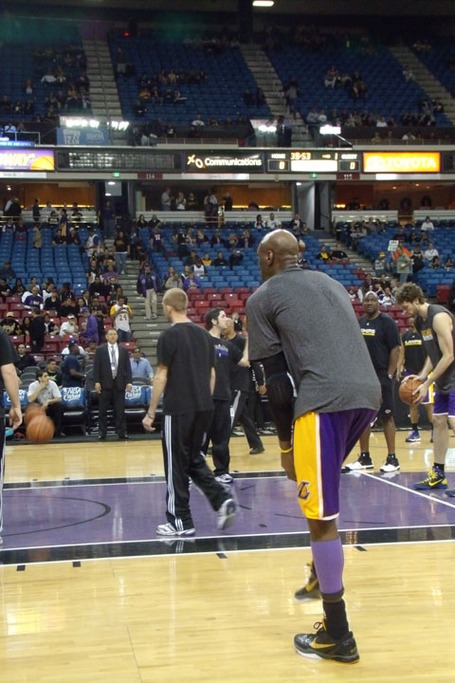 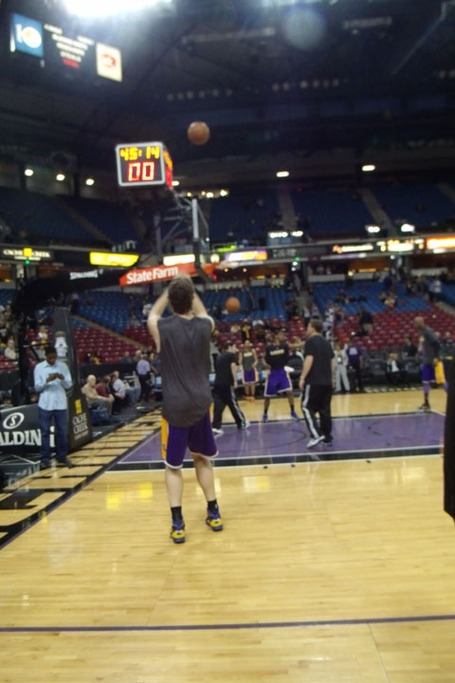 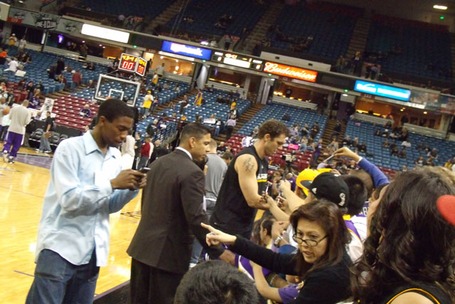 Luke was pretty cool to sign some stuff for the fans. Sadly, I didn't get anything signed this time but I got sweet pics.  That's good enough for me.  By this point, the building was filling up quick (don't let the empty seats in the pics fool you), and there was a massive crowd of people behind me. Lots of police and security. More than usual. I suppose it was precautionary, with it being the last game of the Season and all.  Anyways, we were told to leave and go to our seats. Here are some pictures from my view: 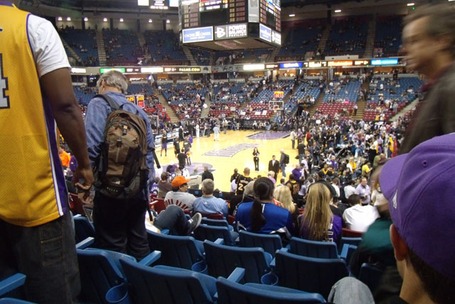 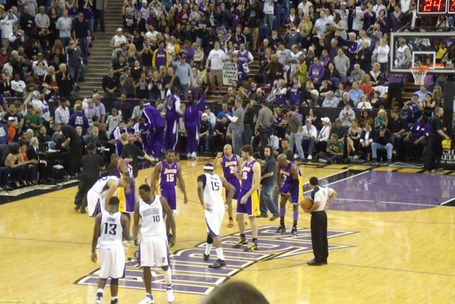 Finally, it was Game Time!!  As usual, Kings played us well in the 1st Q, as the fans energized the team to a good start.  Here are some in-game shots. They aren't as crisp and sweet as previous pics, but they'll do just fine: 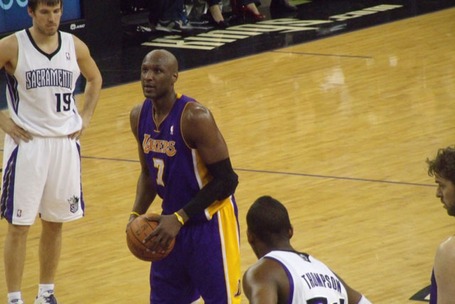 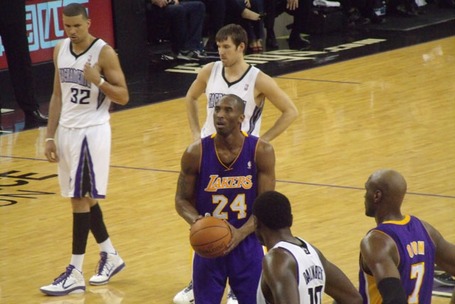 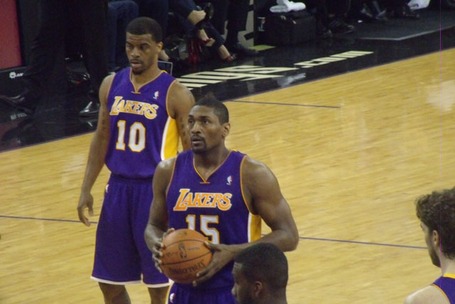 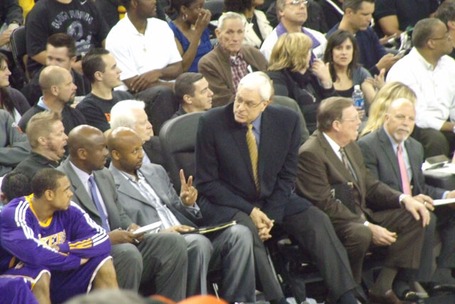 The ShawFather pictured here.  Lamar, Kobe and Ron at the line.  Great game by Kobe.  As a whole, the Lakers did well on their freebies last night.  Here is Shannon Brown chewing gum (I'm pretty sure he turned the ball over right after I took the pic, lulz) and MVP 2016. 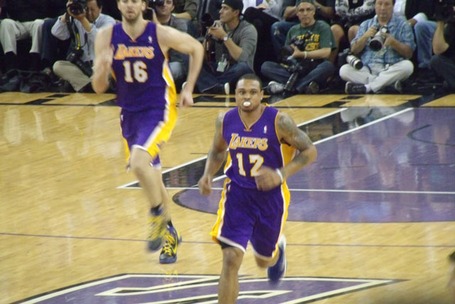 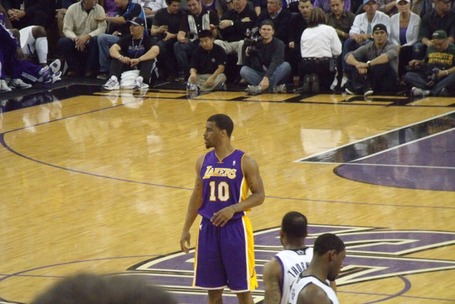 Now, back to that 18-point lead.  When the Lakers were up heading into the 4th Q, the crowd wasn't as silent as I would have thought.  Usually by now, they start to leave or the Lakers fans start to out-cheer them.  But no, Sacramento Kings fans would have none of that and instead were loud and proud. Great stuff from them.  After all, it was the crowd that literally carried the team in the 29-11 4th Q.  Every shot Tyreke, Marcus, Thompson or Garcia took felt like it was going in.  Every basket that brought the team closer to the Lakers, would make the building rock.  The ground was shaking at my feet, and I would normally add a joke here about the need for a new arena, but the place was bangin'.  I can't even begin to wonder what it felt like on the court, how it feels to be playing in front of the crowd.

But Kobe. The Black Mamba. Love him or hate him.  He. Buried. That. Shot.  And in many ways, that was the only way this game should have gone, with a Kobe 3 to send it into OT. 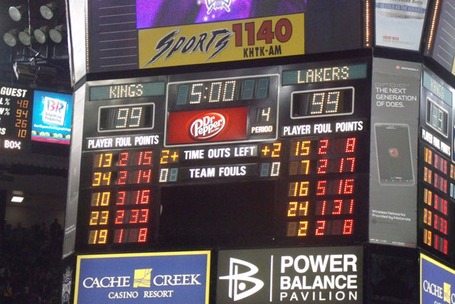 You know how OT played out, so I won't bore you with that. Here are the end game pictures and final commentary: 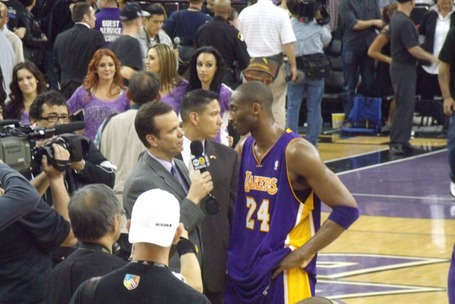 John Ireland: "Kobe I'm glad you won us the game, because I said I would walk to Sacramento from L.A!" 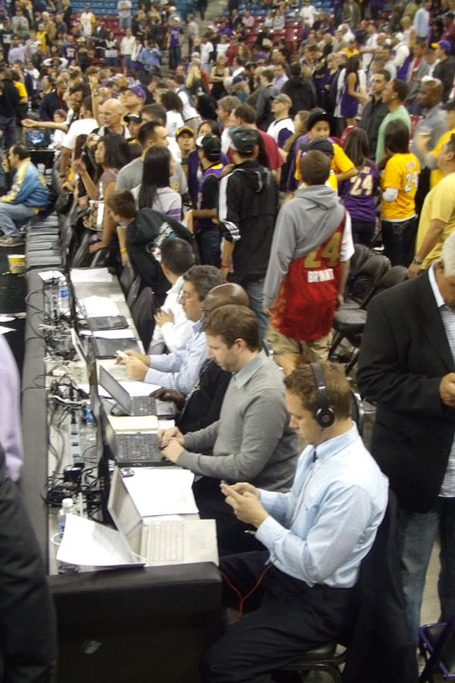 End game panorama.  This was about 10 or so minutes after the game ended.  Lakers pundits were wrapping up and heading to the locker rooms.  Lots of fans stayed, and a "Here We Stay" chant began.  These Kings fans, really love their team.  I can't imagine having my team taken away from me, and to see the reaction of these supporters was amazing. I'm rooting for the Kings to stay, I don't want this fanbase to lose something so dear and close to their hearts.  These fans deserve something much better than this, they deserve a team and a new gym.  We can only wait and see how things play out. 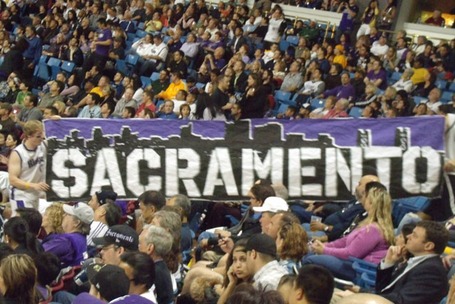 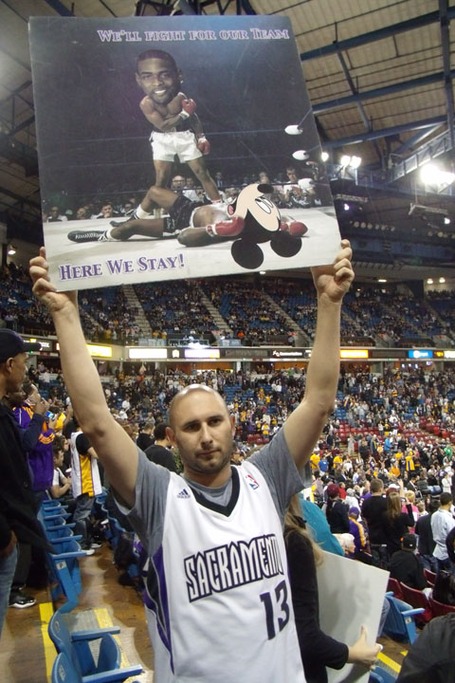 This guy was cool.  He was pumped for the game.  Great sign too, but I forgot to ask if he was from StR. Great stuff man, if you're reading.  Well, that's about it.  I'm thankful for having the opportunity to attend this game.  I have some videos uploaded, but this post is already longer than I thought, so I'll just link them and make it easier on your browsers.