Share All sharing options for: No good comes from analyzing Kobe Bryant's assists

I wasn't particularly happy with Kobe Bryant's game in yesterday's victory over the Minnesota Timberwolves, 90-79.  My criticisms of the Mamba would fall right in line with the usual talking points ... not doing a great job of involving teammates, taking shots that were more difficult than they needed to be, lazy defense against the one player on the other team who was playing really well, all the normal stuff.  But his line on the night was hardly terrible.  24 points on 18 shots with 45% shooting, 4 rebounds, 3 assists and 3 turnovers.  As Kobe goes, it's a decidedly "meh" stat line, but also nowhere near disastrous.  His slow shooting performance gradually improved in the 2nd half, but overall, it was not one of his best efforts.

Instinct tells me that this was a game in which Kobe Bryant very well could have hurt his team's offensive performance, but the stats don't really bear that out.  After all, 18 shot attempts is less than his season average, he shot a decent percentage for a perimeter player, and his assist total (3) is on the low end of average for him, not great, but also well within the margin of expectation for a guy who averages roughly 5 assists per game.  However, if we remove Kobe from the equation, or more appropriately, overlook him, we know the overall offensive performance was terrible, and I think Kobe deserves a lion's share of the blame for it.  For all the times we've seen stats used to paint Kobe in an overly negative light, here is the rare counter.  Kobe's stats weren't too bad, and yet I'm making the argument that his play was that bad.

The whole thing got me thinking about how we measure Kobe's performance statistically in the first place.  For years, people have used Kobe's relatively low assist totals compared to his peers as a measuring stick for how selfish he is and how he sometimes hurts his team offensively by failing to utilize his teammates.  Laker Nation counters with talk of how the Triangle limits a player's assists by involving the entire team within the offense.  But has anybody actually looked at whether Kobe's assists have anything to do with his team's success?  Well, I did.  And near as I can tell, you can tell absolutely nothing about the Lakers offensive performance, or overall success, by looking at how many assists Kobe Bryant gets in a game.

The Los Angeles Lakers have now played 62 games this season.  Kobe Bryant has averaged 4.9 assists/game so far.  He has been above that average (5 assists or more) exactly 1/2 the time, 31 times on the season, which means 31 times he has been below the average (4 assists or less).  Meanwhile, the Lakers have an average Offensive Rating (Note: Offensive Rating, or OR, and Points per Possession, or PPP, are used interchangeably in this piece; OR is simply PPP multiplied by 100) of 111.7.  They have performed above that average 34 times and below it 28 times.  If you compare the two categories, you can quickly determine that there seems to be little to no relationship between the two.  Here's a scatter graph that shows the relationship, or lack thereof. 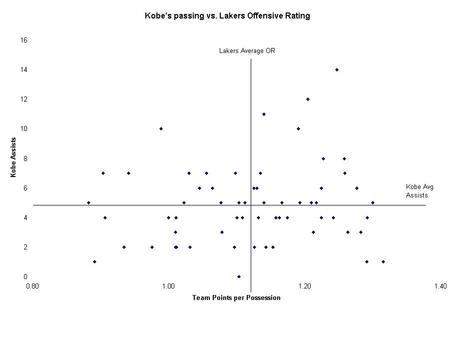 The two lines are Kobe's assists per game average, and the Lakers average offensive rating on the season, separating the graph into 4 quadrants.  As you can see, the distribution is quite balanced.  Of the 31 times Kobe has had a low assist total, his team has been above their average PPP 16 times and below their average PPP 15 times.  When Kobe has a high assist total, the team comes in below their average 13 times, and above the average 18 times.  So, we can see that a high assist total has marginally improved offensive performance, while a low assist total makes no difference at all.  But look at what happens when we attach the team's overall record to the data points in each quadrant.  Looking at this another way, here is a segmented table of the relationship between Kobe's assists and the Lakers average PPP.

So, when Kobe has 8 or more assists, the team seems to have significantly higher offensive performance, but there is hardly any difference in the offensive performance of the team when he has few assists vs when he has an average number of assists.  Furthermore, the sample size of that 8+ assist category is considerably less than the other two categories, and thus less reliable, something which I will illustrate even further in a bit.

OK, so we know that the Lakers perform more or less the same offensively whether or not Kobe is racking up the assists.  But what about the argument that the team just doesn't perform as well overall when Kobe is dominating the ball?  By virtue of the fact that Kobe is one of the more skilled, talented players in the history of the game, its clear that he can lead the team to a strong offensive performance even if he isn't involving his teammates as much as he should, but will the team be as locked in defensively, or perform well when needed in big moments later in the game?  To find out, let's attach records to the data points in each overall quadrant.

From this table, we can see that whether the Lakers play well on offense or not is massively important to determining their overall success.  They are 31-3 when scoring better than 1.117 PPP on the season, and 12-16 when they fail to do so.  We can also see that Kobe's ability to garner assists has absolutely no bearing on wins and losses.  In games in which the Lakers don't score well, the team is 6-9 when Kobe doesn't have very many assists, and 6-7 when he does have a large number of assists.  When the team does do well offensively, they are 15-3 when Kobe has a lot of assists, and 16-0 when he doesn't.  That last bit is pretty shocking ... The Lakers have 16 wins and zero losses in games in which they score well despite getting very few assists from Kobe Bryant.  Insomuch as we can trust these data sets which, due to relatively small sample size and random definition of low vs. high assist totals, are certainly not flawless, this point absolutely destroys the concept that the Laker team needs Kobe to get assists in order for them to perform strongly.

But we've already seen that the more assists Kobe gets, the higher the PPP, right?  The Lakers' PPP shoots up when Kobe has 8 or more assists, remember?  Well here is where shit gets weird.  Let's attach the team's record to that previous table.

The fact that there are only 7 games this season in which Kobe has 8 assists or more means we shouldn't take too much away from this relationship, but how strange is that?  Keep in mind, the Lakers have only lost three games all season in which they performed above their offensive season average, and two of those games were games in which Kobe tallied double digit assists.  Could it be possible that a high assist total for Kobe is just as indicative (or even ... gasp ... more indicative) of a problem with the offense than a low assist total is?  Probably not.  It's probably just a fluke caused by a small sample size.  However, the numbers do indicate that Kobe's assist totals have little to no bearing on the team's overall performance.

Ironically, the message behind this whole argument is one that is perfectly valid, at least in my opinion.  I do think it is a bad thing when the offense runs entirely through Kobe.  I do think the team's performance often suffers, both offensively and defensively, in games in which Kobe takes over.  I think there is sometimes a combination of relaxation and resignation in Kobe's teammates when they see that look in his eye.  I strongly believe the Lakers are at their best when Kobe is but one very talented cog in the very talented engine that is the Lakers offense, and there are times, even today, when he fails to recognize the importance of that relationship.  The Lakers need Kobe to be a willing passer in order for the offense to run smoothly.  For Kobe to dominate the ball in the Laker offense more than a couple minutes at a time is a bad thing.

If the argument is valid, the only conclusion we can reach is that the method for analyzing the argument is not.  Assists are the problem.  Specifically, Kobe's individual assist totals pretty clearly tell us nothing about his team's offensive performance, nor does it tell us anything about the team's overall performance.  Since we can all observe that Kobe's willingness to be a part of the offensive system is important, we can therefore deduce that assists do not measure that willingness in any meaningful way.