What Combination of Laker Bigs Works Best Against the Thunder?

Share All sharing options for: What Combination of Laker Bigs Works Best Against the Thunder?

Today's big game against the Oklahoma City Thunder is filled with interesting matchups. There is the league leader in points per game, Kevin Durant, against one of the better on-ball defenders in Ron Artest. There is also the league leader in points per minute, Kobe Bryant, against another one of the better defenders in the league, Thabo Sefolosha. There is the interesting cross-match of Kobe Bryant trying to defend the younger and significantly more athletic Russell Westbrook. Despite all of these high profile matchups, none may have a bigger impact than that of the Lakers' lineup featuring Lamar Odom and Pau Gasol.

It is not often that one can identify any significant trends looking at the results of various line-up combinations between teams, the reason being that there are very few games to analyze, with only two to four games between teams per year.  One could gather additional data by looking at prior seasons but oftentimes the rosters change drastically, making comparisons somewhat useless. Lakers-Thunder games, however, don't have these problems. The Lakers and Thunder have had very few roster changes, although the Jeff Green for Kendrick Perkins one is a doozy. They also played each other in the playoffs last year and that series went six games. This gives us a unique opportunity to compare lineups across 11 games over the last two seasons (four last season, six in the playoffs and the one game played this year). An analysis of those 11 games yields some interesting results.

During those 11 games, the Lakers played lineups featuring Derek Fisher, Kobe, Artest and some combination of Odom, Gasol and/or Andrew Bynum at the other two positions for 300 minutes.  Here are the offensive and defensive efficiency statistics for each of the three combinations. 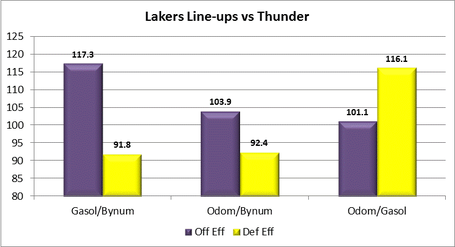 The reason for this is quite easy to explain: the Odom and Gasol front line simply doesn't present the size mismatch the other two lineups do. Nothing shows this more than taking a look at the rebounding rates for each of these three combinations. 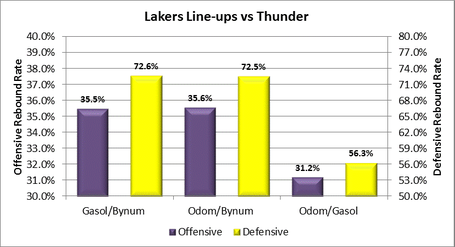 As you can see, the frontline combination of Odom and Gasol has been quite poor on the defensive glass, grabbing only 56.3% of the Thunder's missed shots. This is a significant drop relative to the other two combinations and is a big reason why the defensive efficiency is so poor. They are doing well to force the initial stop, but failure to end the possession there is killing the team. They also have not grabbed as many of their own misses on the offensive glass.  The Thunder have dominated them on the glass with this lineup and thus significantly outscored the Lakers when this lineup was on the floor.

The Lakers have won 8 of the last 11 games against the Thunder due to their supreme size and rebounding inside.   So while the sexy matchups feature stars like Bryant, Durant and Westbrook, the real matchups to watch will be when Odom and Gasol are out there together. They haven't done well in the prior 11 games but Odom is playing the best he has as a Laker this year and Gasol is channelling his inner Black Swan. Will it be enough to turn the tables? We will soon find out.