Share All sharing options for: Hola From All-Star Weekend

Even as I type, the great and good of the pro basketball industry are descending on Los Angeles for the combination carnival/trade convention known as All-Star Weekend. On the schedule, among other attractions big and small, are the Rookie-Sophomore Game, the dunk contest, the three-point competition, an actual All-Star Game and presumably numerous parties to which I've not been invited. I'm pleased (and perplexed) to report that someone in the league office has decided to issue me a media credential for the whole three-day jamberoo. Frankly, I don't need to tell you what a bad idea this is. But I'll be there behind the scenes as this all goes down, I'll be reporting on it both here and at SBN Los Angeles, and if I'm lucky I'll get through the experience without exposing either myself or the league to undue embarrassment or financial liability.

This afternoon I wandered downtown to check out the pre-festivities. There were two things happening: the unveiling of the new Jerry West statue outside of Staples Center and the kick-off of the NBA All-Star Jam Session. The statue thing was scheduled to happen at 5:00, and as I wandered up Figueroa toward Star Plaza, I had my first random encounter with an eminence from the hoops world. And who was it but none other than Commissioner David Stern. No joke. He and his posse - which comprises half a dozen dudes in khakis and blue blazers - just happened to be cruising past as I was getting my bearings. Stern asked if he could have a picture with me, but I was in a hurry so I told him maybe next time.

The Jerry West statue itself looks really cool, but if you weren't at the ceremony in person, don't think you missed that much. Granted, it's fun when you turn around and see Bill Russell kicking it a few feet away. I also saw Stephen A. Smith in hobo sweatpants that he might well have been wearing since Monday. But there weren't especially good sightlines to the stage where Magic Johnson, Pat Riley, Jerry Buss and others gave speeches about West, and because the sound was being mixed for TV you couldn't hear it all that well in person. And then when the sun went down it became really cold, so I did what any seasoned professional would do in those circumstances: I left.

Here are a few photographic highlights from the event. As you're about to find out, the only thing I do worse than journalism is take pictures. Anyway, here's Kurt Rambis and his bald spot.

Here's Pau Gasol arriving late. You know what they say about Spaniards and punctuality! (Actually I have no idea what they say.) 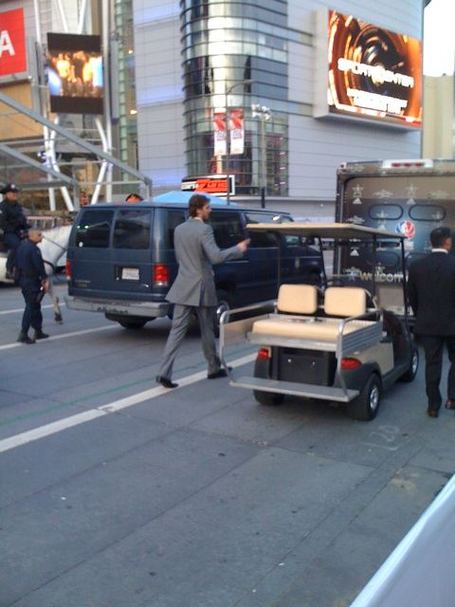 Some dude made this and brought it to the event. 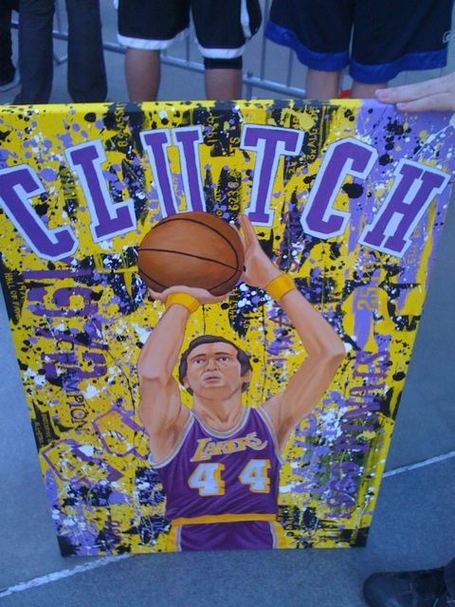 Stern at the mic.

After deciding that the weather was too cold for a precious flower like myself, I rolled into the Jam Session, which takes place in this massive room at the L.A. Convention Center. Geez, how to describe the Jam Session? It's like a makeshift, basketball-themed amusement park with an overwhelming amount of noise and advertisement. When you walk in, you come down a runway lined with volunteers banging thunder sticks.

Those who survive can avail themselves of dozens of different participatory installation pieces. For instance, have you ever wondered how your hand size compares to Pau Gasol's? Who among us hasn't??

You can have your picture taken with cardboard simulacra of the Lakers.

Or in the "Lakers' locker room."

You can try dunking on baskets of various heights. I asked if they could raise one up to 12 feet for me, but they said no because I'd probably shatter the backboard.

You get the idea. Even though it's totally goofy, the Jam Session is a pretty good time. The lines weren't that long tonight, so if you wanted to run through all the games, you could easily manage it. The experience is a bit cacophonous, as each stall has some dude with a microphone exhorting participants to reach their full potential at, like, the bounce-pass drill or whatever. But if I were a kid I'd completely love this shit, and if you're an adult... well, they sell beer. If I return to Jam Session at some point this weekend, I'll probably shotgun four Bud Lights and then see what dunks I can whip up on the seven-feet hoop.

Tomorrow there are open practices for the rookies and sophomores, some press conferences, a celebrity game and a few events with opaque titles like "T-Mobile Youth Jam" and "NBA D League Dream Factory presented by Haier." I'll be poking my nose wherever I can, so if you happen to be around and you see some dude who looks like my avatar, feel free to come up and say hello. It might be me, it might not. But even if it's not, maybe you'll make a new friend, and a handsome one at that!