In theory, there are ways this could've been more embarrassing. The Lakers could've lost this badly, say, in Cleveland instead of Charlotte. Kwame Brown could've celebrated the Bobcats' 20-point win by throwing a birthday cake in Luke Walton's grill. Or the Lakers could've all forgotten to wear shorts and been forced to stand at center court while the Bobcats' cheerleaders pointed and laughed. Barring these scenarios, though, tonight really could not have unfolded any more disastrously for the Lakers, who got their skulls caved in by Charlotte, 89 to 109. Just like that, we have a promising new candidate for Worst Loss of the Season.

We knew the Lakers were going to be dragging a bit in this one. They've been on the road for a while now, they played just yesterday in Orlando, and Kobe Bryant was ill this afternoon with flu symptoms. But none of this excuses what they did tonight, which is quit. They fell behind by a little in the second quarter, then by more in the third, and when it became apparent that things weren't going their way, they clocked out. They gave up any pretense of competing or defending and invited the Bobcats to run a 12-minute layup drill in the fourth. It goes into the books as just one loss, the same as any other, but anyone who watched the second half understands that it was different. This was straight up surrender.

And to think, I stood up your mom on Valentine's Day to watch this nonsense. How will I ever learn to love again?

The Bobcats, lest we forget, are not a talented or successful team. Their record is deeply under 0.500 and their starting front line includes both Kwame and Boris Diaw. Their starting point guard, D.J. Augustin, was playing with a wrist injury tonight. It's true that any road back-to-back is a challenge in the NBA, but under no circumstances should this Charlotte squad be blowing out the Lakers. It's not possible under the laws of science for the Bobcats to beat the champs by 20 points unless the latter decide they can't be troubled to compete like professionals.

Early on, things didn't look completely dire. With 2:47 left in the first period, the Lakers led by a deuce. What initially turned events in the Cats' favor was the play of the squads' respective benches. Phil Jackson went with his second unit late in the first period, which is earlier than usual, and kept them on the floor for about the first four minutes of the second. In that stretch the Lakers were outscored 15 to 6, as Steve Blake got worked over by Shaun Livingston and the Laker offense succumbed to turnover problems.

When the starters reentered the game, Kobe tried to ignite the attack but didn't have the magic. The Lakers went scoreless over a span of five possessions in which Kobe missed three shots and committed a turnover. The Charlotte lead stretched to 11, and even though the Lakers clawed back to within six at the break, you could see their issues starting to fester: sloppiness and poor outside shooting (no way!) on offense, and acute lethargy on D.

At the beginning of the third, Gerald Wallace made four straight buckets for the Cats while Kobe continued to press the issue, with poor results. Charlotte, sensing the Lakers' vulnerability, began to attack in transition. Soon the floodgates opened up. Badly executed Laker possessions on one end led to fast-break opportunities at the other, which the Cats smoothly converted into layups and open threes. Kwame started to hit jumpers over a flat-footed Pau Gasol, and when Wallace hit a 26-footer at the third quarter buzzer, the loss was all but official.

Nothing the Lakers could've done in the fourth period was going to change the outcome. But the way they went about losing was disgraceful. The moment the game was decided, they shut down and let themselves be humiliated. The Bobcats went into And1 Mixtape mode, unloading dunks and threes at will. And for them. The way the Lakers decided to fold up shop, they deserved every once of punishment heaped on them. After the game, Phil had only this to say:

We're very upset about our performance tonight. We're embarrassed about what we did. That's it.

As well they should be embarrassed. The Cats, one of the worst offensive teams in the NBA, came in averaging 1.03 points per possession but tonight put up 1.24 points per trip. That puts this game on the shortlist for the Lakers' lamest defensive outings of the year. And the offense wasn't much better. As a team the Lakers made just three of 19 three-point attempts. Over the past two games they've honked 30 of 35 from downtown. I know we keep writing this, but unfortunately it's true: this team isn't going to win if someone can't hit a three. Nobody's exempt from this criticism. There isn't one dependable outside option on the roster right now.

Sorry that I'm breathing a lot of fire here. This one leaves a bad, bad taste in my mouth. A moment of levity did occur in the third quarter, when this actually appeared on the screen during the KCAL telecast. 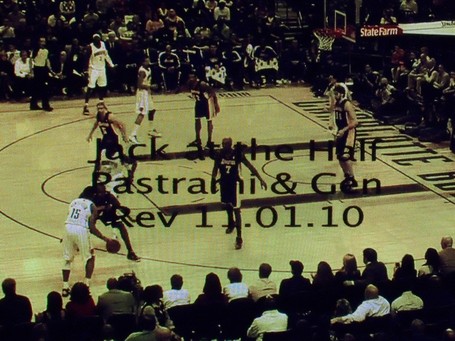 See, folks? This is the kind of high-tech wizardry we'll miss out on once the professionals at Time Warner take over.

One game left until the All-Star break. Vent away.