Lakers-Knicks Tickets Can Apparently Be Had For Cheap

Share All sharing options for: Lakers-Knicks Tickets Can Apparently Be Had For Cheap

One of the major drawbacks of rooting for the league's best franchise, playing in a major metropolis, is that trying to find tickets to a Los Angeles Lakers game usually requires a substantial part of your nest egg. But, with 2 preseason losses and 2 regular season losses to get things kicked off this year, the market rate for Lakers tickets is apparently in sharp decline.

Courtesy of our bros over at TiqIQ, we're providing you the opportunity to get in on the action. These dudes are going straight Priceline on your Lakers experience, daring you to make an offer they can't refuse. To the copy!!

'Melo and Co come to Staples to take on Kobe tomorrow night. For this heavyweight match up, our ticket partner TiqIQ has a special deal for Lakers fans, courtesy of ScoreBig.com, where fans can "make an offer" on the price they want to pay: For example, a "2 star" ticket (as described by ScoreBig.com) that would typically sell for $110 (after shipping + handling fees) can be had for an offer of $80 all-in (with no additional costs for shipping or handling). Meanwhile, a "3 star" ticket that usually retails for $250 after fees can be purchased for an offer of $125 via this promotion. But Lakers fans need to move fast, as this deal expires at 7pm Pacific TODAY! To make an offer on this deal, click here: http://tiqiq.us/6EU

After the jump, the whole idea in picture form ... 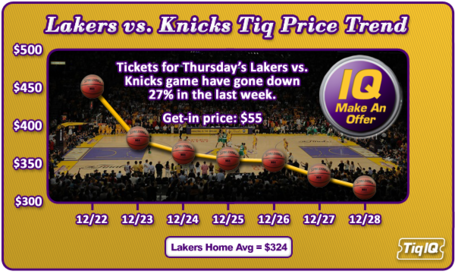