This Week In The Lockout: Pizza Wars

Share All sharing options for: This Week In The Lockout: Pizza Wars

One of the cruelties of the NBA lockout is that fans can never really get their hopes up. I mean, you can, but you run the risk of looking and feeling like a huge chump. When the owners and the players' union reach an agreement, it'll happen fast, with resolution of all major issues snapping into place in quick sequence. The two Venn diagrams representing what each side will accept will continue not to overlap until suddenly they will. But you won't necessarily see that moment coming. Just think of how many "critical" meetings there have been already that tantalized with the possibility of a deal, only to end with Ken Berger tweeting about how far apart the sides remain.

The next few days will be especially fraught. After the parties failed to reach a compromise in meetings held on Monday and Tuesday, Stern canceled the preseason games he hadn't canceled already and announced that the first two weeks of the regular season would get cut if there were no deal by next Monday, October 10. No in-person meetings are scheduled for today or the weekend, but the two sides are in touch and could reassemble on short notice. There are reasons to believe a compromise is within reach, and there are reasons to think it's not. Want to start thinking ahead to training camp (Fat Lamar Odom!), free agency (Marco Belinelli!) and preseason trades (Fat Lamar for Iguodala)? Be my guest, and I hope your optimism is vindicated. Me, I'm keeping my guard up. That's just how I am. Why oh why must I build these walls around my heart?

Here's where we're at: the talk right now is all about how to divide basketball-related income (BRI). There's still no agreement on the so-called "system issues" (code for salary-cap exceptions, player contract lengths and the duration of the new collective bargaining agreement) and the players haven't yet signed off on the owners' proposed revenue-sharing plan, but the prevailing assumption is that once the BRI split is resolved, everything else is small beer. The cap is likely to be harder than it was under the old CBA while retaining key exceptions. The revenue-sharing system will sweep more dollars from the Lakers and Knicks to the Raptors and Kings. But it's all BRI-driven. The owners can live with a softer cap if they get a nice, big slice of the revenue pizza. The players will give more on cap issues if they get the big slice.

To give you a sense of the pizza-dollars at stake: BRI is about $4 billion a season, so each percentage point of BRI is worth $40 million. At any given time there are around 430 players in the NBA, so to the average player, losing a percentage point of BRI in these negotiations means surrendering around 93,000 pretax dollars a year. Sorry for the boring arithmetic, but I find that when talking about dollar amounts this enormous it helps to break everything down to something slightly more relatable.

The meetings this week fell apart because each side was asking for 53 percent of BRI. (In the old CBA, the owners took only 46 percent.) A 53-47 divide is pretty big, right? It is indeed. But in his postmortem press conference, Stern claimed to have offered the players a straight 50-50 split, which he said the players turned down. Reporters spent the next couple of days trying to figure out whether he was telling the truth, and the answer seems to be: kind of but not really. Here's what happened. I think.

On the one hand, this little roundelay gives reason to think the camps aren't too far apart. A six-point BRI gap became a two-point BRI gap. As the week wore on, however, there was growing uncertainty about what the owners and players would actually live with, as opposed to what they might've been willing to discuss theoretically. In a letter to union membership on Wednesday night, Fish and Hunter wrote that their "last formal proposal" was at 53 percent and implied an unwillingness to compromise further. And yesterday, Yahoo's Adrian Wojnarowski reported that the owners "never wanted to go north of 48.5 percent" for the players' share and that Stern found very little support among the owners when he tried to sell them on 50-50.

Long story short, the parties are still a few BRI points apart. If the season's going to start on November 1 as scheduled, one side or the other needs to blink in the next few days. My own guess, which I hope is wrong, is that it's not going to happen. Seems like there's still a sizable contingent of players, including influential guys like Kobe Bryant and Kevin Garnett, who feel they've already given up enough in this fight. And there are plenty of owners willing to sacrifice games with the hope of getting everything they want or close to it once players start missing checks. Stay tuned. As always, if any big news breaks over the weekend, we'll let you know.

And now what you've all been waiting for: CATS. And what the hell, a phone-answering dog. 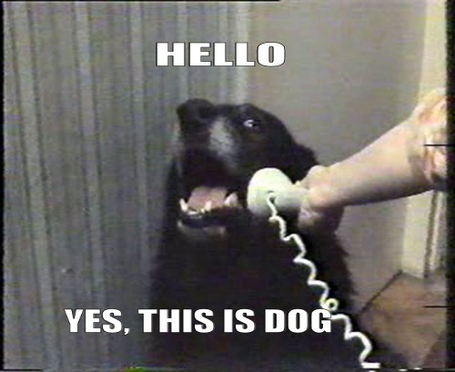