I don't watch that many Pistons games. In part this is because I'm a busy and important captain of industry. It's also because I'm not a masochistic person riven through with self-hatred. So given my limited exposure to this team, I'll just go ahead and assume they're not as awful every night out as they were this evening at Staples Center, where the Lakers slapped them silly, 108 to 83. At this point we're all conscious not to read overmuch into one night's good work, but there's no denying that the Pistons' lie-down-and-play-dead approach to the game is just what the Lakers needed to begin recovering from the past few weeks.

The champs showed pretty solid form on both ends in this one. On offense they scored 1.23 points per possession, their best mark in about a month. They committed just six turnovers, tying their season low, and flashed good diversity in their attack. Most of the damage they inflicted came close to the basket, which is precisely what we want to see, but they were also productive in transition and even - what's this now? - made a few threes. On defense the Lakers had no trouble frustrating the Pistons, who played last night in Utah and clearly didn't have much left to offer.

What I enjoyed most about tonight's win is that it had a little something for everyone. Have you found yourself increasingly dissatisfied with deadweight starters Derek Fisher and Ron Artest? They combined for 15 points and both played strong D, especially Fish in his matchup with Ben Gordon. Have you been aching to see the old Pau Gasol again? He came alive to the tune of a game-high 21 points and seven boards, looking brisk and creative in his offensive moves. Pau, too, was an important presence on the defensive end, as he used his enviable wingspan to shrink the Pistons' passing lanes. Or maybe you feel that Kobe Bryant has been killing the Lakers, in which case I direct your attention to his balanced stat line of 17 points, eight assists, seven rebounds and just a single turnover, reflecting his worthwhile contributions to the winning effort despite subpar accuracy from the field and stripe.

This was that rare occasion when all of the Laker bigs played well. Andrew Bynum was the first to make his influence felt on the game. More and more, he's resembling the huge-but-nimble inside monster that just about every team in the league has difficulty containing. He scored eight points in the first six minutes of the contest, and though his minutes were limited because of early foul trouble, that's just as well given the trip to Phoenix tonight to play the Suns tomorrow. Drew made all six of his field-goal attempts and made a couple noooice dishes to cutting teammates.

Scoring opportunities shifted to Pau once Bynum went to the bench, and by halftime the large European had 13 points and six boards. Lamar had some lovely scores in the second period off two-man sets with Kobe Bryant and then padded his numbers in fourth-quarter garbage time. The decisive stretch, though, was in the third, when the starters operated as a potent, cohesive unit to blow a close game wide open. Ron, Fish, Kobe, Pau and Drew took turns feeding each other for open looks. A 27 to 12 run pushed the lead up to 18 with 3:08 left in the third, and what was left of the Pistons' will to resist crumbled.

A couple notable milestones were reached tonight. First, Kobe passed the great Dominique Wilkins to become 10th on the NBA's all-time scoring table. Second, Luke Walton earned his 10th career technical foul for shit-talking Dajuan Summers after a made three. Tom Hanks, sitting courtside, found this to be a wryly humorous scenario, even if in this particular photo he just looks like he has a poopy diaper. 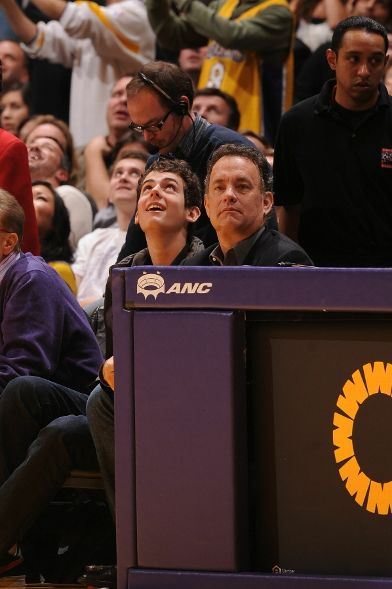 As mentioned, tomorrow night the Lakers play the Suns, and if you think you have any idea how they'll perform, stop being such a dirty liar! Twenty-four hours from now we could be warming to the opening notes of a winning streak, or we could find ourselves right back in fratricidal, "Kobe's shooting too much / Pau's terrible / Why is Derek Fisher still employed?" mode. So let's enjoy this one before events on the court have a chance to bring us all down again.

Follow Dex on Twitter @dexterfishmore. And if you are reading this and you are Tom Hanks, please do not have Dex killed.