Share All sharing options for: Did you know...?: Ron Artest

Ron Artest: strange, mercurial, quirky, crazy, funny, verbose, eccentric, odd, peculiar, weird, all words used to describe the Lakers small forward, now in his second year with the team. Notice the words that are missing: regular, consistent, normal, ordinary, sound, sane. But none of this really matters. Ron Artest is an unusual man, one who makes people around him smile uncontrollably. They can't help but be happy because he never seems unhappy, never down, no matter what's going on. Ron Artest is lovable and the ultimate upper.

More after the jump... 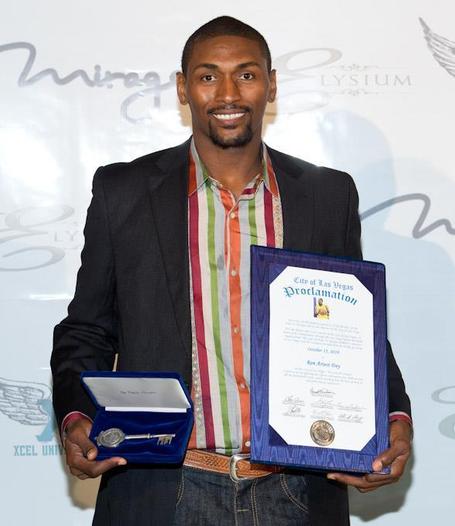 In the summer of 2009, most people were hopeful that the Lakers would re-sign Lamar Odom and Trevor Ariza. In fact, Ariza was the breakout star of the 2009 playoffs and Finals with his timely 3-point shots and amazing steals of inbounds passes. So the surprise when Trevor signed with Houston was fandom-wide. But nothing was more surprising than the immediate signing of Ron Artest, the guy who had just helped the Houston Rockets take the Lakers to seven games in the second round of the 2009 Playoffs, and battled with Kobe along the way.

What?! The Lakers are taking Ron Artest?! Holy shit, you've gotta be kidding me! My childhood is disappearing before my very eyes, with Ed McMahon, Farrah Fawcett and Michael Jackson all dying over a two-day span. And before I can get over my grief and wipe away my tears with limited edition sequined glove #37, I get word that we signed Ron "Tru Warier" Artest?! There is no way he's gonna fit with this team, in that locker room. He's crazy, he doesn't want to play, he wanted to work at Circuit City to get the employee discount, he wanted to take time off during the season so he could promote his rap album, he was charged with domestic violence against his wife and spent 10 days in jail. This dude is nuts!

Fast-forward to June 2010. Ron Artest was critical to the Championship run of the 2009-10 Lakers. They couldn't have done it without him. 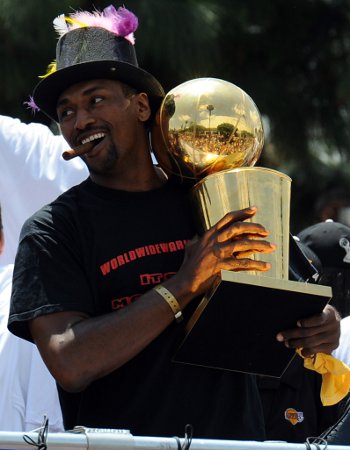 So, what do you know about Ron-Ron?

Note: all information above was found on Wikipedia and NBA.com