The curious case of the Lakers 3 point defense

Share All sharing options for: The curious case of the Lakers 3 point defense

In the midst of watching the Los Angeles Lakers get carpet bombed on their way to another loss, this time at the hands of the Dallas Mavericks, I was troubled by a single recurring thought ... How in the hell are the Los Angeles Lakers good at 3 point defense?  All too often, they play like they did last night ... late close outs, poor rotations, needless doubling of non threatening post players; these are staples of the Laker defense on any given night.  And yet, year after championship winning year, the Lakers are amongst the leaders in opposing 3 point field goal percentage.  They were third two seasons ago, first last season and currently rank fifth this season, despite last night's air raid.

Not only does this not make sense from a theoretical standpoint (because the Lakers don't seem like they defend the three point line very effectively), it also doesn't sit well with my vague recollection of the season to date.  It seems to me like the Lakers' opponents shoot well from three point range a lot.  Besides last night's loss, other losses to Phoenix, Memphis, Milwaukee, Chicago, Houston and the Clippers all spring to mind as events in which the opposing team killed L.A. from downtown, and that's just off the top of my head.  So I dug a little deeper, and unearthed some strange stuff.

When it comes to defending the 3 point line, the Lakers are truly feast or famine.

The Atlanta Hawks lead the association in allowing only 31.7% of opposing 3 pointers to fall.  The Miami Heat are second, allowing 32.1%.  Based on these numbers, I think it's fair to say that 32% is a pretty solid benchmark for establishing "awesome" 3 point defense.  In 44 games, the Lakers have held their opponent to at or below 32% 22 times.  In other words, half the time, the Lakers defend the three point line (statistically at least) as good or better than the best teams in the league on average.  Not bad, Lakers.

On the opposite end of the spectrum, the Cleveland Cavaliers have been historically bad this season, with opponents making 43% of their 3 point attempts against LeBron's former crew.  They are joined in the bottom five by San Antonio (39.2%, who saw that coming?), the Clippers (38.6%), the Twolves (38.5%), and the Wizards and Thunder (tied at 37.5%), so another fair benchmark for "bad" 3 point defense can be set at 37.5%, no?  In 44 games, the Lakers have allowed their opponent to be at or above 37.5% 21 times.  In other words, half the time (minus 1), the Lakers defend the three point line (statistically at least) as bad or worse than 83% of the league on average.  Better fix that, Lakers.

If you're observant, you'll have already noticed something very strange about these data sets ... there is nothing in between.  The Lakers have a grand total of one game in 44 attempts in which they've allowed their opponent an "average" shooting night from distance.  50% of the time, the Lakers 3 point defense resembles a league leader, and 50% of the time it resembles a league doormat, and there is no in between.  Anybody worth their statistical salt will tell you that's some strange shit.  Check out these charts (click to enlarge) showing the progression of 3 pt % comparing the Lakers with the three teams ahead of them. 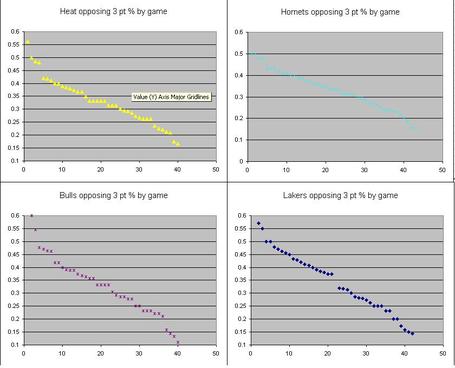 As you can see, there is a very noticeable gap between good defensive performances and bad defensive performances which does not exist for any other team.  To be fair, I "doctored" the Lakers data set to remove the one game in which the Lakers allowed an "average" shooting night from their opponent to emphasize the gap, but none of the other team graphs have any single data point that is that influential in creating the graph's progression.  All the other teams have the basic linear progression you would expect, with some outliers at either end of the line.  The Lakers also have a linear progression, but that progression is split in two quite distinctly.  That this split happens right in the middle is what makes it so strange.  If these stats were students in a class, all the other teams would have a traditional bell curve, but the Lakers' "class" would be made mostly out of A's and F's.

How can we explain this statistical anomaly?  I have no clue.  The most obvious guess would be to look at a team's overall ability to shoot the three, but no relationship between the two exists.  Strong shooting teams like Phoenix and Denver have killed the Lakers from 3 pt range, but many of the teams which have bombed away against the Lakers are among the poorest shooting teams in the league (Memphis hasn't shot less than 50% from downtown in any of our three games against them, but they rank 24th overall in league 3 pt shooting).  There is no relationship between home and road games.  Many of the worst 3 point defensive displays come in losses, but that's like defining the relationship between jumping off buildings and breaking your leg ... painfully obvious.

All we are left with are theories.  Here are the most likely in my mind.

This one is basic; If the Lakers actually try to defend the 3 point line, then they are successful at defending the 3 point line.  It's appealing, if only because it correlates with this concept we have of a team that is capable of flipping the switch.  It also passes the eyeball test for games such as last night, in which we all saw a ton of lazy closeouts and wide open 3 point shots for the Mavericks.  I'm not convinced, however.  I'm sure the effort theory has something to do with it, but I don't believe for a second that the Lakers can just snap their fingers and suddenly be that much better at defending the 3 point line.  How many games has Dex written the words "Only a slew of missed open shots allowed the Lakers to win/keep it close" over the past few weeks?  I highly doubt every "strong" Lakers defensive performance of the 3 point line corresponds to a game in which they've played hard, though I will say that the Lakers are more likely (based on the stats) to give up a high 3 point % against a team with a bad record than against one with a good record.

The Lakers are the defending champs, and as such, they have an aura about them.  Depending on the team (and more specifically, each individual player playing for the team), this either manifests itself by intimidating the opposing player, or causing them to get amped up for a shot at the champs.  Either scenario creates a situation whereby the opposing player is more likely to miss 3 point shots, either because they lack the confidence, or because they are over-zealous.  This theory needs to be combined with the Lakers' reliance on the theory to explain large discrepancies in performance.  In other words, the Lakers rely on the fact that simply playing against them makes you less likely to drain threes, and when it works, it works great, but when it doesn't, it fails miserably.  There are certain games I can point to (Here's looking at you Cleveland) that definitely fall into this category, but I'd be very surprised if a majority of teams fail to hit threes against the Lakers simply because they can't control their emotions.

Having watched the Lakers so much over the years, I know this theory to be true, though it's bearing on the overall data is not guaranteed.  The Lakers often choose which opposing player they want to leave open for three point shots, and then let that player fire away.  Sometimes it works, and that player fails to burn them despite being left open.  Sometimes it doesn't, and the Lakers get burned repeatedly without being willing or able to compensate.  Basically, Phil Jackson acknowledges that it is impossible to take away all of an offense's options, and instead of taking away 80% of everything, he thinks it is smarter to take away 100% of some things, and essentially play Russian Roulette with whatever is left.  To some extent, all teams do this; defenses will routinely leave a center open outside the 3 point line, because there is no threat of the center nailing the shot even though he is wide open.  But the Lakers will do this even with players considered to be average outside shooters.  They dare a guy to beat them, and that guy either destroys the Lakers' chances, or his own team's.

The most obscure of my suggestions, and most difficult to prove, this is also the theory that I believe plays the biggest role in explaining both the Lakers' overall success defending the three point line, and their tendency to give up huge three point performances in spite of that overall success.  The idea here is that somehow, the Lakers are capable of taking a team completely out of their rhythm, and the opposing team therefore misses 3 point shots they would otherwise expect to make.  Basketball is very much a rhythm sport, which is why it is easier to catch and shoot than it is to catch, pump fake a couple times, and then shoot.  As shot distance increases, so to does rhythm's importance. That is an instance of rhythm on an individual play, but this can also be applied to whole stretches of a basketball game.  Most big runs in basketball are a combination of one team playing in rhythm and the other team playing without.

I believe Phil Jackson to be a master of breaking an opposing team's rhythm.  I think his defensive strategy is more about psychological warfare than it is about trying to avoid certain outcomes.  He talks constantly about creating "flow" for our offense and disrupting flow for the opponent.  One of the best examples of this was the 2006 1st round matchup between the Lakers and the Phoenix Suns.  In that series, the Lakers jumped out to a 3-1 lead by pounding the ball inside (to Kwame friggen Brown, no less) and holding the Suns potent offense to well below their averages in just about all statistical categories.  Specifically, I remember Shawn Marion playing poorly and missing many wide open outside shots through the first 4 games.  His overall numbers from that series, even the first four games, aren't bad, but his outside shooting was well below average.

So what happened in that series?  Phoenix found their stride in obliterating the Lakers in game 5, and never looked back.  I think the same thing is happening to the Lakers in roughly half their games so far this season ... the other team is finding their rhythm, and because the Lakers rely so heavily on breaking that rhythm, failure to do so means the other team will put up a big number from the outside.

In truth, all of these factors are probably contributing to the overall issue in one form or another.  The theories can all be intertwined.  The Lakers probably rely on the intimidation/amped theory to assist them in breaking a team's rhythm.  They fail to disrupt a team's rhythm because they don't play with the requisite effort.  All of these factors are related.  No matter the cause, the divergence with which the Lakers defend the three point line, with equal parts feast and famine, points to the overwhelming trend of this season.  Day in and day out, nobody knows what to expect of this team.