Share All sharing options for: Lakers 100, Nets 88: There Was a Dog at the Game

An old sports adage holds that if you let a bad team hang around long enough, it'll come back to bite you. It's totally true - except, apparently, if the opponent is the New Jersey Nets, in which case you can let them hang around for as long as you want and eventually the clock will just run out. That's more or less how tonight's contest at Staples Center unfolded. The Lakers showed up at the appointed time, played just hard enough to raise their pulses a few BPMs and headed back into the night with a forgettable 100 to 88 victory. What was that score again? I already forgot.

This wasn't what you would call an exciting game, unless you were really bad at English and didn't understand what those words mean. It was slow in tempo and lacked dramatic runs. The Lakers built up a nine-point margin in the second period, and from there we watched with rapt attention as the lead fluctuated thrillingly between four and eight until the very end, when it exploded all the way up to 12. The Nets are so bad, the champs would've had to go out of their way not to win. Had the Lakers somehow dropped this one, I assume the California Attorney General's office would've immediately announced an investigation into possible point-shaving.

The evening did, however, begin with a nice little moment, when Kobe Bryant and Derek Fisher presented Jordan Farmar with his championship ring. Jordan (12 points and three assists) had an OK night, and fellow discard Sasha Vujacic was actually the Nets' second-leading scorer with 17 points. Alongside a near-career high of 35 points for Brook Lopez, these were pretty much the highlights for a New Jersey team that looks drearier every time I see them. Why Carmelo Anthony would even for a second consider joining these guys is a mystery. If someone attempted trading me to the Nets, I'd fake my own death and flee to Thailand like your dad did when you were nine.

Kobe, for one, missed the team meeting where it was announced that the Lakers wouldn't exert any effort tonight. He played a terrific game. Twenty-seven points on just 22 shots (including free-throw possessions) and zero turnovers for the Mamba, who's displaying some incredibly sharp form these days. As in the second half against Golden State, the focus of his assault was in the post and the midrange. He got some nice support from Shannon Brown (12 points and 10 shots) and Ron Artest (14 points on eight shots), who continues to improve his offensive productivity. As a team the Lakers took good care of the ball - this was only the fifth time this season they turned the rock over on fewer of 10% of their plays - and again enjoyed a huge advantage in free-throw attempts.

All this was helpful in papering over loads of mediocrity from the Laker bigs. Pau Gasol did score 20 in almost-efficient fashion thanks to an 8-for-8 performance at the line, but his D on Lopez was crap. Although Lamar Odom had a double-double, he missed six of 11 free-throw attempts and pulled in a cool zero offensive rebounds in 40 minutes - as telling a symptom as you'll find of the Lake Show's demotivated state. The champs had just two second-chance points tonight and collected no offensive rebounds in the second half. As for Andrew Bynum, he couldn't keep himself out of foul trouble and scored the princely sum of two points on 1-for-5 shooting. I wonder what T-Mobile Girl thinks of this! 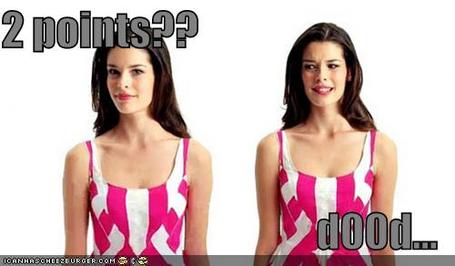 We should be neither surprised nor alarmed that the Lakers half-assed their way through this one. They played a rather eventful midweek back-to-back, have a tricky contest early Sunday afternoon with the Clippers and then have to deal with a sked that gets mucho difficult. Starting with Monday's game against the Thunder, the next 13 Laker opponents have a combined winning percentage of 0.612. With a death march on the horizon, it's just as well they're not burning themselves out against Jersey.

But I've saved tonight's really big news until the very end. A doggie was at the game! 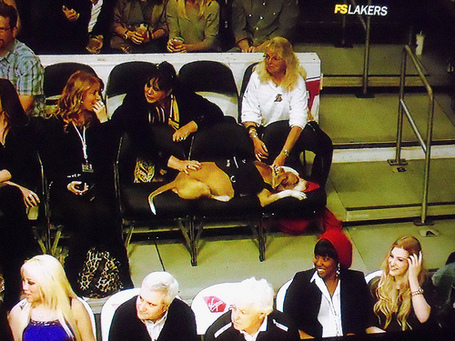 Cute, but you know, this is why the rest of the world hates Laker fans. I mean, just look at him. He's got kickass seats, and is he even paying attention to the game? Please. He's just there stretching himself out across three chairs LIKE ROYALTY, trying to look cool for the ladies in his sweet vest. I bet he even left early to beat traffic. The image of Laker fans will never improve as long as the best seats at Staples Center are going to corporate big shots like THIS DOG. I can't even type anymore, I'm so upset.