Over at Hoops World, Alex Kennedy has an article today about the Lakers' succession planning in the event that Phil Jackson decides to retire after this season. Obvs, we're a long way from having to worry about this, but Kennedy is a respected NBA reporter who unlike me doesn't shamelessly troll for page views, so his report on this topic is worth reading. Although much of the ground he covers won't surprise anyone who followed Phil's decision-making process last summer, there are some interesting morsels to chew on.

For instance, there's apparently a belief that Phil would be more likely to return to the Lakers in the event of an NBA lockout. A shortened schedule, the theory goes, could make one more season on the bench more palatable to Phil, as he considers his various health issues. That said, Kennedy writes, "the Lakers aren't crossing their fingers."

There's mention of Larry Brown as a possible replacement, but he strikes me as a quite poor fit for the purple and gold. Though I suspect he'd do great things for the Lakers' team defense, I can't imagine that the squad's accomplished veterans would be hugely interested to play for such an uber-controlling figure. I likewise can't imagine that Brown would be happy coaching for an organization in which he'd have little to no control over personnel.

Byron Scott refers to the Los Angeles Lakers' gig as his "dream job" and should he be relieved of his duties in Cleveland, there's no question he would be on the first plane to Los Angeles.

OF COURSE it's his dream job! Why wouldn't it be? More to the point, how is that a qualification? I can keep referring to the T-Mobile 4G spokesmodel as my "dream girl," but that's not getting her into my van, is it? 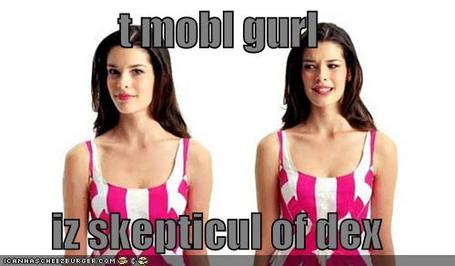 Scott grew up in California and spent eleven years with the Lakers during his playing career. While the Cavaliers signed him to a three-year contract over the summer, the team's struggles could lead to his firing which would allow him to pursue the job he has been eyeing since his coaching career started taking off.

So Byron would get fired by the worst team on the planet, and then immediately get hired to coach the Lakers? Yeah... I don't know, dude. I realize Byron's been dealt a gruesome hand with that Cavs roster, but the Chernobyl-quality meltdown happening in Cleveland on his watch isn't exactly burnishing his credentials. People fail upward all the time in this world, but I can't see Jerry Buss and Mitch Kupchak rushing to employ a guy Dan Gilbert just shitcanned after a 14-win season.

In the end, Kennedy comes back to the candidate whom we know should and probably would get the gig: The Shawfather.

[T]he most realistic option is turning the franchise over to lead assistant Brian Shaw. After nearly accepting the head coaching job in Cleveland, Shaw withdrew from consideration which led to Scott's hiring. Many league sources believe that Jackson and the Lakers would feel the most comfortable handing Shaw the keys to the franchise because there wouldn't be a philosophical shift or drastic changes. Shaw is comfortable with the personnel and has developed close relationships with many of the players in his eleven years with the organization.

Should Shaw get the job, don't be surprised if he fills out his staff with fellow assistants and possibly fellow Oakland native and good friend Gary Payton, according to league sources.

GP back in Lakerdom, barking out orders to Ron Artest? Hoooo boy. Pass the popcorn.