The Greatest Lakers of All Time, By Jersey Number (20 Through 29)

Share All sharing options for: The Greatest Lakers of All Time, By Jersey Number (20 Through 29)

What's up, rock stars? It's time for part three of my occasional series about jersey numbers and the Lakers who done wore ‘em. If you missed parts one and two (available here and here), you are clearly not a real Lakers fan and should put a cigarette out on your own forehead. But I forgive you, and in return I ask that you forgive me for what I'm about to confess.

In the last installment of this acclaimed series, I wrote that the honor of most frequently worn jersey in Laker history is shared by the numbers 11, 12 and 15. This is incorrect. I'd mistakenly overlooked a few guys who'd worn the number 20, which actually does hold the honor thanks to having, over time, appeared on the jerseys of an insane 21 different Lakers. Derp. For this error I apologize both to you, my readers, and to the number 20.

With the single-digit jerseys and the awkward teens behind us, today we're into our twenties. A few 20-something jerseys have been turned over every few years, several have been worn only once, and one of them hasn't been worn by anyone in team history. A couple have been retired by the organization and will hang from the rafters until an earthquake levels all of downtown Los Angeles forever.

Come with me now, as we resume our journey into the past.

Number 20: This one's associated with a whole lot of names, but not a lot of game. The list of Lakers who've sported the big two-oh is light on stars and heavy on journeymen (e.g., Milt Wagner and Rumeal Robinson) and historical curiosities (e.g., Bud Grant, who'd later win a Super Bowl as coach of the Minnesota Vikings, and Don Nelson, currently "coach" of the Golden State Warriors). Basically, the choice here boils down to Brian Shaw vs. Gary Payton. Before I reveal the winner in that battle, a few words about some of their early Laker forebears.

Two of the first four Lakers to wear number 20 were named "Whitey." (Please say hello to Whitey Kachan and Whitey Skoog.) This made me realize that you don't meet guys named Whitey anymore, which is probably a good thing. Without having researched the question, I'm guessing the practice of nicknaming dudes "Whitey" faded away after the Civil Rights movement. We should all be grateful for that, but just think: if only Adam Morrison had come along in 1952, he could've been called "Whitey Morrison."

Also, a special tip o' the cap to Normie Glick, who wore number 20 for the Minneapolis Lakers in 1949-50. Normie's entire NBA career consisted of one game played, in which he attempted (and made!) one field-goal attempt and dished out one assist. That's it. One game, one bucket, one assist, and he was done forever. How many guys can say they played in the NBA but never missed a shot?

But back to the case of Shaw v. Payton. Gary Payton is not fondly remembered by Laker fans. His signing in the summer of 2003 was greeted orgasmically, but he spent part of the regular season bitching about his role in the offense, he sucked throughout the playoffs, and he got annihilated by Chauncey Billups in the Finals. The experiment just didn't work out, and it ended on a particularly unpleasant note.

When you look back at his 2003-04 regular season numbers, however, they were really pretty solid. He played in all 82 games, had a good assist rate, took care of the ball and was a strong rebounder for his position. He wasn't Vintage Glove or even an All-Star, but that signing looked just fine until the playoffs rolled around. It's possible that we curators of Laker history have been insufficiently charitable to Mr. Payton.

That said, I'm reluctant to put anyone on this list who spent only one season in the purple and gold, so the choice here is the Patron Saint of Silver Screen and Roll, Brian Shaw. Before serving as Phil Jackson's right-hand man on back-to-back championship teams and emerging as Phil's successor-in-waiting, Shaw was a steady backup point guard in the threepeat years. He was nothing special on the court, but he knew his role, he knew how to play with Shaq and Kobe, he never busted the offense with stupid plays, and he was usually a solid defender. He always did the organization proud and continues doing so today.

Number 21: All together now. Cooooooooooop!!!  Michael Cooper, who spent his entire 12-year career with the Lakers, was the perfect third guard. Tall and rangy, he didn't need the ball to affect the game. Early in his career, his offensive specialty was finishing on the break off dishes from Magic Johnson. Later, he developed a three-point stroke and became more of an outside sniper. All along he was a premium defensive stopper, making the All-Defensive team eight times and winning DPOY in 1987. And of course, no one rocked the high socks like he did.

Fourteen other Lakers have worn 21, but none of them was in Coop's league. Let's put it this way: the runner-up here might be Ronny Turiaf. Basically, Coop could've been about 80% worse than he actually was, and he'd still easily take this category.

Number 22: This is another simple choice. Elgin Baylor is a colossus in basketball history. Out of Seattle University, where he was Most Outstanding Player in the NCAA tournament, Elgin became the first overall pick in the 1958 NBA draft. The 14-year NBA career that followed (like Coop's, spent entirely as a Laker) was incomprehensibly awesome. As a 6'5" forward he was a devastating scorer and rebounder, for his career averaging 27 points and 13 rebounds a game both in the regular season and in the playoffs. He made the All-NBA first team 10 times.

Amazingly, Baylor never won an NBA championship. An injured knee forced him to retire nine games into the 1971-72 season, which ended with an Elgin-less Lakers team winning the title. Nonetheless, anyone with an appreciation for the sport's past recognizes him as an unquestioned member of the inner circle.

Number 23: Did you know the Lakers once had a Jordan who wore number 23? Check it. 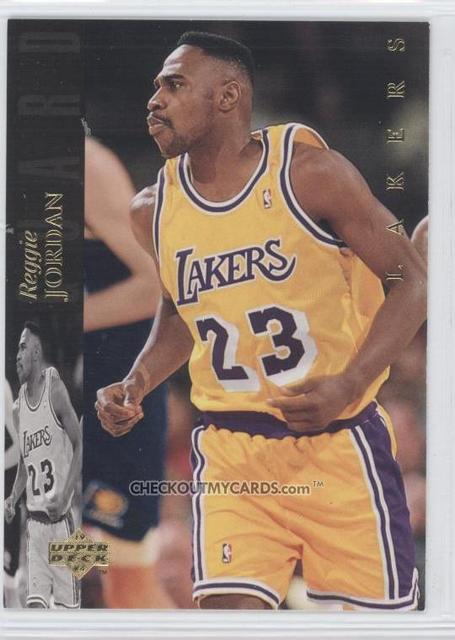 O HAI, Reggie Jordan. That's a nice flattop you got there. Much though I admire the hair styles of the early ‘90s, it's not enough to gain you admission to this elite club.

Instead, this is where we honor garbage-man extraordinaire Cedric Ceballos. Ced was another mainstay on those Clinton-era Laker teams that weren't all that great but were really fun to watch. Also fun to watch? This.

OK, first of all: not only is someone wearing a Duke jersey in that video, but it's actually a Cherokee Parks jersey. This is an example of what the world's top scientists refer to as a LOL WUT. But putting that aside... the song's not terrible, right? I don't know anything about rap music because I'm whiter than Whitey Skoog, but Ced doesn't seem to be embarrassing himself on the mic. Maybe he just seems cool by comparison because he's NOT WEARING A GODDAM CHEROKEE PARKS JERSEY.

Number 24: Yeah yeah, Kobe Bryant. What I want to discuss are the guys who wore 24 who aren't Kobe Bryant. It's a fascinating crew.

To begin with, there's the awesomely named Dick Schnittker, who had number 24 briefly during his rookie year before switching to 15, the number for which we honored him in our last installment of this series. In the 1980-81 season, number 24 was worn by Butch Carter, the older brother of former NFL wide receiver Cris Carter. In 1989-90, it was worn by the worst Laker in history, Steve Bucknall. And in 1995, it belonged to NYC high-school legend, onetime crack addict, shooting victim, NBA journeyman and all-around cautionary tale Lloyd Daniels.

Most infamously, Kermit Washington was wearing number 24 when he damn near murdered Rudy Tomjanovich.

It's probably for the best that 24 will (one imagines) be retired when Kobe hangs ‘em up. That number's been through a lot.

Number 25: Speaking of retired numbers, here's the one belonging to Gail Goodrich. I know I'm treading onto dangerous ground here, but I'm going to say this anyway. I'm not sure Goodrich's number should really have been retired.

Don't get me wrong, the guy was very good. He was a Laker for nine seasons and contributed a great deal with strong, well-rounded guard play. But his numbers aren't really that amazing, he was on only one NBA championship team, he made the All-Star game only six times and All-NBA only once. It's a great career, obviously, but I'm of the view that you don't get your number retired by the Lakers unless you're among the elite of the elite. Goodrich doesn't strike me as one of the all-time greats so much as, like, the Tony Parker of his day.

Granted, I've only seen Goodrich in highlight footage. It's hard to evaluate, other than in broad terms, the careers of guys you haven't spent a hundred hours watching. I'm just saying that based on my limited-but-not-wholly-ignorant understanding of Goodrich's career, the retirement of his number seems a bit much.

Number 27: Brothers and sisters, you know what time it is. The moment you've been waiting for has arrived. The moment has come to pay homage to the only man ever to wear number 27 for the Lakers, Mr. Art Spoelstra.

Look, I swear I'm not making this up. Only Art Spoelstra, who played 50 games as a Laker in 1957-58, has worn 27 for this great organization. Why has no one worn it since? Got me. Just be glad Smush Parker never wore it, or we'd have to put him on the list.

So, Art Spoelstra... the man's a bit obscure, in hoops-historical terms. Best I can tell, he's not related to Miami Heat coach Erik Spoelstra. I did find this obituary from when he died in Evansville, Illinois back in 2008. Here's what I learned:

In conclusion, Art Spoelstra sounds pretty cool. Some may criticize him for not being a father to his son, but keep in mind: kids are stupid and annoying, and Art had important partying to do. I think history will vindicate his life choices.

Number 28: I don't know what it is about these numbers in the high twenties, but very few Lakers have been drawn to them over the years. Once again here's a jersey number that only a single Laker has ever worn. You know who I'm talking about. I don't even need to type it. Let's just roll the clip.

Hard as it is to believe, no one in Laker history has ever worn jersey number 29. Is it haunted? Are basketball players superstitious about prime numbers? Let's go with haunted and call it a day.