Beyond the Numbers: How We Think About Basketball Stardom

Share All sharing options for: Beyond the Numbers: How We Think About Basketball Stardom

(Editor's Note: We're very pleased to have a guest author today. Many of you know Brian Tung from his fine commenting work here at SS&R. Some of you may be familiar with his excellent blog, The Null Hypodermic. He does a lot of thoughtful and original writing about basketball and other topics, and at our request he generously agreed to author the essay below. Please enjoy. ~DF)

Superstars are rare. We who are Lakers fans might lose sight of that from time to time, because we've had the fortune to watch so many, but it's true: Superstars are few and far between. It's part of what makes them superstars.

In this dispute by proxy, statistics seem like a way out. Statistics play no favorites; they are simple numbers, with no dog in the fight. They lend an air of objectivity to this kind of comparison, and the more advanced the statistic, the more objective the air.

I think that's an illusion. Statistics are wholly unsuited for the task of comparing superstars. I consider myself a practicing stats geek, so that may sound strange coming from me, but it's true: Statistics are no good at deciding which superstar is greatest. As I've outlined here and elsewhere, statistics are flawed in many technical ways. They're either gathered by biased scorekeepers, or else they're based on those that are. They make fundamental assumptions that aren't rigorously examined. They have arbitrary factors that carry, unspoken, the predilections of their designers. They ignore much of the game context (in large part because almost none of that game context is recorded, although that should change in the near future). They're almost always single numbers that can't properly represent multidimensional players, no matter how well they're designed (the numbers, not the players).

But all of that, all of it, is secondary to the real issue, which is that statistics define greatness wrong. I want to be clear here, in case there's any possibility of misunderstanding. It's not that the statistics leave greatness poorly defined. They don't. They're quite precise about what they measure. They're just wrong. Or, more accurately, we're wrong for using them as a yardstick for greatness. 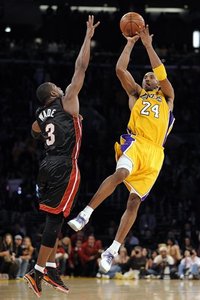 Listen: Statistically speaking, believe it or not, Kobe Bryant is not a clutch shooter. In terms of crunch-time shooting percentage (however you choose to define that), he's good but not great, typically ranking in the top third of the league or so. One could come up with a variety of explanations for that. Maybe Kobe shoots a lower percentage because he gets off shots that lesser players can't, or won't. Maybe he's actually distributing the ball effectively toward the ends of games, but he's getting it back with too little time on the clock to find a decent shot. Or maybe he's putting up a trey to win outright, rather than a deuce to tie and play overtime (a sound strategy, by the way). I don't know for sure if Kobe would come off better if we could somehow account for all of these factors, but it's possible.

Really, though, none of that matters, because when you get right down to it, that's not what you think of when you think about clutch shooting. What you think of are all the times that a player has the guts to take and make big shots. It's fashionable to say that our memories are subjective and selective and that statistics help to cut through to the heart of the matter, but that's got it all backwards. A tactician may find it his job to think that way, but for us fans, clutch shooting is subjective. It's something near and dear to the heart, and it makes no more sense to foist supposedly objective numbers onto it than it would to pick your favorite relative that way. (Or your least favorite.)

Why is greatness so difficult to circumscribe with numbers? Some of that has, I think, to do with how we think about sports. We identify with our sports heroes much as we do with our military heroes, and for similar reasons. Sports are the closest peacetime analogy we have to war: conflict, strategy, tactics, victory, defeat, and rabid allegiance to boot—these are common to both endeavors.

But for better or worse, war has two things lacking in sports: ambiguity and finality. War may end with many victors, one, or none at all, but whatever the outcome, it is pervasive, it is crushing, and it cannot be undone. In sports, the greatest triumph one can celebrate is a championship, which in most instances is good for but one year. (Four at best, in the case of an Olympic title.) And someone always wins. The throne must either be defended, or relinquished. One never holds onto it by default.

The one thing that does persist, through all of the temporary victories, is a continuous record of personality, both team and individual, personality that is yet more prominent in sports than in war, precisely because of that lack of finality.

And of what does sports personality consist? When we talk basketball, does it live in points and rebounds, in PER and adjusted plus/minus, in win shares per 48? Do we remember players for their shooting and rebounding percentages? Numbers—not even the number of rings in a player's championship ring display case—simply cannot grab hold of us like that. Instead, we remember superstars for the memories they have given us, time and time again, in ways that more ordinary players cannot possibly hope to sustain.

Wilt, Magic, and Michael lived in the age of film, their greatness handed down to us in celluloid and videotape. One could easily construct an hour of highlights from each of their careers. Kobe and his fellow superstars live in the age of YouTube, volatile and everywhere. No moment is left unseen or unmixed. Can you imagine, once you allow yourself to think forward a few years, what kind of highlight "reel" is going to accompany Kobe's retirement? Most of you can already rattle off many of the moments that will be relived in digital splendor: the air balls against Utah in 1997; the alley-oop from Kobe to Shaq toward the end of Game 7 against Portland in 2000; the tip-in late in Game 4 against Indiana that same year; the twin three-pointers against Portland again in the last regular-season game in 2004; eighty-one (need one say more?); the crazy end of Game 4 against Phoenix in 2006; the smothering disappointment of Game 6 against Boston in 2008; the trio of true buzzer-beaters against Miami, Milwaukee, and Sacramento this past season, and a handful of game-winners besides.

Hours and hours of memories, potentially, only one of which will have a number readily associated with it. And it still won't be one that stat geeks (myself included, keep in mind) will ever support.  In contrast, imagine that at that time, we have the technology to VideoShop™ out Kobe's face, his uniform, his number(s)—everything but his game. That game would still be instantly recognizable, and would still bear the unmistakable imprimatur of greatness.

Statistics have their role in this discussion, but just a supporting one. They serve as both a reminder and an incomplete measure of the overall body of work in a superstar's career, a body of work far too large on its own to encompass in any reasonable way. We will marvel at them, and wonder that any player could achieve them. But we will not remember them, because we don't want to. What we want to remember—what we will remember—is the indelible vision of Kobe, his arms outstretched, delirious with joy and disbelief, running after and grabbing hold of Lamar Odom's floating downcourt pass, while all the purple and gold streamers in the world are raining down on the hardwood.