This is the next piece in our series of Player Report Cards, in which we evaluate and assign a grade to the performance of each member of the 2009-10 Los Angeles Lakers. Next in line is Sasha Vujacic, a.k.a 'The Machine'.

I'll be honest with all of you, I'm one of the few who believes that Sasha Vujacic is a better player than Shannon Brown. Sure, a quick look at their respective numbers last season would cause many to laugh at my position, but I believe that for these Los Angeles Lakers, letting Brown go in Free Agency and giving Sasha his minutes may prove to be addition by subtraction for the Lakers.

Sasha Vujacic has all the traits of a very good pure shooter, with a career 3-point percentage of 37% (nearly 39% before last season) and career FT% of 88. Generally, his form is good, and his release lightning-quick. He is most certainly overpaid for being an essentially one-dimensional player, earning $5,000,000 for the 2010 season, but he is still a serviceable player.

And that contract is the root of all his problems. After his excellent 07-08 showing netted him a 3-year, $15 million contract, Sasha felt that he needed to expand his game in order to truly earn that contract, and thus started attempting to create off the dribble, and work for his own shot. In doing so, he ended up turning down many threes in favour of drives. This was a major issue, considering Sasha is a highly mental player, and thus his rhythm and confidence greatly influence his ability to shoot.

In the 08-09 season, he averaged a full 1 three less per game than in the prior season, and this affected his rhythm. Couple this with the fact that his attempts to create for himself were not all that efficient, thereby reducing his confidence, and an explanation arises for why his 3pt% dropped so drastically from 44% in 07-08 to 36% in 08-09. While his all-round stats actually stood rather even or even improved in this period, his main asset to the Lakers was his ability as a shooter, and when that disappeared, much of his PT followed.

In the '08-'09 playoffs, the Lakers were desperately in need of shooters, and simultaneously Shannon Brown, recently acquired in a trade with Charlotte, caught on fire from deep, shooting 48% for the Playoffs. Hence, Shannon Brown slowly began to encroach upon Sasha's spot in the rotation.

In the '09 offseason, Sasha tried out for the Slovenian National Team, and an injury cut him from the squad. This further caused his confidence to plummet, not good for his future considering that the Lakers had three backcourt subs coming into the next season, with only enough playing time for two. Shannon quickly started turning heads with his offensive potential, and soon pushed Sasha out of the rotation, leading to the disaster of a season that was '09-'10 for Sasha Vujacic. 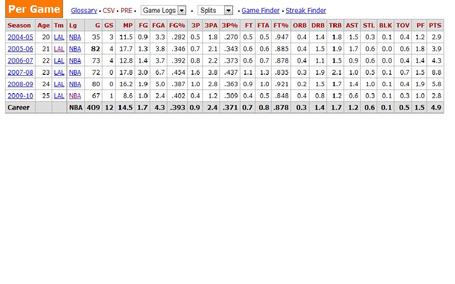 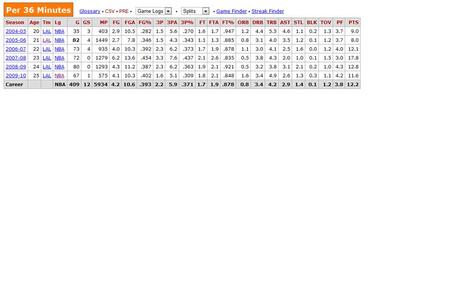 Hmmm... there's not actually a major difference. His 3pt% dropped off a cliff, but it's fairly evident that Sasha's confidence greatly impacts upon his ability to shoot, and the plummet in his minutes and loss of his spot in the rotation certainly eviscerated his confidence. His steal numbers dropped, likely due to a fear of being benched due to silly fouls resulting from over-gambling. His assists also dropped, likely due to not trying to create as much. His turnovers slightly increased, also. But his field goal percentage... went up? And his rebounding numbers also improved.

It seems that Sasha's 'terrible' season was really just Sasha, but in limited minutes and thus with no confidence.

Every time Sasha started playing well during the season, something bad happened. First time around, he ended up injuring his shoulder. Second chance, he got into an argument with Brian Shaw, sparking one of the funniest SSR threads of all time and earning himself a benching until he bought the coaches breakfast to apologise for his misbehaviour. While it took him a while to work up the maturity to apologise, he eventually did so, and then returned to play reasonably well until an injury in the season finale took him out for the first two rounds of the Playoffs.

But this season taught Sasha something. He know has composure, can now, for the most part, control his emotions. He knows it's the only way he can get minutes. Asides from the Dragic incident (the only thing I'd do differently if put in Sasha's scenario would have been to make sure to take some teeth out), Sasha was widely composed during the Playoffs

Now let's try something else; let's compare his Playoff numbers for the last three years: 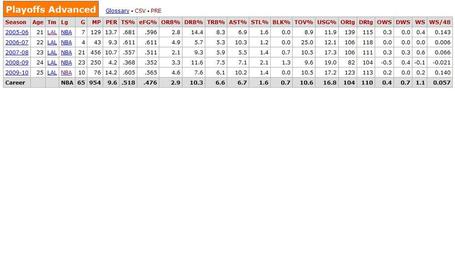 Ladies and Gentlemen, Sasha Vujacic effectively performed better when on the floor last postseason than he has ever done. Small sample size, of course, but knowing Sasha's style of play, it seems likely the larger the sample size is, the better he plays, due to increased rhythm and confidence.

And as for his defense... I'm sorry, but no matter how often Sasha Vujacic commits stupid fouls, I do not see any way in which he can be considered a worse defender than Shannon Brown. He possesses superior length, comparable quickness, and infinitely higher effort on that end of the floor.

Sasha Vujacic has the ability to harass offensive players and even occasionally get under their skin, this ability largely being borne of Sasha's intensity. Goran Dragic may be quick to point out how this intensity on defense may backfire on Sasha, but one negative instance compared to seasons of decent defense does not a case make.

Offensively, Sasha has often been criticised of trying to do too much, to try and cram in 30 minutes' worth of play in 10 minutes. Over the lessons learn throughout last season, I am inclined to think that much of this will no longer be a factor.

Sasha also knows the offense well, and can execute it, provided he does not feel like jacking up a quick shot. Much was made of Luke Walton's ability to help the second unit run the Triangle, but after Luke and Lamar, Sasha was probably the best initiator of the Triangle on the Lakers' bench last season.

Many of the major criticisms brought against Sasha Vujacic, that he commits stupid fouls and tries to force too much on the offensive end, are borne of his intensity, desire to do well, and will to win. I can't find a fault with that. I just can't.

One of the main reasons one is likely to pick Shannon Brown is his athleticism, highlighted by his dunking ability. My counterpoint is simply this:

(On a side note, Sacramento, this is why you suck)

Last season as a whole was undeniably atrocious, but that doesn't mean we should write off Sasha Vujacic just yet. I've heard many inquire as to whether Ebanks or Barnes could play the two-guard position, so as to keep Sasha out of the rotation. Not so fast, I say. The man can shoot, handle the ball and defend, and he knows the offense. Personally, I see good things coming from him regaining some of the minutes Shannon Brown took from him last season. His confidence is back, courtesy of these:

Of course, nothing I say can justify Sasha having a higher grade for the '09-'10 season than a

But expect higher for next season, is all I'm saying.

After all, he is the Machine. And it is a contract season.

All stats are courtesy of Basketball-Reference.com