Is Jordan Using Kobe to Protect His Legacy from LeBron?

Share All sharing options for: Is Jordan Using Kobe to Protect His Legacy from LeBron?

Finally.  Michael Jordan, widely considered the Greatest Of All Time, has weighed in on the Kobe Bryant vs. LeBron James debate.  He has chosen to do so on the heels of LeBron's "Decision".  First there was his one word answer on whom was the better player between Kobe and Lebron.  The answer?  Kobe.  Now, he has gone on record on video stating that he would have never done what LeBron did in going to Miami.

"There's no way, with hindsight, I would've ever called up Larry [Bird], called up Magic [Johnson] and said, 'Hey, look, let's get together and play on one team,'" Jordan said after playing in a celebrity golf tournament in Nevada. The interview aired on the NBC telecast of the event. "But that's ... things are different. I can't say that's a bad thing. It's an opportunity these kids have today. In all honesty, I was trying to beat those guys."

His Airness is throwing dirt on LeBron in a preemptive strike.  Here's why...

First the props to Kobe, then the smear campaign on LeBron's competitive nature.  After 2-3 years of the Kobe vs. LeBron debate, Michael is just now letting himself be recorded saying Kobe is better, and letting his thoughts on LeBron be made public.  Why now?  After never seeming to give any answers on the subject so publicly.  Jordan, also known as the "Black Cat," has pounced on a great opportunity to protect his own legacy in the wake of LeBron's choice to join a super team in Miami.  Michael Jordan is a man who wanted to destroy everything in his path and make sure you knew he did it.  Jordan is laying the groundwork to make sure we never view LeBron in comparison to himself.

Jordan has been at this same point in his career.  He has been the LeBron to Kobe's Magic.  He had zero rings to Magic's five, but all these great stats to show for it.  So, he knows all too well what it can mean for LeBron to "figure" it out.  From gaudy stat machine to true champion.  But the "King's" path would be different.  LeBron opted out of getting over the hump, like Mike did.  LeBron's Cavs teams were right there, just like those Chicago teams were.  Jordan and the Bulls took their lumps and overcame though.  They finally beat the Pistons, then Magic's Lakers, then owned the NBA for years.  Jordan's assumption of power was natural because of the long journey it took to get there.  Then he did it while Magic, Larry and Isaiah were still dominating the NBA.  Not only were they still playing, but Magic, Larry and Isaiah combined to win the previous five championships.  Michael took the league from them while they were still reigning.  Which brings us to Kobe and LeBron.  Right now, this is Kobe's league.  Never mind LeBron's MVP's and pretty stats (which aren't much better than Kobe's, by the way); LeBron still has not beaten the previous generation, like Michael did.  He was swept by Tim Duncan's Spurs in the 2007 Finals, and has failed to show up to the Finals as Kobe builds his second dynasty.  So, Michael wants to exploit that fact and let us think about it.  He beat Magic.  Why can't LeBron beat Kobe? 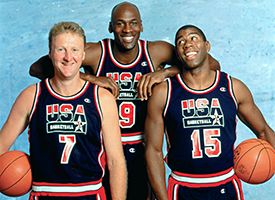 I have always thought the best ways for Kobe to gain more favor in the VS. debate between he and LeBron was for Jordan to back Bryant publicly.  There are many people who dislike Kobe due to his similarities to Jordan.  They feel Kobe is trying to emulate Michael, and hold that against him.  Whatever.  You read in articles, blogs, and comments: He's no Jordan; He will never be Jordan; Jordan was better at this; Jordan was always the man on his team; Jordan never lost in the Finals.  It goes on.  The way LeBron's career had gone until July 8th, many of those arguments could not be used against LeBron.  This is what Jordan realizes.  So now, he is backing Kobe, and highlighting LeBron's public relations gaffe.  I do not think Michael's endorsement was truly sincere.  It seems more self serving and opportunistic. 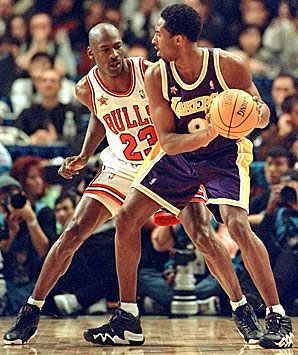 Jordan's endorsement of Kobe helps Jordan out just as much.  If Jordan can paint in our minds that Kobe is definitively better than LeBron, then there is no way LeBron can ever be better than Jordan.  Or at least perceived that way.  That is what all this boils down to.  The reason Jordan can be safe finally backing Kobe is because he knows that Kobe will never viewed as the better player than he.  Never.  It will not hurt Jordan to put Kobe on his pedestal.  Jordan's image as a player is too clean.  Too perfect in most people's eyes for Kobe to ever overcome the slights and personal disgrace he has endured in his career to overcome the shadow that is Jordan's G.O.A.T. legacy.  In reality, Kobe has put together a resume that should keep people legitimately putting Kobe and Jordan in the same breath.  We can debate whether or not it's true another day, though.  But LeBron?  With the way his career has played out so far, he still has had a shot at the G.O.A.T. tag.  He had perception working in his favor.  LeBron's career path was eerily similar to two players.  Jordan's and Shaquille O'Neal's.   Both player's were dominant players who did not win titles until their seventh years in the NBA.  At this respective point in their careers, like Jordan, they had the great stats, accolades, and were both considered by some the best player in the NBA.  Like LeBron, Shaq was a physically gifted force that could not be matched by any other player in the NBA.  But Shaq never had the determination that Jordan did - that Kobe also has.  Its that determination that Michael used to dominate his peers, and why Kobe is still dominating today.  LeBron has now put himself in a situation that could lead to domination.  Will we respect it the same, though? 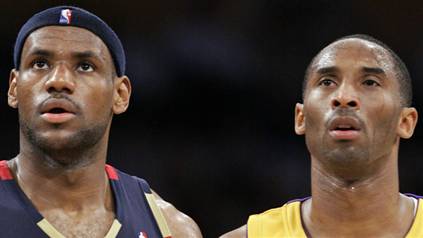 Whatever path LeBron's career takes now, Jordan wants us all to know that it will never be greater than Kobe's, thus never becoming better than his own.  If LeBron does finally overthrow Kobe, it will not be organically like Jordan's coup over Magic, Larry and Isaiah.  If it happens, it will feel like it is supposed to happen.  There is no journey that comes with the path that LeBron has chosen.  So that when the time comes to pick apart the small differences in what separates the truly elite all time greats, we will all remember the choice LeBron made, and how the greats before him would in "no way" have gone out like that.  Jordan will be there to remind us.  If you don't think Jordan would bother himself with these kinds of thoughts, I have seven words for you:  Michael Jordan Basketball Hall of Fame speech.