Guest post: To Win The World, Revenge is a Dish Best Served Cold

Share All sharing options for: Guest post: To Win The World, Revenge is a Dish Best Served Cold

[Editor's Note: We're honored to have a guest post today, courtesy of Don Landrigan from the immutable With Malice. Don hasn't allowed living half way across the world (in Japan) to preempt his fanaticism for the Purple and Gold, and we're all better for it. His own love-child (Lakers blog) is fantastic, but there is room in a man's heart for more than one mistress, and Don has recently become a regular commenter with Silver Screen and Roll.  Just don't say hello to him, that shit will get you banned.  If you like what you see here, make sure to check out With-Malice.com. You shant be disappointed.]

"And if you wrong us, shall we not revenge?"
- William Shakespeare

Of all motivating forces, this has to be one of humanity’s greatest... as much as we talk of it "not being so".  There will be those amongst us that will assert that surely we’ve progressed beyond this, but it’s just not the case. Everyone loves a good revenge story.  An epic reprisal where the villain meets unrelenting vengeance.  From the Bible’s Old Testament, to Hamlet’s eventual meeting out of justice on his Uncle Claudius, to Quentin Tarantino’s blood-lusting bitartite Kill Bill Vol. 1 & 2.  Revenge lies at the heart of each.

Every good revenge piece needs a sympathetic protagonist, and it’s all that much better when we have heroes seeking redemption.  Ideally, the principals must have flaws, evidence of their humanity and these flaws must make the undertaking perilous.  Of course, the inverse is true as well – for the story to run to script, there must be villains so foul and underhanded that the audience can’t help but despise them.  And therein lies the story of the 2010 NBA Finals.  As much as LA has declared otherwise, the 2008 Finals, how they went down, and vindication for the work done between then and now will provide heady motivation for Phil Jackson's team.  I say don't ignore this very human trait.  Accept it.  Embrace it.

The LA Lakers – this trip to the Finals has a strong resemblance to Rocky II, the Lakers seek redemption and ratification.  They’re a team fraught with strong undercurrents and sub-plots... especially amongst the leads. Questions exist on each and every one of them, which will just make vindication in the final reel all that much sweeter.

The Shooter: A truly amazing player gunning at other-wordly levels, Kobe Bryant is still haunted by a past no-one can forget – both on and off the court. Even to this day, questions exist as to his leadership, and even his legacy lies on the line in this series. Here... now: winning this title would put a lot of those questions to rest. Lose, and the questions only get louder.

The Scholar: The abuse that Pau Gasol suffered at the hands of the Celtics in the 2008 Finals cemented the knock on LA's #16: he's a soft Euro. Even the deconstruction of Dwight Howard in last year's Championship has done little to erode this perception. Only a win with dominant play in the Finals versus the team that destroyed him will change this. Nothing else can. And a loss would highlight his lack of toughness.

The Fool: The lone Laker that didn't play on last year's Championship winning team, Ron Artest at times seems an innocent, at other times plays the fool, and yet other times appears a villain himself... sometimes all within one game... sometimes all within one minute. No matter what, Ron's history will be largely how he's remembered, and nothing looms larger on Artest's resume than November 19th, 2004. This team may well be Ron's last chance at a ring, and go at least a distance in remedying the wrongs he's done to basketball. Winning a title won't put the demons to rest for one of this generation's best defenders... but it will help to muffle their screams.

The Enigma: It's often said of Lamar Odom that he has amazing talent... but is incapable of applying it night in, night out. Odom is generally seen as LA's barometer... if he plays well, the Lakers do well. One of my favourite moments last season was LO getting right up in KG's grille. More of that will bode well for our happy band of heroes.

The Intangibles: Is there anything better than a grizzled veteran once more taking up the mantle to hold back the evil hordes? Against all odds, and winning... Derek Fisher has turned back the clock, resurrected his vaunted intangibles and at least fought to a draw with younger, better opponents. Soon, he'll have the fight of his life.

There are other key performers - The Man With One Leg, The European Firebrand, The Guy desperately-trying-to-live-up-to-dad's-standards, the schizoid-personality Farmar Brown... and of course, Big Chief Tenrings.

But what of the antagonists? Their cast of characters is just as pronounced.

The Actor: It's a near thing as to who gets arch-villain status for the Boston Celtics, but "Priscilla" Pierce goes as close as anyone can. This self-proclaimed 'best player on the planet' - able to leap to tall histrionics in a single bound, Paul Pierce is ready, willing and able to lay it all down on the ground for his Celtics... whether injured or not - that's irrelevant.

The Dog: Kevin Garnett might be aging, might be playing on one leg... but never doubt his intensity. The screams, the antics, the intimidation; it will be interesting to see if it's present - as it was in 2008 - against a team that is no longer intimidated by him... and possesses Ron Artest. I'm really, really hoping that KG tries some antics on Ron. That... could get interesting.  Kevin Maurice Garnett is a man willing to do whatever it takes. Oh... unless you're bigger than he is.

The Man With (almost) No Fear: It's said that the only thing Kendrick Perkins fears is an open jump-shot, and it's something that the Celtics don't offer much up to him any way. But Perk has a fatal flaw, his temper. A perfect script would have this appearing somewhere during games 2-4...

The Kid: It's amazing how far he's come, Rajon Rondo. Not so long ago he was thought of as self-effacing, almost humble. Now? Well... suffice to say he's become a full-blown Celtic (and that's nigh on incurable - even with strong antibiotics!). The Kid demolished Cleveland, at times tore Orlando asunder... and 'The Kid vs The Intangibles' will be a mighty fine subtext for the morality play that unfolds before us beginning June 3rd.

Just like the Lakers, there are a host of other characters. Villains every one of them. Even the seemingly nice guy, Ray Allen. Surely there's something despicable about someone who once played "Jesus"...

But to the series itself... could Hollywood write a better script than that which we have laid before us? The Los Angeles Lakers, so devastated at the hands of the Boston Celtics in 2008 get an opportunity to exact vengeance and excise the demons of the past. For Phil Jackson, it's another tweaking of Boston Celtics' history. For Pau Gasol and Lamar Odom, it's their chance to redeem themselves to the basketball world on the very heads of the players who made them appear soft, unfocused, unwilling. For Ron Artest, wanting a title so badly that he's completely changed his game in coming to LA, it will be vindication of choices made. For Kobe Bryant, it's the opportunity to defeat the one last foe he has that remains unbeaten.  To exact a form of vengeance on the only opposition that remains unvanquished. 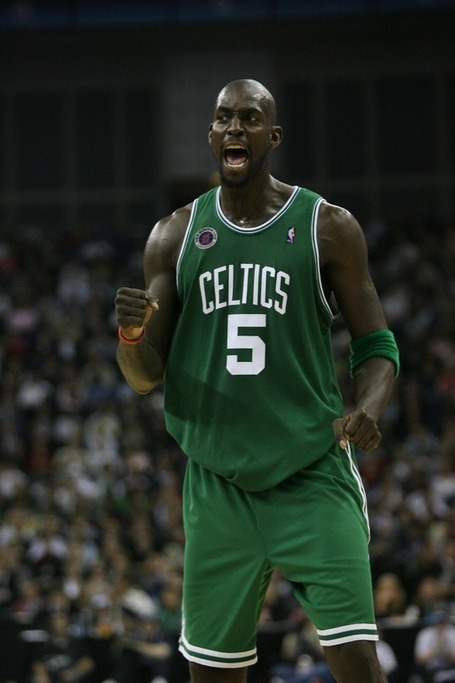 For all the spouting of Ubuntu, the above rings true when considering the Celtics. Brim-full of anger, angst and antipathy... with a healthy dose of acting thrown in for good measure. To be completely fair: the shot at a title is motivation enough... enough for most teams. But the stars have aligned to provide LA with something entirely different. A title ... and vengeance.

It's time for the Lakers to take arms against a sea of troubles, and by opposing: end them.