The Phoenix Suns have faced the Los Angeles Lakers at Staples Center three times this season, and all three times the Lakers have butchered the Suns' def-, er... "defense." In November, the Lake Show scored 1.20 points per possession (PPP) against Phoenix. In the December matchup, they scored 1.23 PPP. Last night they disemboweled the Suns worse than ever, ringing up an out-of-control 1.39 points per trip. Three of their best offensive performances of the season, and I don't know about you guys, but I'm starting to think it's not a coincidence that they came at the expense of squishy-soft Phoenix.

As we turn the page from the Lakers' exhilarating Game One blowout and peer ahead to Game Two this evening, a single question looms over all others: can the Suns do something, anything, to keep the Laker attack from running wild? The Phoenix offense was fine on Monday night. The Phoenix defense wasn't even close to fine. It didn't inhabit the same dimension as fine. To make contact with fine, it would've needed advanced forms of black magic or a science fictiony time-space portal.

Will Alvin Gentry and Phoenix make the proverbial Game Two adjustments tonight? It'd be nice if they didn't, since that would mean the Suns once again get their asses beat like they got caught stealing the Lakers' cars. That, unfortunately, seems too much to hope for. The Suns know that whatever they tried in Game One doesn't work, and in a best-of-seven series there's not that much time for luck to even out. (Sorry, Amare.) "Let's keep doing the same thing and hope their shots don't fall" isn't much of a strategy, so let's figure out what razzmatazz Gentry might have in store for us.

First and foremost, it seems assured that the Lakers will see some zone defense tonight. They got to the rim unimpeded way too much in Game One. The Suns don't have the individual talent to keep Kobe Bryant or Lamar Odom from knifing into the paint or Pau Gasol from dancing around defenders in the post. They need a team-based approach to keeping the ball on the perimeter. True, the Lakers killed them from behind the arc on Monday, making 8 of 17 three-point attempts, but if the Lakers are going to shoot like that from outside, you're going to lose anyway. The formula should be to take away the inside game and hope Laker outside shooters revert to their season-long averages. The Suns played some zone in the last regular-season contest between the two teams. The Lakers didn't look comfortable trying to attack it.

In addition to discouraging drives to the hoop, a zone could have the benefit of generating a few extra turnovers. The passing lanes look unfamiliar, and the Lakers could get impatient and try to force the ball into tight spaces. Phoenix could use the steals. They came up with only nine turnovers in 92 possessions in Game One, continuing an incredible run of Laker steadiness. Since halftime of Game Three against Utah, the Lakers have had 227 offensive possessions and turned the rock over only 18 times. That's the sign of an offense that knows where the ball should go and that gets it there quickly and cleanly.

The other big adjustment one can expect from the Phoenix D is some double-teaming of Kobe. Le Mamba Noir had one of his all-time great playoff performances in Game One. He's probably not going to play at that level tonight - he won't have had a week's worth of rest this time, and those heights of magnificence are hard to sustain even for talents as immense as Kobe's - but if he's even close to being that deadly, Gentry really has no choice but to bring help and make him give up the ball. Problem is, Kobe is fantastic at punishing double-teams. He hasn't faced many this year, but both Denver and Orlando tried it in the playoffs last season, and Kobe had little difficulty either splitting the double on the bounce or passing out to the open man. It's a high-risk strategy for Phoenix, but they might not have any choice. 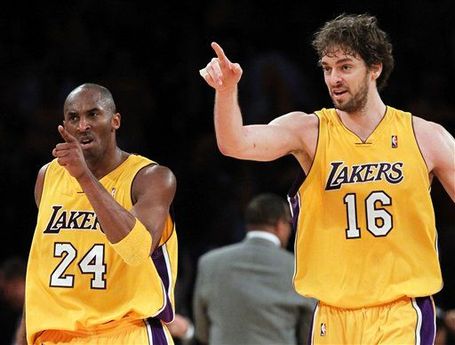 There are a few things that went right for the Laker offense in Game One that we can't count on every night. Kobe made 6 of 10 long twos and 3 of 6 three-pointers, both well above his season averages. Those averages were depressed by health problems that don't seem to be bothering him anymore, but these are still tough percentages to maintain. Lamar was superaggressive going to the hole, and we know that vivacity can disappear from his game without warning. And can we really expect him, Shannon Brown and Jordan Farmar to bury 4 of 6 longballs again? Hey, great if it happens, but I wouldn't bet my refrigerator box on it.

Despite these caveats, the Laker offense is in firm control of this matchup right now. Phoenix simply isn't stocked with skilled individual defenders. They don't have the speed to stay in front of guys. They don't have the strength to push opponents out of their comfort spots. They don't have the length to bother shooters. And frankly, they don't play with the orneriness that could make up for some of these physical shortcomings. If the Lakers stick to their gameplan and play to their strengths, Phoenix won't be able to lay a glove on them.

And what of the Suns' offense, that legendary unit people write operas about? A lot of talk has zeroed in on their poor three-point shooting. They made 5 of 22 attempts in Game One, which isn't likely to happen again. Jared Dudley (1 for 5) and Channing Frye (1 for 7) were the chief bricklayers. Phoenix needs them to get it together, and they probably will to some degree. On the other hand, it's not like Robin Lopez is going to shoot 6 of 7 every night, and odds are the Suns as a team aren't going to enjoy another big free-throw advantage. There were some fluky things that went the Lakers' way on Monday, but not every fluky thing went the Lakers' way.

I'm interested to see what Steve Nash comes up with tonight. He was OK in Game One. He did a fine job of dishing to the roll man, leading to a half-dozen or so easy Phoenix shots at the rim. But he missed both of this three-point attempts, was useless on defense and committed three turnovers in the third quarter when the Lakers went on their massive surge. It was a pretty underwhelming performance for a guy billed as a weapon the Lakers would have no hope of stopping. Goran Dragic was actually the more efficient point guard, though granted, he often got to work against the Laker reserves.

As always, it would behoove the Lakers to make this a short series. I'm not convinced the Orlando Magic are dead yet, but they're certainly in a distressed state, and a sweep at the hands of the Boston Celtics is very conceivable. The Lakers would do well to keep pace with their loathsome East Coast rivals by logging their eighth straight playoff win tonight.