With the Cavs-Celtics series all wrapped up now, it's time to re-focus our attention back to the series we REALLY care about.

And what better way to get your attention than to present my Western Conference Finals preview in the form of an early 1990s Video Game?

The ratings are only loosely based on statistics, and more on my general impressions of the players involved.

If I offend anyone with the ratings, too bad, I did my best (for example, I have no idea of how clutch Channing Frye is - maybe Phoenix fans will have more insight). Again, this is my viewpoint as a Lakers fan, and I had to do all the tedious work in Photoshop, so I get to decide what Ron Ron's passing rating is!!!!

Also, because so many Phoenix Suns players logged substantial minutes it was tough to choose only six players, but I took those who played the most per game in this year's playoffs (if I could have included Dragic, he would have gotten all 10s).

The ratings should give you a good idea about how I think the series will play out, and what each player's strengths and weakness are. 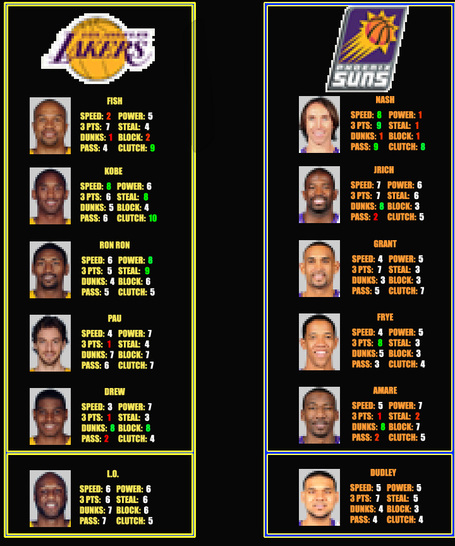 An enlarged version is after the jump.