So, what now? Calming down might be a good start

Damn, that was an ugly loss.

Now, let's examine the reasons: Our bigs are freakin babies who let people four inches shorter outrebound them by double figures; our outside shooters have long since gouged out their eyes at the sight of Ammo; the refs are taking money from Clay Bennett; Kobe's getting old and useless and should be traded for Darren Collison while we still have the chance; we should have shipped Drew's injury-prone ass out for Kidd when we had the chance; Pau is a pussy, and we should have kept Marc and Kwame instead; Mitch Kupchak is an idiot; Phil is senile and should be replaced with Byron Scott ASAP; Lamar needs to go into candy rehab; our bench is the worst in NBA history; Voodoo Gods have cursed us with injuries; our team is older than the Celtics; we have lazy players; Kobe accidentally stepped on Brian Shaw's two-thousand-dollar Armani loafers; etc, etc... Did I get everything? (Seriously, tell me if I missed something. I wouldn't want to feel I wasn't doing my job.)

So, what's the conclusion of all these comments/fanposts thrown up in five minutes of alcohol-fueled desperation? The Lakers are going to lose in the first round, they'll be lucky to make it to seven games, this is the beginning of a long, slow, painful decline, Kobe's gonna retire, Brian Shaw is gonna kill us all... etc, etc. Sound about right?

Of course, that's only one side of the story, and what kind of writer would I be if I only examined one perspective? Click on for the other. 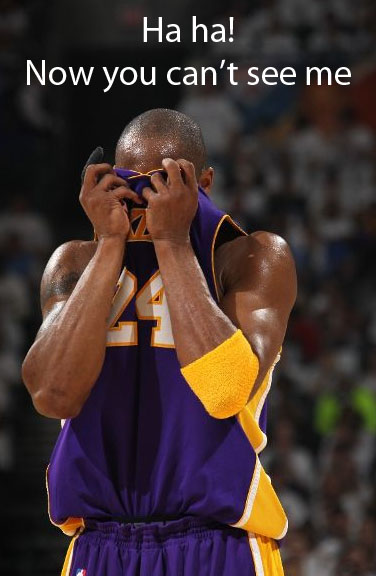 The other wing is preaching of how the Lakers are just so much better than the Thunder, how we're not gonna lose another game, how we're going to blow them out from here on out. Little or no reasoning is provided, it's just based on a gut feeling. This is fine, except many members of this wing are speaking in a tone that gives off the impression that they're implying the other group are stupid for even entertaining the notion the Lakers might lose, and even going as far as to ridicule people for trying to examine why the Lakers lost Games Three and Four. Confidence is fine, but some room for rational thought must be allowed. In fact, such overconfidence often suggests subconscious insecurity beneath the surface.

Basically, between these two groups, anarchy rules. Now, I'm not necessarily referring to Silver Screen and Roll, here, I'm just making more of a general statement about the state of Lakerdom around now. There are obviously level-headed fans amongst this, probably the majority, but a trait of level-headed fans is that they stay quiet. A good strategy, but not necessarily one that one must comply to, if they do not wish.

All that's asked is that you stay relatively calm, and are prepared to listen to and understand the viewpoints of others. Now, you folks have been pretty good on this note, but this is just a bit of an advance warning, in case we happen to go down in a series and shit hits the fan. 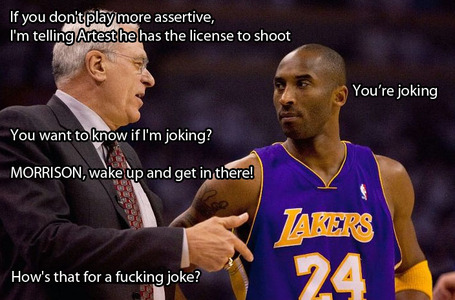 Onto the actual Lakers. Sure that last loss was the ugliest they'd faced since Game 6 in '08. But how did they bounce back from that fateful day? They dominated near every single meaningful matchup since, and went on to win the title. Sure their attitude nowadays does not mirror that of last year, but actions speak louder than words. Sure their actions have been doing little talking of late, but it is impossible to predict the future.

That's the crux of the matter. No matter what you think might happen, whichever school of thought you subscribe to, there's a good chance you're going to be wrong. And you have to bear that in mind whilst making predictions and labeling them as 'certainties'.

The Lakers' current level and style of play is pretty bafflingly atrocious, and they're tied 2-2. But, give Oklahoma credit. They've got a good team that is outhustling the Lakers to everything (hence their having series advantages in fast-break points, rebounds, blocks and steals). Sure, their crowd probably is scaring their refs into giving OKC the benefit of the whistle; kudos to the crowd. All-in-all, OKC is actually one of the better teams in the playoffs, certainly far better than the Bulls the Cavs have dropped a game to, or the Heat the Celtics have dropped a game to.

More worrying is the fact that the Lakers have said that they've been trying to turn it on, to get that attitude and swagger back, but it just hasn't translated to wins; and now their attitude is pretty.. stoned. Well, our worrying about it isn't going to change that, now, is it?

Now, let me draw some parallels with the last two NBA champions. The '09 Lakers vs. Rockets series. Remember that? 7 games. Random atrocious Laker efforts. Three losses against a team missing its two best players for the majority of the series. Hell, Los Angeles even lost Game One at home. A far from dominating performance. But they went on to win the title. And Kobe credited the wake-up-call of hard basketball from the Rockets as part of what got them ready for Finals-style basketball.

And the Celtics, those very same that beat us by 38 on our own home court. How did they get far enough to beat us by 38? Through two seven-game series with the likes of the Hawks and Cavaliers (neither of which back then was anywhere near a true contender) in the opening rounds. These series far from gave the Celtics the aura of invincibility their fans would have wanted. Hell, it even had many talking heads and ESPN pundits writing off the Celtics, and saying that the Lakers, with their far more dominant playoff performances to date, would take the Celtics in 5 or 6 without trouble. How'd that turn out, ey?

Of course, these are only two examples, and there are doubtless countless others with the exact opposite endings. I'm not saying that these two make it certain the Lakers will advance and win it all, or even highly likely, I'm just saying that the possibility is still there, backed up by very recent historic evidence. It could go either way.

The main root of all these worries is that the Lakers have not been anywhere near dominant throughout this series, and by extension, this season. Deep down, every fan wants dominant victories by their team to reassure them. Unfortunately, dominant victories don't come often. Since the '96 Bulls, no team has been truly dominant all season long, and even they had their issues. Hell, looking at the last bunch of champions, many of them did not win it all due to dominance, but simply due to luck and chance.

The Lakers were dealing with a half-strength Bynum last Finals, and had they not had HCA they would have likely lost. However, the one team that did have HCA against them was knocked out the round before; and they were only knocked out due to unlucky matchups. In 08, one may present a rather strong argument that if the Lakers had a healthy Bynum and Ariza, they would have beaten the Celtics and won it all. The Miami Heat, in 06, only won it all due to a superhuman performance by Wade (possibly with the help of whistles, but that's neither here nor there). The Spurs and Cavs may not have formed the '07 Finals if not for the #1-seed Dallas facing an atrocious matchup with the 'We Believe' Golden State Warriors.

Essentially, it's rare that the team who wins it all is the team pegged to win it all in October. Or January. Or April. It's not even a certainty at the start of June. Why? Because it's not the most dominant team that wins it all, it's simply the last man standing.

Thus, all the Lakers need do is survive. Take it one game at a time, survive each series, and see what awaits them the next.