Share All sharing options for: Lakers choke, and it depressingly isn't surprising

Okay, first some general notes on the game before I get into what I really want to talk about:

Now, on to the real issue: 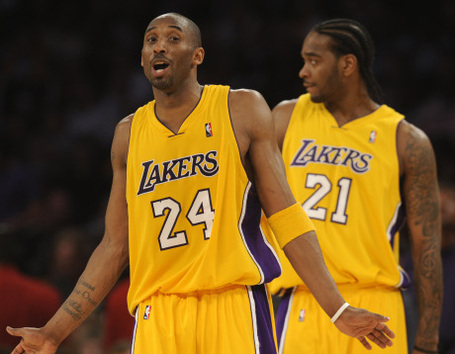 You want me to be plain and simple about it? The Lakers can't execute in the crunch. They panic, they flail. They fail. I remember at the beginning of the season, what seems a whole millennium ago now, the Lakers had a ridiculous record in close games, undefeated or close to it. Nowadays they're at best equally likely to win or lose. I honestly can't remember how much of that was due to crisp execution and a raise in effort as a team, and how much was simply Kobe's own heroics. But, it would be a fair assumption to state that they were better back then.

There are several reasons for this issue, and its deterioration over the season. The first to jump to mind is how Kobe has been rendered mortal by the basketball Gods. He simply can't turn it on nearly at will like he used to. Sometimes, like in the second quarter last night, he will get hot, but he can't control when it happens, and even when it does, it's not as dominant and dazzling of a performance as it used to be. Normally, one might think 'well, we're talented enough for other guys to step it up in his absence'. A nice thought, really.

Sadly, in reality, quite the opposite occurs, and the Lakers flail around like a Stinger missile that's lost its heat signature, moving aimlessly before falling to the Earth and destroying themselves. Last night, this sequence presented itself abnormally early, towards the end of the third quarter, and while the scoresheet still implied a close game, upon watching that macabre display, and knowing of the lack of resiliency present in this current incarnation of the Lakers, I switched off before the fourth quarter.

This sequence was essentially primarily three straight scores from OKC to close out the third. First, a sick Russell Westbrook dunk where he effortlessly stepped away from Fisher in semi-transition before going up for what initially seemed to be a lay-up, but ended up being the best dunk of this series so far. This was followed by a wide-open Harden three in transition, and then a contested Kevin Durant deep three which he drained with ice veins.

All these plays were in transition or semi-transition, and that last Durant shot was defended well, and just a great player making a great play. As such, defensively it was not as if it was a major breakdown or anything. We must instead turn our eyes in the direction of the element of the Lakers' game which has been a continual let-down over the season: the Los Angeles offense.

Now, I'm no professional by any means, but last I checked, the Lakers' primary offensive playbook is that of the Triangle, an offense that has won more rings than the three team captains put together. When executed well, it's poetry in motion. Now, the Lakers have had well-documented struggles in executing to even a mediocre level, but even at a mediocre level the Triangle is most certainly preferable to Derek Fisher winging it on the perimeter, jacking up bad long twos and threes.

The execution, as mentioned, was nonexistent, and the low post was not given a single look in this sequence, but more disturbing was the players' complete lack of presence of mind through this scenario.  The Oklahoma City Thunder were pushing the ball on every possession. This was because, 1. They were grabbing long rebounds, 2. They are a young team, and 3. They wanted to fire up the home crowd and thus feed off its energy. The Lakers had NONE of these factors in their favour, and yet still attempted to push the pace.

The Lakers no longer have the speed and athleticism to penetrate the paint in forced transition, and thus this attempt to push the pace led to pull-up 20-footers, which caromed off the rim back out to 15, 20 feet, thus allowing the Thunder to once again push the break and get easy scores. This cycle of bad offensive possessions was what allowed Oklahoma to score those 8 straight points to close the quarter. Even Durant's shot, was only made in a 'sense of the moment' zone.

The Lakers were scrambling all over the place, had literally no idea what they were doing, and once again categorically and completely failed to recognise their advantage in the post. The players with the ball had eyes only for the hoop (or, more likely, about half a foot off it, considering how bad they were missing), and failed to see their teammates. Their teammates did not help things by running around like headless chickens, completely blurring the lines of the offense to the point they were unrecognisable.
Some may argue that Phil should have called a timeout somewhere in this sequence, and try to get through to his team. But we've all been here long enough and watched enough Laker games to know it's not gonna freakin' happen. Phil has a unique way of coaching, and the record books seem to state that it works. Phil's showing trust in his players by leaving them out there without a timeout, and it's their responsibility to show that that trust was deserved.
And how did this sequence end? Lamar Odom dribbling out the clock, before trying a step-back three, which predictably clanged and gave a longish rebound, eliminating the opportunity for a put-back. Never mind that Lamar had his defender on his heels, just by standing there, and could have taken it to the hoop for the finish and/or the foul with minimal effort. Instead, he tried for the easy way out, the attempted highlight. This one offensive possession perfectly illustrates the Lakers' whole mentality and style throughout the last minute or so of the third.
It almost seemed as if the fact that Oklahoma City were still close enough to make a run and get back in it came as a surprise to them, that they were truly so cocky that they believed they had a safe lead and could blow it open at any time they chose. Their effort, mediocre after the first quarter, continued to deteriorate throughout the game, allowing the Thunder to stay in it. The Lakers appeared to feel that all they needed would be to turn it on for a couple of minutes, to go on a decent run, and the momentum and score would swing irreversibly in their favour. They seemed to believe that Oklahoma would not be capable of making a serious run of their own, and therefore the Lakers could cruise and wait till they felt like it to put this game out of reach. Hell, even Kobe, who's normally serious in such situations, was laughing and smiling with his defender, James Harden, when hitting three straight threes to quell an earlier Thunder run. 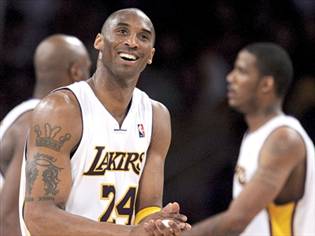 Reality must have come as an abrupt shock to them. Oklahoma City DID go on a serious run, and when the Lakers tried to flip the switch and hit big, quick-striking shots, they reached only to find that it had been so long since they had actually used the switch, that they had forgotten where it was. This arrogance and laziness from the Lakers, though present all of this season and much of last season, is always alarming.

I know Kobe was not on the floor at this point in time, but this was still unacceptable. This was the Los Angeles Lakers, an older team which has been to the Finals the last two seasons in a row, winning it all last year, against a young inexperienced squad that has less than 20 playoff games between the lot of them. How is it that THEY are the more composed ones?
Never mind this was a game that all odds suggested Los Angeles would lose, the game for right there for the Lakers till they choked it away.
The sad thing? This isn't a unique scenario, this is a trend. What that means has horrifying implications. 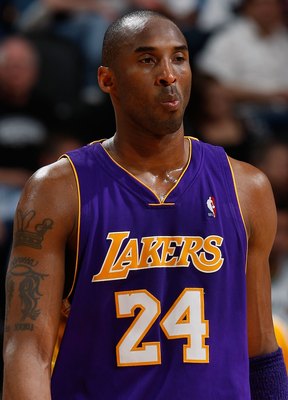