Kobe Bryant effectively lost Game 3 between the Los Angeles Lakers and the OKC Thunder, which ended with a score of 96-101.  The score was tied at 82 when Kobe spent three possessions trying to be a hero and challenging Kevin Durant, who is both bigger and more athletic than our ailing superstar.  The results were two ugly 3 pt misses and a blocked 16 foot fade-away.  On the other end, helped by the ability to run after all those long rebounds, the Thunder took advantage and scored 6 straight points (they would make it 8 straight after a Bynum missed hook shot), and the Lakers were never able to recover.

This is a team sport, so there's always more than one reason why a team lost, but Kobe's shot selection was definitely the driving force behind this particular L.  That said, if you came to see a good Kobe blast in the face of his poor 4th quarter performance, you'll be sadly disappointed.  Why am I giving him a pass?  Because we've just been so freshly reminded of what Kobe can do to close out a game positively, in game 2's victory.  And the difference between hero Kobe and goat Kobe is all in the results.

Much as we might not like how it manifests itself from time to time, Kobe is one of the best players in the history of the game in part because of his willingness to take tough shots in big moments.  This is hardly the first time he's tried to take a game over in the 4th quarter, and it's definitely not the first time he's failed to do so, either.  But we've been so freshly reminded of what Kobe is capable of, both good and bad, that I can't just sit here and blast him for the same stuff he was applauded for three nights ago.

In Game 2, Kobe was 4-8 from the field, and 7-9 from the FT line, en route to 15 of the 22 Lakers points in the 4th quarter.  It was a vintage performance, one that had everyone from Johnny Ludden to J.A. Adande screaming 'Not so fast' about all those "the demise of Kobe" story lines.  In Game 3, Kobe was 2-9 from the field, with no FTs, en route to 4 pts.  Two completely different results, creating two completely different outcomes.  But take a look at the shot charts. 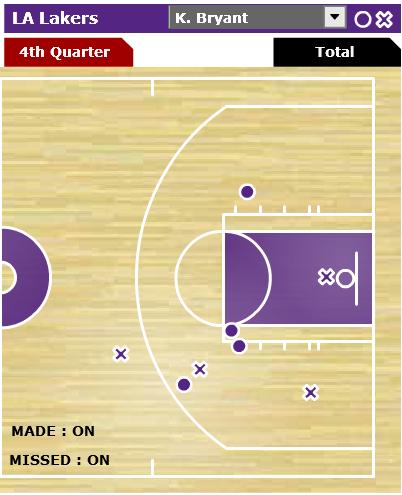 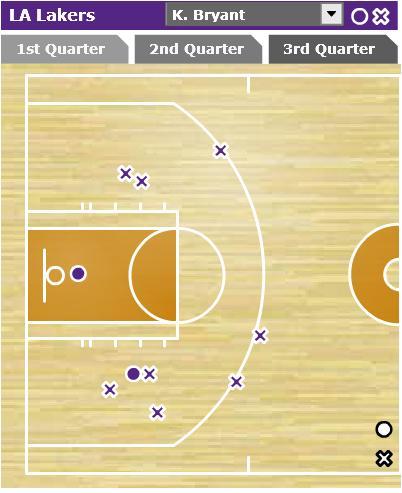 I don't know about you, but I don't see a whole lot of difference there, besides the obvious presence of a few more X's.  One major difference people will jump to point out between Game 2 and Game 3 is that in Game 2, Kobe shot 9 FTs, garnering 7 additional points.  Those FTs came mostly on closer shot attempts, so if those shot attempts were to show up in the Game 2 shot chart, distribution between the two charts would look a lot different.  It's a valid point, but Game 3 has it's counterpoint.  In Game 3, Kobe did not get to the foul line in the 4th quarter, but he did actually increase his role as a facilitator.  He had 3 assists in the 4th quarter of Game 3, as opposed to one in all of Game 2.  It stands to reason that his assists came off of drives towards the basket, in which the Thunder focused on him to prevent a repeat of Game 2.  So, in Game 2 he drove to the basket and got fouled, so the shot chart has no close shots.  In Game 3 he drove to the basket and was doubled, so he passed the ball to his teammates, so the shot chart has no close shots.  Perhaps he didn't take it to the basket as much as you would have liked in either game, but there weren't too many complaints after Game 2.

In fact, for what it's worth, Kobe actually did back off his attempts to win the game single handedly in Game 3, which is not something he's always done in the past.  We blame him, and rightfully so, for taking and missing those shots, and the Lakers couldn't recover from those 3 wasted possessions, because this was already a very tight contest, but we've all seen Kobe enter hero mode, never to return.  Last night, he did eventually realize a heroic ending wasn't in the cards, and went back to playing the distributor.  You can fault him for entering hero mode in the first place if you want, but hero mode and fail mode are not the same thing every night.

I'm not trying to make excuses for Bryant.  Blame for Game 3's loss falls predominantly on his shoulders.  But I've come to terms with the fact that Kobe is what he is.  The mentality he needs to provide us with some of the best moments in sports, the mentality that is the reason so many GMs would want Kobe to take the final shot in a ball game, is the mentality that allows the events of Game 3 to take place.  So far in his illustrious career, there have been more Game 2s than Game 3s, so the mentality is, partially at least, justified.

All I seek is consistency in the commentary regarding Kobe's game.  If you want to take him to task for Game 3, don't celebrate him for Game 2.  If you want to put him on a pedestal for Game 2, don't throw him under the bus for Game 3.  Kobe, the hero of Game 2, and Kobe, the goat of Game 3, are the same guy.  Your reaction to him is all that's different.