[Editor's note: this fine piece was written by my colleague Saurav Das. It's being posted under my name to get around some site-tech difficulties. Enjoy. ~DF]

So, 'tis the time of the season where talking heads spurt out their opinions on the highly subjective matters of year-end awards. While I personally believe these awards are pointless, as the entirety of the system is subjective and there exists no definitive criteria for these awards, many put great stock in them and they do look good on a resume. Now, I don't have a vote on any of these, as by some great failure of perception in the NBA office, they've failed to recognize my *ahem* greatness, and correctly value my opinion. However, I do have you readers at my beck and call, and feel I may as well waste your time with my analysis of the awards relevant to the Lakers, starting with the one our candidate has the greatest chance of achieving, the Defensive Player of the Year Award. (I feel this award is actually a slight against defense, as there is a DPoY award but no ‘OPoY' award, leading many the casual fan to believe the MVP is the ‘OPoY,' which is sadly generally the case).

To determine who is deserving of Defensive Player of the Year, we must first examine what makes a great defensive player. Is it the fundamentals? The stance? The athleticism? The mentality? The strength? The court awareness? General consensus would be that it is composed of a mixture of all these elements, as well as others. They key, however, is to determine the value of these elements in relation to each other, and to value each player's level of proficiency in each. No small task.

Many turn to stats in order to aid them in this arduous task. While defensive stats may provide some indicator of performance, they are still often fledgling and incomplete, and too subject to variables and misinterpretation to be reliable. Many crucial defensive stats are not even recorded in box scores (blocks and steals can have varying, even negative, values). As such, in addition to the fact that I am very old-school when it comes to basketball, particularly with defense, I shall mostly ignore stats and go off what I've actually seen of the players. In my own low-level basketball league, I view myself primarily as a defensive specialist, and thus can appreciate how much certain elements such as mentality can lead to good defense.

Now to look at the four primary candidates, as well as one darkhorse mention:

Ron-Ron is a possibly insane player. And that's his primary advantage defensively: his dog-like determination to stick to his man and make life as difficult as possible for his opposite number. He will give 100% on defense at all times, not resting while off-ball like many others are wont to do, but instead forcing his man out of position and making cuts difficult, therefore disrupting opposition offensive flow.

Ron is so crazily determined defensively, he even gets into ‘defensive rhythms,' like great offensive players get into offensively, and can change a game as effectively with his defense as players like Kobe, Melo and LeBron can do with their offense.

Physically, his primary attribute is obviously his strength. He, along with Melo and LeBron, is one of the strongest perimeter players in the game, and a nightmare for opponents. He pushes people out of their preferred spots with his body, blocks passing and cutting lanes, and plain outmuscles opponents at every possible opportunity, frustrating them in the process.

While his strength leads to him being abnormally large for a wing, he still possesses good quickness (freakish, taking into account his size), and can stay with his man effectively. While at 30 he has obviously lost a step from his youth, he is still fast enough to even defend the occasional point guard. 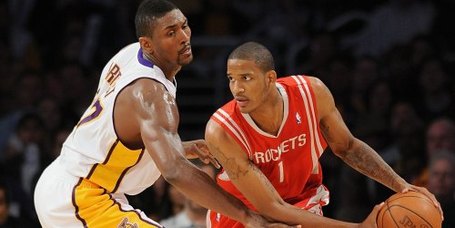 While at the beginning of the season people were talking about how he has a bad tendency to overplay on his man to the point it detracts from overall team defense, and how Ariza was a better team-defender than Artest, at this point it's blatantly obvious that that was a fallacy. Artest is a deflection MACHINE, and alters countless passes every game, complementing his straight man-to-man strips; and can make an opposing team nervous to pass the ball.

The one main detractor from his case is his defensive mediocrity at the beginning of the season, where both plantar fasciitis and his weight were causing him to be abnormally slow, allowing offensive players to blow by him. However, Ron soon countered this by dropping 20 pounds and then proceeded to have a positively RIDICULOUS defensive stretch where he held some of the best wings in the league far below their regular productivity.

At the same time, his main plus is how he changed the Lakers as a team. He took them from being an excellent offensive team and good defensive team to being a great defensive team (1st in the League for much of the first half of the season, till their recent mediocrity). He made them a more physical team, and gave them the ability to grind it out and win games with their defense, which was previously a rarity.

Artest has a decent chance, but most likely his relative craptitude at the beginning of the season, in addition to the Lakers' team defensive struggles of late, will probably cost him the award. Still, it warrants remembering that Artest is one of the greatest perimeter defenders of all time, in the Pippen-Payton-Bowen stratosphere.

The Thunder are one of the best defensive teams in the league this year, after being one of the worst last year. Thabo is their defensive specialist. Playing at the 2-guard position, he gets the start over No. 4 draft pick James Harden solely for his defense.

With a good stance, exceptionally long arms and quickness, Thabo has the base of skills to be a great defender. His excellent nose for the ball and knowledge of how to position himself in defensive situations only add to the package. The icing on the cake is his recognition of his role as a defensive specialist, and his embrace of it. 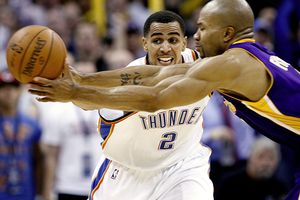 He has had excellent defense against the stars of the league, admirably defending the likes of Kobe, Wade, Roy, and even the larger LeBrons and Melos of the world. As well as this, he is OKC's day-to-day defensive lynchpin, and does a good job of it.

Unfortunately for him, Oklahoma City still has far too little of a reputation, and not enough media exposure for Thabo to get serious recognition of his defensive prowess and a legit shot at the award.

I don't really need to give much of an explanation here. 6'11", probably strong enough to lift an Abrams and gifted with an unnatural vertical, Dwight Howard dominates the league in terms of blocked shots and rebounds, as well as altering countless shots. His quickness also makes him a passable defender of the screen and roll, and further aids him in his help defense.

Opposing players are constantly in fear of him, many will hesitate to drive into the paint for the fear the next second the ball will somehow be in the 12th row. Hell, even on jumpshots, many offensive players will glance around nervously, hoping Dwight isn't about to come bearing down upon them with some gargantuan block. Highlight reel plays are actually Dwight's main strength defensively, as they intimidate the opposition, causing them to hesitate or alter countless shots every game. 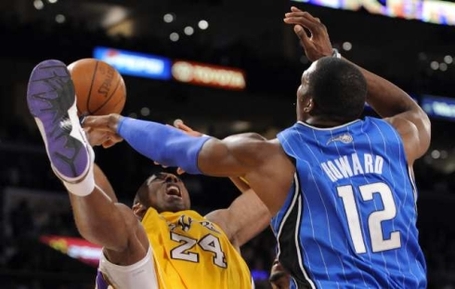 Strongest to Dwight's case is the fact that Orlando has been among the top-ranked defensive teams in the league two years in a row. All this while trotting out a 3 (Rashard Lewis) masquerading at the 4 position, a tough but not particularly talented player at the three in Matt Barnes, a lazy player in Vince Carter, and a still-recovering-from-injury point guard who was never that special defensively anyway in their starting lineup; as well as giving substantial minutes to defensive nonentities such as Ryan Anderson and Jason Williams. Some may argue that this is due to an outstanding defensive scheme. But what's their defensive scheme, really? Funnel these fools to Dwight, and watch the fireworks. ‘Nuff said.

All this, plus his insane defensive stats, plus his rep, pretty much guarantee Dwight a repeat at the Defensive Player of the Year award.

He's a bit short, not particularly physically gifted, and was considered expendable by Detroit. Didn't stop him from morphing into a defensive force in Denver. While he does not have the reputation as a day-to-day game-altering defensive specialist as some others have, he has still played great defense against many of the stars in this league.

He's played better defense on Kobe than any player I've seen since Bruce Bowen, simply by maintaining a good stance, not falling for fakes, and sticking with Kobe through his plethora of moves. He's also played what Mike Breen (though it could have been Jeff Van Gundy), I believe, once stated as being ‘the best defense I've ever seen anyone play on LeBron James.' 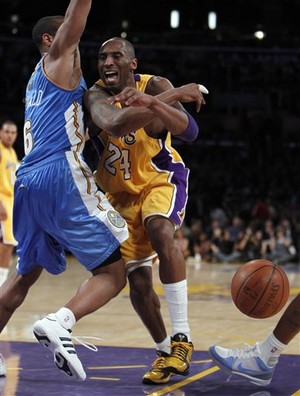 He's a great fundamental defensive player, but not exactly ‘outstanding' on a day to day basis, nor does he provide the highlights or defensive stats that others on this list do, and as such his chances of winning DPoY are less than those of anyone else before him on this list.

Let me make this clear: Kobe Bryant does not deserve this award. He has not put enough effort in defensively, and far too often plays off his man, even when being lit up for far too many points. His ‘free safety' method of defense was working OK earlier in the season, where he was averaging unreal steals numbers, but has been a detriment of late.

True, with Ron Artest also on his team, it's very rare Kobe is called upon to defend a dangerous offensive player, so a dropoff in effort is somewhat understandable. Still, when players are dropping CAREER HIGHS on you, you'd think you'd decide to wake up and play defense instead of continuing to play six feet off excellent shooters.

The reason he stills warrants a mention, however, is that when he IS motivated, when he DOES feel like playing lockdown defense, the results are ridiculous, and his defense in these instances far better than anyone on this list except maybe Ron Artest at his best. (Even Ron Artest's comparative lack of quickness put him behind an at-his-best Kobe Bryant.) 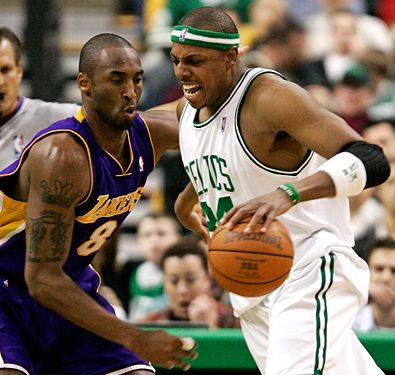 An excellent fundamental defensive stance, good quickness, great hands. A ‘this motherfucker is not beating me' attitude. A good ability to keep a man from getting to his spots, and denying him the ball. An encyclopedic knowledge of opponent tendencies, and an uncanny ability to find the counter to them. A freakish ability to cut off all angles, forcing a player into huddling scared over the ball.

While such displays of defense are becoming rarer and rarer, they are still almost godlike when they do occur and in themselves reason enough to mention Kobe on this list.