In order to repeat as champions, Los Angeles Lakers might need a little luck

Share All sharing options for: In order to repeat as champions, Los Angeles Lakers might need a little luck

Last night's loss to the New Orleans Hornets was more troubling to me than the debacle against the OKC Thunder a few nights back.  Why?  For one, the Hornets are not nearly on the same level as the Thunder, even with Chris Paul.  Second, contrary to what you might hear elsewhere (where every Lakers loss is due to a lack of effort), the Lakers actually tried last night.  They wanted that win, they put energy into the game, and still came up short.  I know what it looks like when the Lakers slack, and that wasn't it.  Their energy didn't translate to smart play , it didn't correlate with improved focus (as the defense was routinely rotated and scrambled all over the damn place), but it wasn't a lack of trying that lost this game.

What lost the game is what has plagued the Lakers all season long, and the one thing they absolutely must fix before the playoffs.  The Lakers need to shoot the ball better from the outside in order to repeat.  The problem is, they have no control over whether that will happen or not.

The defensive blueprint against the Lakers has been formulating all season long, and it's now as clear as the water on a remote tropical island.  It goes something like this:

Step 1 - Apply token pressure to the ball handler on the perimeter.

Step 2 - When ball gets passed into the post (or to Kobe), shade the entire team towards the paint (or towards Kobe) to make sure the player with the ball has nowhere to go, and there are no cutting lanes to the basket available.

Step 3 - When the ball gets passed out to the perimeter, close out slowly (if at all) and dare the Lakers to shoot from the outside.

Step 4 - Build a house with the Laker bricks.

It's that simple.  It doesn't always work.  Sometimes the Lakers will make their outside shots, and then you lose.  But, if your team is clearly on the inferior end of the talent spectrum vs. the Lakers (as 9 out of 10 NBA teams are), this strategy gives you the best opportunity to beat them.

It worked for the Hornets.  Last night, the Lakers shot 7-29 on three point shots, but that's not the bad news.  The bad news is that nearly every one of those three pointers was a good shot.  Within the confines of the offense, after good ball movement, and either uncontested or open enough that the New Orleans close out wasn't anywhere near the shot.  Of the 29, I would estimate that 25 of them were shots that resulted from decent execution of the offense, and yet the Lakers only managed to hit 7.  Less than 25%.  Most notable was Ron Artest, who went 1-8.  Artest is shooting 26% from 3 pt range in the month of March.  And he's still a hair's breadth away from being the BEST 3 pt shooter on the team on the season as a whole (.04 behind Jordan Farmar, and no, Luke Walton and Josh Powell don't count). 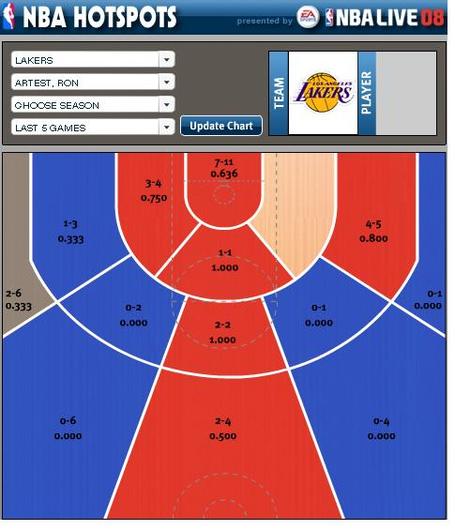 That's bad news, friends.  The coaching staff can talk all they want about making a consistent effort to get the ball inside, but at some point, the Lakers need to do exactly what they did against New Orleans.  When the offense is clearly sagging to the middle and giving you the outside shot, you have to take it.  Except that you also have to make it, and the Lakers don't seem to be capable of it right now.  Hell, you could effectively defend the Lakers by replacing opposing players with bamboo sticks (assuming the sticks were tall enough to deter inside shooting).  The Lakers can't even punish inanimate objects for slow rotations.

I'm not one for bold proclamations, but I feel pretty comfortable with this one:  If the Lakers are to repeat as champions, they need better than 13% combined 3 pt shooting from Artest and Derek Fisher.  They need better than 30% 3 pt shooting from those two players in order to repeat.  The Lakers need for opponents to not feel comfortable just letting the perimeter players chuck.  This isn't about a comfort with the Triangle anymore.  If the point of the triangle is to get open shots, Artest was plenty comfortable last night.  What he wasn't was effective.

Now, just in case I got you all bothered about the fact that the Lakers need improved performance in an area where they can't affect their own performance, let me remind you that there is a precedent for this.  It's not unthinkable for the Lakers to get improved shooting in the playoffs.  This is where the luck comes in.  Just because the Lakers can't decide to shoot better, doesn't mean they won't start shooting better.  Shooting is a funny thing.  It can be contagious, both good and bad.  It is entirely within the realm of possibility for the Lakers to get back to their average in outside shooting (which isn't great, but may be enough of an improvement to see them through, depending on how dominant they can be on the defensive end).  It's even possible the Lakers will get hot at the right time.  It's happened before.  One need look no further than last year's championship run.

As the Lakers "waltzed" their way to the 2009 championship, no less than 3 players went on ridiculous hot streaks compared to their season averages.  Trevor Ariza shot 48% from 3 in the playoffs vs. 32% in the regular season (that's 4% less than Ron Artest, even as Ron Artest "struggles to fit the offense", Mr. Plaschke).  Lamar Odom shot 51% in the playoffs vs. 32% in the regular season.  And Shannon Brown shot 48% in the playoffs vs... umm, well he shot 67% for the Lakers in the regular season, but that was a very small sample size, and he was shooting 29% for Charlotte (in the games that he managed to get in to).  3 players who all shot poorly during the season, but got hot at the right time.  Without any one of them, the Lakers may not win the title.  OK, so they could probably have still won it without Shannon, but the other two were pivotal.  The Lakers were lucky en route to championship #15.  (Note: This does not mean the Lakers would not have won if they weren't lucky, that is an unprovable argument either way, it simply means they were lucky as they won.)

Am I happy that the Lakers championship hopes hinge on improvement of an area that is just as likely controlled by fate as by the players' force of will?  Not at all.  The Lakers have not shot the ball well this season, and the month of March has seen them missing fish in a barrel.  But until we have full and final proof otherwise, there is always hope.   And shooting does have a funny way of regressing to the mean.  Right now, the Lakers are way, way below the mean.  Let's hope that regression kicks in at just the right time.