Not that we should be worried or anything, but Kobe Bryant can't shoot

Share All sharing options for: Not that we should be worried or anything, but Kobe Bryant can't shoot

It's been 5 games since Kobe Bryant returned from a lengthy layoff to rest maladies to his ankle and finger. The Lakers have gone 4-1 over that stretch, with good wins against Denver and @ Memphis, and only a close loss @ Dallas keeping them from a spotless run of form. The return of Kobe is undoubtedly a good thing, even though you'll recall the Lakers also went 4-1 without him, including some impressive wins against good teams. He opens up the offense because other teams are forced to key on him defensively, and he's one of the best defenders in the league when his heart is in it. The only problem is he can't shoot to save his life.

Here's Kobe's Hotspots breakdown of the past 5 games. It's … ugly. Kobe is shooting only 42% since returning from injury. The adjusted FG% (accounting for 3 pointers being worth more) is only marginally better at 45%. Thanks to small sample size, there are some regions of the floor that he's done well from, but overall, from every distance except in close, Kobe is throwing up some ugliness. 36% from 6-15 feet, 40% from 15-23 feet, and a lovely 21% from 3 pt range. Even at the rim, he's below his season average. And if we take out his one decent shooting game, the heroic return to defeat the Memphis Grizzlies with 32 points on 13-19 shooting, including two (of the 3 total this 5 game stretch) big three pointers, the picture is even bleaker. Over the past 4 games, Kobe's shooting percetage is 34%. 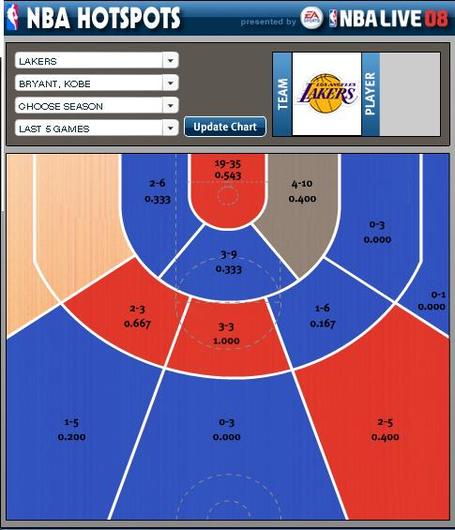 So what's wrong with the Mamba? He's not taking an inordinate amount of bad shots. In fact, the hot spots tells it all here. More than 2/3 of his shots have come within 15 feet. No one could accuse him of shooting too much either, he's had a pedestrian (for Kobe anyways) 18 shots a game since his return. Is the broken finger getting worse? Seems unlikely, considering he just sat 5 games and saw his team do alright without him. He's no longer in Ironman mode, and it's just plain stupid to spend all that time getting your body right only to come back and ignore it again.

That's not to say the finger isn't an issue, because it has to be. I don't think that Kobe's injured finger is getting worse, but I do think his ability to play with the finger decreased during his layoff. Keep in mind, Kobe had to make changes to his entire shooting motion because of that little digit. He's forced to grip the ball differently, causing changes in speed, release point, etc (I could go into further detail, but it would just get all physics-y). It's the type of thing that few players in the game could deal with on the fly like Kobe has. So why is Kobe having so much trouble re-adapting after the layoff?

I have a theory. I think the explanation is muscle memory. The ability to shoot a basketball is drilled into you through years and years of practice, and it's not drilled into your head. The motion of it, where to release the ball, the strength to put into the shot, these all become nothing but instinct if you've practiced shooting enough. Your muscles simply know what to do. I know this from personal experience, but a more relevant anecdote to you fine readers is a story from Chris Ballard's "The Art of a Beautiful Game", which I recently reviewed. In it, the author challenges Steve Kerr to a shooting compeition, 3 point contest from college and pro range style. Kerr, who says he hasn't shot the ball in 6 months, destroys Ballard and puts up numbers that would have won this year's All-Star competition. Steve Kerr is one of the better shooters in the history of the game, but the point is still valid. Your body never forgets how to shoot.

Which brings us back to Kobe. When Kobe first injured his finger, he had to spend a fair amount of time praticing how to shoot with the injury. He was literally fighting his own instincts and muscle memory with every shot he took. It's a testament to both Kobe's willpower and ability that he was able to remain even relatively successful. But now, after 3 weeks off, his body has forgotten the most recent lessons, and gone back to the shooting instincts that Kobe has honed for 30 years. He will have to re-learn whatever he was doing pre-layoff in order to continue to be successful shooting the ball.

Or he could just be in a slump. It's happened to Kobe before, and it will happen again, as it does to every NBA player, except maybe Steve Nash. If he is just in a slump, give the man some credit for doing two things not normally synonomous with a slumping Kobe Bryant; he hasn't tried to shoot his way out of it (see above regarding less than 18 shots/game), and he's been a very good distibutor, averaging just a hair under 7 assists in the past 5 games, including 12 against Denver. Further, even if Kobe is struggling mightily with his shot, no coach in the NBA is going to think they don't have to focus on Kobe defensively because of the slump.

Either way, it's not something to be overly concerned about. We've all been on the Kobe bandwagon long enough to know how this story ends. One of two things will happen; Kobe will either get better, or he will get worse. In the next few games, Kobe will either start shooting well above average (otherwise known as regression to the mean), or continue to struggle until the Lakers will lose (or almost lose vs. a bad opponent) a game in which Kobe's poor shooting was a major factor. Then, angry with himself, Kobe will lock himself away in a gym, practice shooting for 5 hours straight, and the next night he'll score 35 on 20 shots, and we'll all be able to move on. It will become just another example of the greatness and determination of Kobe Bean Bryant.