The Lakers Are a Threat to Your Threedom

Share All sharing options for: The Lakers Are a Threat to Your Threedom

Next stop on the Lakers' inspection tour of possible first-round opponents: Oklahoma City. Tonight's game against the Thunder, who are sixth in the Western Conference but only a game away from eighth, will be followed directly by tomorrow's against the Houston Rockets. It'll be the second time this season the Lakers have played exactly this back-to-back. In early November, they won in OKC and Houston in a 27-hour span. Both games went to overtime, and the combined margin of victory was four points. As road back-to-backs go, this is a touch more challenging than that swing through Oakland and Sacramento last week.

Before we sink our teefs into the forthcoming matchups, allow me a moment to unpack a statistical observation or two. The regular season is getting late enough that the numbers are starting to solidify. Enough games have gone by to generate pretty dependable stats to inform how we think of teams in the big picture. I'm not going to attempt a full analysis of the Lakers' season numbers, or anything like it. (Not now at least.) Today I just want to cast light on one team metric that I've been tracking this year and find especially interesting.

I speak of three-point shooting accuracy (3PT%) by the Lakers' opponents. Last year, the Lakers were third in the NBA in opponents' 3PT% at 34.5%. Heading into the season, I was curious to see how that would hold up. Turns out, it's holding up just fine. As I'm sure you've heard mentioned, the Lakers are first in the NBA in 3PT% allowed. They've been in the lead position pretty much wire-to-wire. I don't think folks really appreciate, however, exactly how good the Lakers' three-point D has been.

So far this season, the Lakers are allowing opponents to make 32.5% of their threes. The next best mark is held by Charlotte, at 33.8%, a full 1.3 percentage points higher. That's about the same-sized gap as there is between the 2nd-place Bobcats and the 15th-place Bulls. The Lakers' mark this year, moreover, is a full two percentage points better than last year's.

As a league, for whatever reason, the NBA is making fewer threes this season. NBA shooters collectively have made 35.3% of their longballs, down from 36.7% last year. So some of the Lakers' improvement is, if it helps to think about it this way, the product of the current shooting environment. To a degree, they're just riding the downside of the wave. Only to a degree, though. To get at how much improvement is team-specific, we need to measure the Lakers' three-point D relative to league averages.

In 2008-09, the Lakers' 3PT% allowed was 2.2 percentage points better than the average; this year, it's 2.8 percentage points better. If you're a bit more statistically inclined, we can express it in standard deviations. Last year, the Lakers' 3PT% allowed was 1.67 standard deviations better than the mean. This year, it's an incredible 2.12 standard deevs better. Given the number of three-point attempts the Lakers allow, the improvement has been worth about 30 points this season. Running it through the Pythagorean wins formula, that's one extra win.

One whole extra win! Just from improving three-point defense from "very good" to "outstanding." I assume Bill Plaschke will read the preceding four paragraphs and reconsider how Ron Artest has affected the Laker D.

Catching Up With the Thunder

Thrice this season have the Lakers and Thunder played, and thrice have the Lakers won. It's been a while, though. Last time these teams faced each other was on December 22nd, when the Lakers knocked OKC below 0.500, to 13-14. Since then, the Thunder have been on a sweet run. They've won 30 of their last 43 games and improved their per-game point differential from +1.2 to +3.4. The key has been a significantly improved offense. They've always brought it on D. Boosting their offense from sub-mediocrity into the NBA's middle class has made them a real troublemaker. All this, while still being the league's youngest team.

You know the deal with Kevin Durant. He's barreling into the exclusive tier of plausible first-team All-NBA candidates. The MVP talk is silly, but don't blame him for it. He is teh awesome. If Artest can summon another masterpiece of man-to-man D, the odds will swing heavily toward the Lakers. He's had pretty decent success against Durant this season. Ron likes to test him physically, bumping him and making him work. Durant generally gets his points against the Lakers, but Ron forces him to burn a lot of possessions in the process. 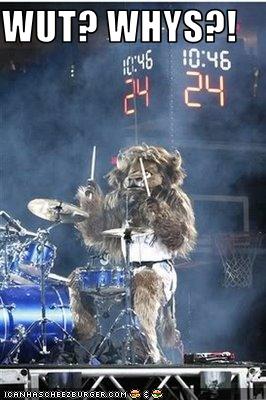 Just thinking about Derek Fisher trying to guard Russell Westbrook is making me tense and cranky. It's going to be awful. On the Point-Guard Athleticism Scale, these two are at polar opposites. The only question is how bad Phil Jackson will let the situation get before he parks Fish on the pine. There aren't many formidable offensive threats beyond Durant and Big Westy. The Thunder suffer from a paucity of outside shooting - they're one of the few playoff teams who shoot threes worse than the Lakers - though the recent return of James Harden from injury helps.

Some announcer you hear tonight will describe the Ford Center as having a "playoff-like atmosphere." The Thunder usually draw an enthused crowd, as do the Lakers when they're on the road. It should be a close, high-energy game. That both teams' strengths are on defense suggests it'll be a low-scoring one as well.

Catching Up With the Rockets

Life isn't so grand in Rocketland these days. Once a fringey playoff contender, they've fallen off the pace and are lottery-bound. With last night's loss (...to the Clippers... at home) Houston has dropped three straight. Their team defense, which was outstanding last year with Ron and Yao Ming on the court, is now definitively average. The attempt to use Trevor Ariza as a featured offensive player isn't working out, and injuries have made everything worse.

But does anyone think the Rockets won't give the Lakers a tight game? Especially when the game's in Houston, they are always a pain in the ass. I'm half-convinced you could take a dozen SS&R commenters, run them out there in Houston Rockets gear, and the Lakers would still win by only three. There's witchcraft at work when these teams play. 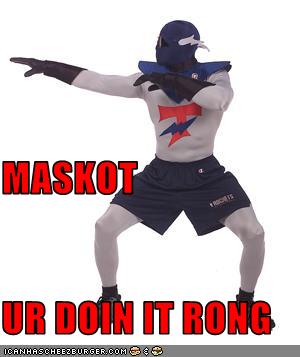 Oh hey, look - it's another offensively talented point guard! Ugh. Aaron Brooks. For a guy who's not exactly in the uppermost ranks of NBA point guards, he torments the Lakers a whole damn lot. I have no reason to believe that won't continue tomorrow night. Brooks may be without his preferred backcourt compadre, Kevin Martin, who missed last night's game with a sore shoulder. Chase Budinger would start for him instead. Behind Brooks on the depth chart is Kyle Lowry, who would be the Lakers' best guard by a healthy margin.

Other injuries: Shane Battier, out. That means Ariza is guarding Kobe Bryant. Also, New York throwaways Jared Jeffries and Jordan Hill have minor wounds and are day-to-day. To help plug the holes, Houston has called Mike Harris up from the Rio Grande Valley Vipers. Harris is a 6'6" "comboish forward" who put up some great scoring and rebounding numbers in the D League. I always like watching these guys who are trying to stick in The Show.

What are the odds of a back-to-back sweep? I put it at 50-50. Tonight the Lakers might be considered a slight underdog, and if they do win, there's letdown potential tomorrow. Dropping both games would be a huge step backward.