The Road Trip: It Begins

Share All sharing options for: The Road Trip: It Begins

Let's chat about first-round playoff opponents, shall we? The Lakers, in all likelihood, will christen their postseason title defense across the prow of either the Trail Blazers, the Thunder or the Spurs. All three of those teams make an appearance on the Lakers' remaining regular-season schedule. The Spurs will appear twice, starting tonight in San Antonio.

Before the season started, the Spurs were on the short list of plausible contenders to knock the Lakers off the Western Conference throne. It hasn't really worked out that way. (If it had, we wouldn't be talking about facing them in the first round.) A 9-9 start kind of shunted them out of the spotlight, and hot stretches of play from the Nuggets, Mavs and Jazz have rendered the Spurs a less-than-fashionable playoff pick. The dreaded "window has closed" phraseology has crept into discussions about the team.

It's striking, then, to look at the numbers and see how their underlying performance is in many ways no worse this year than last, and in some ways better. Their net point differential per game has improved from +3.8 last season to +4.8 today. Last year they outscored opponents by 4.5 points per 100 possessions; that number's up to 5.2. They're even a bit younger than they were a year ago. In 2008-09, San Antonio had an Effective Age (i.e., a playing time-weighted average of their players' ages) of 30.4 years. That's down to 29.3, which still makes them the third-oldest team in the NBA but is a step in the preferred direction.

(The Lakers, if you're wondering, have an Effective Age this season of 28.9 years, seventh-oldest in the league and up substantially from 27.4 last year. A hearty thanks to Kevin Pelton of Basketball Prospectus for these numbers.)

The problem for San Antonio is that last season they outpaced their Pythagorean win projection by two wins: they won 54 games despite the point differential of a 52-win team. The bounces bounced their way. You can usually count on such a divergence to rectify itself at least somewhat year to year, and indeed, for the Spurs reversion to the mean has been a stone bitch. Their actual record lags their Pythagorean pace by several wins. 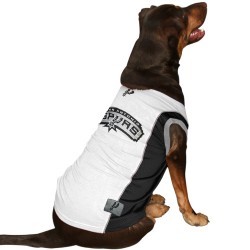 These two teams split their first two head-to-head contests this season. On January 12th at the AT&T Center, the Spurs blasted the Lakers by 20. Pau Gasol didn't play, and Kobe Bryant left the game early with back spasms. Not a fun night. On February 8th, the Spurs visited Staples to face a Lakers team shorn by injury of both Kobe and Andrew Bynum. In one of the more surprising outcomes of the year, the Lakers won comfortably. Pau was great against Tim Duncan, and the makeshift Laker attack exploited the fast break against their draggy elder opponents.

Since then, and despite how most everyone is down on this team, the Spurs have played remarkably well. They're 9-3 in the month of March. (Granted, they lost in that stretch to the Cavs, Magic and Hawks, the only really elite teams they faced.) This, despite Tony Parker, that all-too-frequent tormentor of Derek Fisher, missing the last nine games with a broken right hand. (He won't play tonight.) The Spurs have survived, and even thrived, in his absence through the capable fill-in work of George Hill and terrific play from Manu Ginobili. When the Lakers hosted San Antonio in early February, Manu had a usage rate of 23.5 and a PER of 17.8. His usage has now stepped up to 24.6 and his PER has spiked to 22.1, an incredible improvement. It has more than offset some modest backsliding from Roger Mason, Jr. and, of way more importance, Tim Duncan.

It's clearly benefits the Lakers not to have to think about Parker tonight. Watching Fish try to guard him is just uncomfortable for everyone. Parker also makes the Spurs defense substantially better. Per 100 possessions, they allow three points fewer when he's on the court. Hill is solid. The Lakers will have to be mindful of him, especially on the pick and roll. But he doesn't have Parker's handle or explosiveness in getting into the lane.

From the Lakers' standpoint, if you have to play without Bynum, the Spurs aren't the worst team to play against. Drew, as we know, can be a mess defending the P&R. Pau has shown that his quickness and length can frustrate Duncan. You'd probably prefer a Pau-Odom frontline anyway, as Lamar Odom is well suited to guard both the Antonio McDyess midrange game and Matt Bonner's threes.

The question we're all pondering is whether the Lakers will use this road trip to start waking up from nap time. I can't entirely blame them for dozing a bit during their whistle-stop tour through the NBA's bottom caste. Those games were muy depressing. But these next five include some inhospitable opponents, and the outcomes will either put to rest or amplify plenty of questions bubbling around the team. It's getting about time to get one's act together.