Up Next: A Double Serving of West Coast Scrubbery

Share All sharing options for: Up Next: A Double Serving of West Coast Scrubbery

I don't know if you've heard, but there are NBA teams in California aside from the Lakers. It's easy enough to overlook them. Collectively the Los Angeles Clippers, Golden State Warriors and Sacramento Kings are as much a source of California pride as O.J. Simpson or the state's credit rating. It's possible those three franchises exist solely to supply the Lakers with short road trips and easy wins. I'm told the league is one great conspiracy to ensure Laker championships, so I guess I'd be naïve to doubt this hypothesis.

Tonight and tomorrow, the Lakers get to snack on these tasty treats. First up in Oakland are the Golden State Warriors, followed by a visit to the state capital to face the Kings. A pair of easy wins, right? Right. I mean... probably? No, not really. I think we know by now that these are the circumstances under which the Lakers' attention starts to wander, which means one or both of these games will be closer than we'd like. The Kings especially tend to annoy by not actually rolling over when they're supposed to. I wish they'd stop that.

The Lakers are three games behind Cleveland and three games ahead of Denver. That's likely how they'll finish the regular season, trailing the Cavs for the NBA's best record but with home-court advantage against everyone else. A key, though, is snagging the easy victories that are left on the schedule. Orlando is playing some good ball, even with the loss to Charlotte yesterday, and sits only two games back of the Lake Show. Securing HCA over as many playoff opponents as possible means playing up to expectations against the league's downtrodden.

Catching Up With the Warriors

At this point in the season, the Warriors are a pseudo-D League team. That's not me being snarky. Half of their guys getting regular minutes were called up from the D League. These include starting center Anthony Tolliver, reserves C.J. Watson and Chris Hunter and their latest addition, forward Reggie Williams. I'm looking forward to seeing Williams play. He was brought up a couple weeks ago from the Sioux Falls Skyforce, much to the joy of our sister site, Ridiculous Upside. RU has a good profile of Williams here. He led the NCAA in scoring twice at Virginia Military Institute and has been shooting well so far in the NBA.

Last time the Lakers faced the Dubs was on February 16th on Staples. Neither Kobe Bryant nor Monta Ellis participated. The Lakers prevailed, 104 to 94, behind a career night from Shannon Brown, who had 27 points, 10 rebounds and a single turnover. They held the Warriors to 0.91 points per possession but struggled to put the game away thanks to some horrid shooting. Kobe will play tonight, as will Monta. Neither part of that sentence is necessarily good news for Golden State. 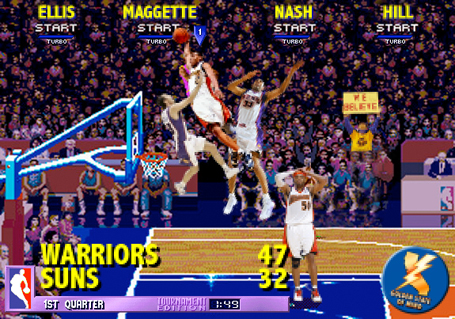 Ellis has a famous name and a high per-game scoring average, but those points come at great cost. His True Shooting percentage is 51.9%, which is below average for league shooting guards. He turns the ball over on more than 12% of the possessions he uses, a rate that scrapes the bottom of SG rankings. Per 100 possessions, the Warriors have been 1.3 points better with him off the court.

Monta does, however, make it hard for the Lakers to hide Derek Fisher on defense. Kobe, in all likelihood, will be assigned to check Ellis, leaving Fish to "guard" Stephen Curry. That's obviously a disastrous matchup. To a young buck like Curry, Fish isn't much more than a traffic cone. Luckily, the Dubs have no inside post scorers to receive passes at the rim on the drive-and-dish. Tolliver is a Channing Frye type, and Hunter is a limited offensive player.

On D, the Warriors are an excrescence. They rank at or near the bottom of the league in four or five key defensive metrics. Andrew Bynum had a strong game (21 points on 75% True Shooting) the last time these teams played. The way he's been getting position and going to the rim lately, he could have a season-high in points tonight. I'll be irritated if he doesn't get at least 15 shot attempts.

Catching Up With the Kings

Here we have a slightly more daunting opponent. Unlike Golden State, the Kings appear to be exerting a little effort. At the trade deadline, they added Carl Landry, a guy that's often given the Lakers fits. Twice this year they've played the Lakers tight: first in the double-overtime game in Sacramento on December 26th, and then on January 1st, when this happened.

Heh. My favorite part was when the shot went in.

The Kings have been OK since the Landry trade. Not world-beaters, but OK. They've notched wins against Utah and Houston to go alongside losses to the Clips and Detroit. This is a team already playing for next year, or maybe even 2011-12. They've got good young assets they need to supplement, and they've got the cap space to do it.

For now it's very much the Tyreke Evans show. The soon-to-be Rookie of the Year had his first career triple-double on Wednesday against the Raptors. He didn't play when the Kings visited Staples in January. In the December contest, he had a poor game, shooting 9 for 23 with five turnovers. I suspect the Ron Artest will be asked to guard Reke, as the Kings don't have any other elite scoring wing. That matchup, should it come to pass, will be delish.

Like the Warriors, the Kings have some pretty significant shortcomings on D. They don't force turnovers, or get a hand in your face, or rebound especially well. They're... well, they're not good. Even having played the night before against a fast-paced Golden State team, there's no excuse for the Lakers not to take this one. Much better days await for this franchise, but until the youngsters mature a bit and free-agent reinforcements arrive, the Kings are still win-padding fodder for the only California team that matters.