Share All sharing options for: Tonight the Lakers Head South by Southwest

Well, look who hasn't disappeared down the lottery hole. It's the Phoenix Suns, who despite surrendering headline space to sexier Western Conference teams are still chugging toward the playoffs. On January 26, they lost at home to Charlotte to fall to 26-21. It was their 8th loss in 11 games, and it looked at that point as if they were ready to pack it up, trade Amare Stoudemire for whatever they could get and call it a season. Surprise, surprise: they've instead gone 14-4 since then. Amare's still on the payroll, and Phoenix is in a de facto tie for the fifth seed in the West. That's some nice work.

Tonight they welcome the Los Angeles Lakers to US Airways Center. As you've probably heard, the Lakers have been stanky bad on the road lately. In calendar year 2010, they've lost 11 of 19 away from Staples. Their last road win was on Kobe Bryant's dagger three in Memphis in his first game back from injury. How long ago does that feel?

After the Lakers lost in Orlando on Sunday, Kobe praised his team's effort and said, "we just lost to a good ballclub. It's as simple as that." True enough, but the Lakers are reaching a point at which A's for effort aren't going to work. The Dallas Mavericks are only 2½ games back with a series of chumpy opponents on tap. To hold them off for the conference's top record, the Lakers need to start winning road games. Not just competing in them, but winning.

This will be the fourth meeting of the season between the Lakers and Suns. The first three went to the home team: early on, the Lakers rolled twice at Staples and then lost big in Phoenix on December 28. That game was pretty nasty. Kobe shot well and scored 34 points, but the team didn't defend at all. The Suns posted an eFG of 56% and scored 1.22 points per possession in a 15-point rout.

They're still basically the same team you remember from back then. They lead the league in offensive efficiency with an operating principle of Shoot Threes, Make Threes, Play Fast. They're still near the bottom of the league in defensive efficiency, although they've improved their D just a touch by giving big minutes to Robin Lopez. He's been a decent anchor in the middle and is one of the league's most improved players. The Suns still aren't a good defensive team, but having Lopez in there seems to help. 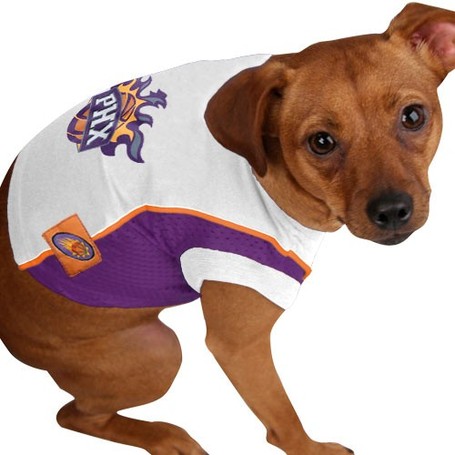 He's likely to play 30 or more minutes tonight, as the Suns' other center, Channing Frye, is expected to play zero minutes. He's suspended for throwing a punch against the Pacers on Saturday. That's a break for the Lakers. Frye's one of Phoenix's best three-point shooters and gives them badly needed height, if not bulk, in the paint. Otherwise the Suns should be at full strength. Leandro Barbosa and Goran Dragic both have minor injuries but will probably go.

Defensively the Lakers have to cover and close out on shooters. They did a ghastly job of this against Miami last week and again in the first half against Toronto. If the Lakers - including Kobe, who really cannot roam against this team - get lazy defending the perimeter, Phoenix will shoot them full of holes. This means guarding against the three, but not just the three. In the three games so far this year, Amare has worked that free throw-line jumper against Andrew Bynum. One hopes the active, energetic Drew that made Chris Bosh's life troublesome will show up tonight.

On offense the Lakers, as usual, have the inside advantage. Drew has had big scoring games against the Suns and should be the tip of the spear tonight. If he can get Lopez in some foul trouble, the Lakers could dominate at the rim. With Frye sidelined, Phoenix has little frontcourt depth. Also: three pointers? If the Lakers feel like making a few of those tonight - you know, just as a change of pace - that would be nice.

The Suns are a good home team that's playing well. The Lakers are a mediocre road team that's playing lost. Vegas lists the Suns as 1½ point underdogs, but that's the Laker brand name talking. Under the circumstances, Phoenix deserves to be favored.