Meditations on Denver as an Imaginable Playoff Opponent

Share All sharing options for: Meditations on Denver as an Imaginable Playoff Opponent

A conference finals clash with the Denver Nuggets is starting to feel inevitable to me. It's not, as you know, actually inevitable. It's maybe not even likely. If the Nuggets meet the Lakers in the playoffs, it could just as easily happen in the second round. But the way these teams come together on the court, how their respective strengths and weirdnesses alchemize into quality ballage, has my brain contemplating Denver's emergence as the chief in-conference foil for the latter-day Lakers.

In current Laker cosmology, Denver might occupy an orbit similar to how the early- to mid-80s Milwaukee Bucks circled the Bird-era Celtics. That is, as a customary late-playoff opponent just good enough to give you a fright but not good enough to beat you. A more or less worthy adversary that history eventually forgets because who ever cares who loses in the conference finals.

Denver's alignment of talent is concerning in some respects. As we saw again yesterday in the Lakers' 95 to 89 win, the Lakers don't have the point guards to keep up with Chauncey Billups and Ty Lawson. Derek Fisher trying to defend either one of them is a tasteless joke, and Jordan Farmar, though significantly better, isn't likely to get 30 minutes a game no matter how much he deserves it. In last year's playoffs this wasn't as much a problem because Denver used the appalling Anthony Carter as Chauncey's backup. Lawson shrinks the starter-to-bench dropoff, if he doesn't erase it completely. It was a little stroke of luck, probably not decisive but an advantage all the same, that he could play only six minutes yesterday because of his shoulder injury.

Count me among those who've become genuinely impressed with how Arron Afflalo defends Kobe Bryant. He's still another major upgrade from the May 2009 edition of the Nuggets. Back then George Karl ran Dahntay Jones and J.R. Smith at the Kobester. Afflalo is much stronger and more disciplined. He keeps his feet underneath him and is admirably resistant to Kobe's head fakes. A few good efforts does not a Kobe-Stopper make, but Afflalo's a guy Karl can assign to Mamba Duty with confidence that he won't embarrass himself or require frequent double-team help. That's a nice asset.

The big-man matchups these days are largely the same as in 2009. One thing that Nene is really good at, I've increasingly noticed, is sliding into the gaps of the Laker defense when Andrew Bynum and Pau Gasol leave to contain penetration. He does this thing where he lurks almost literally behind the basket until his guy wanders off, and then quickly makes himself available for the dumpoff. He and Billups can do a lot of damage that way. Thankfully, the Nuggets seem to forget about that option for stretches. Long stretches that commonly entail a great many J.R. Smith and Kenyon Martin jump shots. 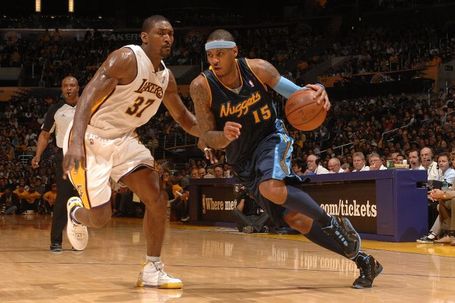 The Lakers have made some improvements of their own, natch. I mean.... Ron Artest, man. Ron Motherfucking Artest! On its own, it's easy enough to appreciate his defensive dominance yesterday. But when you remember how Trevor Ariza got muscled so often by Carmelo Anthony last May, you appreciate Ron's skill set all the more. That's not meant as an insult to Trevor; he's just not the grappling streetfighter that Ron is, and it's the latter quality that's imperative against the Nuggets. Guarding Carmelo requires someone who can anchor, who can stall his drives and post-ups with gravitas.

What comforts me most about Denver as a future playoff opponent is their collective glass jaw. They play with verve and intelligence when the bell goes off, but they're bad at taking a counterpunch. In this they're the inverse of the Lakers. The Lakers play on even keel, which is alternately infuriating and reassuring. When you want them to go Hulk Mode and pummel an opponent into dust, they seem to relent. But when we fans are panicking, they keep their heads about them. It's absolutely a Phil Jackson-transmitted character trait.

The Nuggets are more easily toppled off their equilibrium. When the Lakers throw a run at them, they tend to break their offense. They foul more. They start double-teaming Kobe, which never works. They don't have the Lakers' in-game stability and commitment to system.

The Nuggets are that drunk-ass belligerent at the bar, the one who's been there since 2:00 in the afternoon and is looking to take offense at whatever you say. Yeah, you have to keep your head on a swivel around him. He's likely to take some wild swings and one or two might connect. But with a coolheaded approach and decent aim with your punches, it needn't be more than a forgettable skirmish.