Who's ready for some more score-settling? After embarrassing the Trail Blazers on Saturday night in Portland, the Lakers now confront the San Antonio Spurs. Their longtime Western Conference foils smashed them by 20 a month ago. The teams will play thrice more this regular season, the first rematch unfolding tonight back at Staples.

It's unknown whether Kobe Bryant or Andrew Bynum will take part. Kobe, who missed the Portland game with a strained left ankle and a wealth of other body parts in need of healing, is listed as "day to day," meaning "who the hell knows." It sounds as though the team will leave it up to the Kobester. Sayeth Phil Jackson:

I would say it's day to day. We have an opportunity here [where] it's two days [off] before the All-Star break and there's some time there if he does need to take a longer time. We'll try to give him that liberty to do that if he has to.

I don't know that he has to, but I've gone on record as favoring some extended Kobe R&R. As for Bynum, the Lakers list him as "more doubtful." This leads me to expect we'll see the Lakers starting Derek Fisher, Shannon Brown (who matches up well with San Antonio SG George Hill), Ron Artest, Lamar Odom and Pau Gasol.

These aren't the awesomest of times for the Spurs. Since beating the Lakers on January 12th they're 6-7, and they've lost two of their last four games. They haven't looked bad for significant stretches, just more like a team that's running in place. Conjecture abounds that they're considering a bid for Amare Stoudamire.

When the teams last played, the Spurs used clean ball movement and on-target jumpshooting to blast the Lakers' D. Since then Hill has replaced the execrable Keith Bogans in the starting lineup. Otherwise, this is the same Spurs' look and system that Phil's had to deal with for years. No surprises lurk in their X's and O's. The challenge, as always, will be for the Lakers to match their efficiency and burliness. 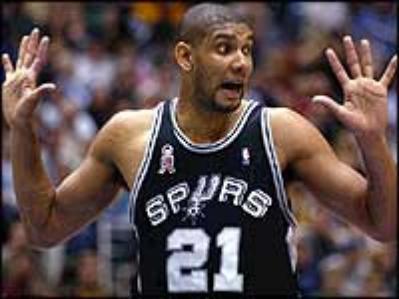 Tony Parker is the type of point guard to give Laker fans chills and hallucinations. Fish, we all know, can't guard him, and if he lets Parker knife into the lane a whole bunch, the defensive structure will collapse. Maybe Shannon gets a shot at checking him? He seems to be the Lakers' best hope. In any case, a repeat of the Billups/Lawson catastrophe of last week is sadly possible.

Even if Bynum's out, which seems quite likely, the Lakers should hold their own on the front line. Assuming, of course, that Gasol rediscovers the zing that he's been missing. (The Lakers didn't practice yesterday in the hopes of rejuicing their legs.) It assumes as well that Odom delivers something in the neighborhood of the greatness we saw in Portland. No assumption necessary when it comes to Artest v. Richard Jefferson. Ron clearly owns that matchup.

What the absence of Kobe and Drew would mean defensively is that the Lakers could find themselves size-deficient at times. For instance, if Gregg Popovich puts Manu Ginobili on the floor with Jefferson, McDyess and Duncan, Phil would need to reach deep into the bench to find equivalent height. Luke Walton hasn't played much lately, but both he and Josh Powell might see more action tonight. 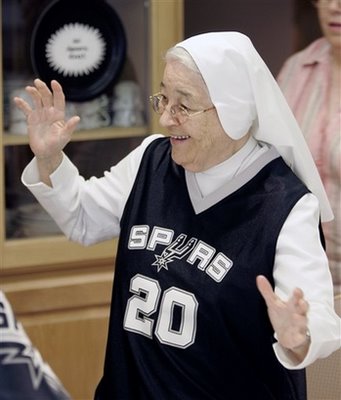 The Spurs are nearing the midpoint of their three week-long rodeo trip. They shouldn't, however, be terribly road-weary. They played the Clippers at Staples on Saturday and have been in Los Angeles since early Friday morning.

Even with their ailments and casualties, this is a winnable game for the Lake Show. Odom and Gasol will both need to produce, and someone from the Brown-Jordan Farmar-Sasha Vujacic trio will need to be on. The circle-the-wagons adrenaline that fueled them against the Blazers isn't going to be the same tonight, so the Lakers will need to make up for it with smarts and attention to scheme.

Only a few more days until the All-Star break! That's just enough time to enjoy a Vengeance Win or two.