See, Kobe? That wasn't so hard, was it? You're entitled to a night off every now and then, especially when you've enough injuries to qualify for disability in several states. Those teammates you've got? They're good. Most of them are, I mean. They can be counted on not to load their pants on the rare occasion you're not around to rescue them.

I know your heart's been in the right place. You get paid to play basketball, and that's what you want to do. Totes laudable. If all the world had your professionalism and tenacity, it would run a hell of a lot better than it does. It goes without saying that you live for the approval of Silver Screen and Roll authors, so please rest assured that you have it from now until the Rapture.

(Or until you retire and start making commercials for San Manuel Indian Bingo and Casino.)

It's now time for you to do it again. Keep resting. Keep healing. Kick your dogs up and sip on Frescas until after the All-Star break. I say this not because the Lakers don't need you, but because they do. They need you, healthy, when the playoffs come calling. Gutting it out at 70% for a few weeks in winter is one thing. Pulling the same trick in May or June is another, far riskier maneuver. To get you to ring numero five, the Lakers will require that you be operating at or near full capacity.

That's been true all along, of course. What's changed in recent days is the importance of the Lakers' regular-season games, the ones you've been painfully forcing yourself through. That's to say, they've become relatively less consequential, and not anywhere close to important enough to risk your playoff health over.

On January 14th, the Lakers led the Cleveland Cavaliers by a game in the standings. Home-court advantage throughout the playoffs was in play between the two teams. Killing yourself to maintain that edge I can understand. The Cavs are your likely Finals opponents, and when Game One tips off on a certain Sunday in June, you'll want to be in your own building. It's a tangible objective that justifies certain risks.

I hate to say it, but that carrot is no longer realistically within reach. Since the night of January 14th, the Cavaliers have won all 11 of their games, while the Lakers have gone a very good but relatively quotidian 9-4. The Cavs lead the Lakers by two games plus a tiebreaker. To secure home-court advantage, L.A. would have to outperform Cleveland by three games over the last 30. That's technically feasible but not likely. Keep in mind that there are no head-to-head games left between the teams, and that so far the Cavs have played more road games than home. 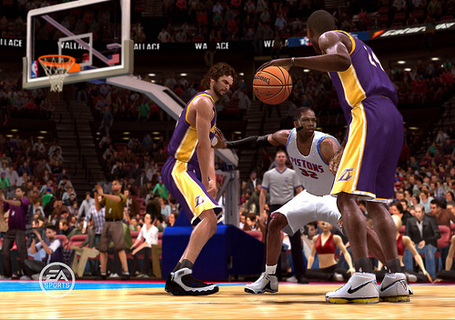 Likewise in the key of What would be the point?, nobody's in a good position to challenge the Lakers for HCA in the Western Conference. Denver is 4½ games back, Utah 6½. Even if you, Kobe Bryant, missed the entire rest of the regular season, the Lakers would still likely finish with home court. Just taking the next two off - which plus the ASB would give you 10 full days of restage - doesn't even more the probability needle.

And think of the salutary effects it could have. Lamar Odom and Ron Artest get a bigger role in the offense and a chance to keep their flow going. Andrew Bynum and Pau Gasol would have to step up, shorn as they'd be of their Kobe is shooting too much excuses. And Sasha Vujacic would get more shots and time to rediscover his.... you know what, maybe forget that last one.

The point is, there's a straightforward risk-reward calculus up in here. In terms of anything that matters, taking the next week or so off is basically costless. You'll feel better, we'll feel better, and your teammates might find their swag a bit. You know it's the right thing to do.

Turn in your badge and gun, and we'll have them polished and ready for you on February 16th.