Share All sharing options for: Ah, the good old Northwest...

Hi everyone, this is my first front-page post, so it's definitely gonna be a little different.

Well, I'm Saurav, one of the new authors C.A. mentioned in his last post, and I volunteered for the job, and this preview.

I guess I should introduce myself, but I don't really know what to say, so I'll let my writing do the job for me.

Now, down to business..

Well, everyone, enjoy your break? Enjoy your day away from this nightmare that is the Lakers' schedule of late? I damn well hope so, cos we're right back into the fire with this back-to-back. Denver and Portland, both teams with at least 30 wins, both playoff teams in the Western Conference. Ah, good times..

Oh, and let's not forget that we haven't won in the Rose Garden since Dinosaurs walked the Earth, and that Denver hates us, and anything less than a 40-point blowout will fail to keep those Denver fans who happen to be Laker Haters (relatively) quiet. What fun. 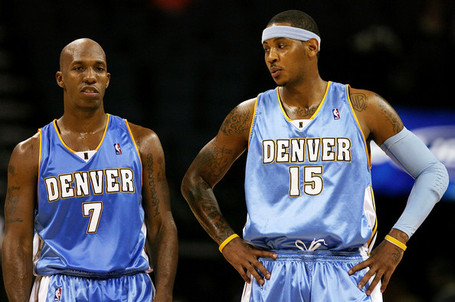 Even with just one of those guys, they're tough.


The number two team in the Western Conference, the Denver Nuggets are a legitimate force (in fact, record-wise, they're better than that team in green we seemed so pumped about beating, and equal to that team we beat in the Finals last year). Denver's MVP candidate, and offensive dynamo and 29.7ppg-man Carmelo Anthony is most likely out for this game, as said by the horse's mouth; but even without him they're above .500, and them playing without him is likely to lead to us letting our guard down some while Denver add even more motivation to play well in addition to their hatred of us - a dangerous combination. Plus, one could definitely pose the argument that Chauncey is more of their leader than Melo - you only need to compare their record without Chauncey to their record without Melo.

Honestly, I love Denver's play style. They're tough, physical, and play with a lot of heart. They could cut that 'the world is against us' and 'we're the best team in the West' crap, but they use that as motivation, so you can't really blame them (feel free to be annoyed at their antics, though I prefer being bemused). However, everything I love about their play style makes me dread playing them - they're exactly the sort of team that can just outwork and out-muscle us to win games. We need to step up to the plate ready to bat, for this one.

Statistically, they get to the free throw line a LOT, they lead the league at around .40 FTAs per Field Goal attempted - a ridiculous number (for every 10 shots they attempt, they shoot 4 free throws, it's crazy). The Lakers need to make sure they don't help them pad their stats in this regard; to play good defense without fouling. Drew especially needs to stay out of foul trouble, as that's really the main (only?) way to take him out of the game; and we need him to match their physicality. 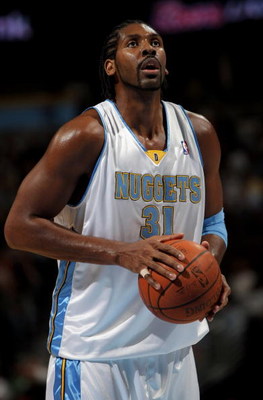 Expect to see this a lot.

Speaking of our bigs, Pau needs to step up and start balling again - this isn't the EuroLeague, mate. Over his last three games, he's shot under 50% and averaged 11.3 points and 7.3 boards. Not only that, but he's looked out-of-rhythm, nervous and weak on the court. He's called out for more shots, and he has to step up and show he deserves it, as his recent play simply won't cut it against Denver. Of particular interest is how he handles their bigs' swagger and physicality. 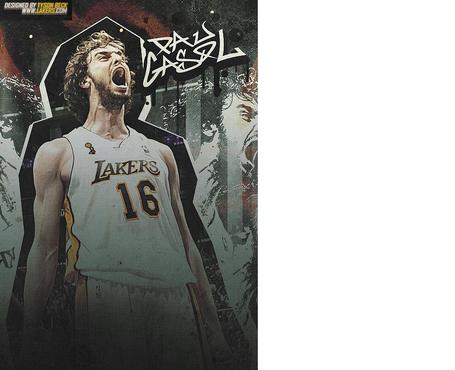 Where's this dude at?


Asides from Denver's frontline, their only real option left is Chauncey, considering Melo is likely out. No way we leave Fisher on him, and Farmar's too small; so either heavy minutes for Shanwow (I reckon we should call him Brown Sugar, imo. Shanwow is so unoriginal); or put Kobe or even Artest on him. Starting at two-guard is likely Aaron Afflalo, who is not much offensively but has done a good job frustrating Kobe with his defense in the past. With Melo out, Joey Graham is starting at wing; which should mean Kobe gets him and plays the 'free safety' role.


Ty Lawson can be a nightmare, but he can't single-handedly carry the team, and Farmar's good play of late should see him getting plenty of minutes, particularly against Ty Lawson (I don't care how many rings Phil has, if he puts Fisher on Ty he needs to get his head checked) Of course, they've still got some dude named Earl coming off the Bench. When he's hot, he can light up the scoreboard and is virtually unstoppable, but he's in a slump right now. If he breaks out of his slump against us, we can't stop him, so all we can do is pray he doesn't (keeping him away from the ball just might be a good idea, too).

Denver has a very good offense, primarily due to their exceptional three-point shooting, 37.5%, good enough for third in the league. However, we are the best team in the League at defending the three, and should make that a focus tonight.


Matchup-wise, we've got no-one who has an easy night offensively, really; so the whole team will have to bring a balanced attack, which we should be doing anyway so it's all good.. I hope. Run the Triangle, play out of the post, and match their physicality without fouling... am I asking for too much?

Really, guys, is that so complex to run? 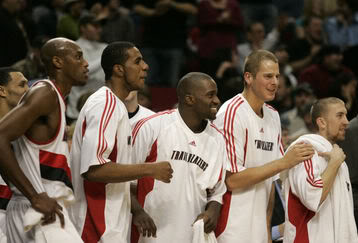 Odds are, at least half these guys won't be playing.

Ah, the good old Rose Garden... this post is already longer than most of Dex's or C.A.'s previews, so I'm tempted to just say we're gonna lose and leave it at that. But, seriously, if we ever wanna break this losing streak there, now is the time, it's impossible to keep up with the Blazers' injuries and I'm not sure who'll be starting on the day; but it's safe to say they'll not be at full strength. However, the way we're playing right now and playing them in the middle of this rough patch of the schedule, on the second half of a seriously tough back-to-back, beating them would be tough. Exactly why we should START PLAYING LIKE THE FREAKING LAKERS WHO DID THIS and win the goddamn game. 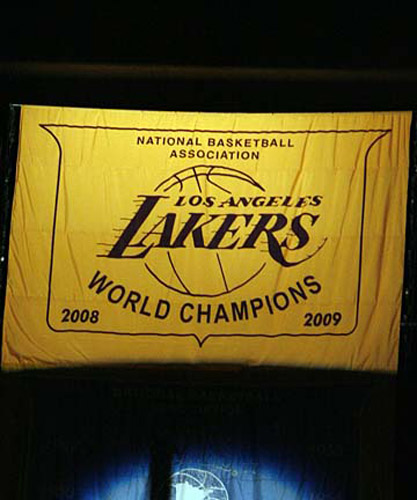 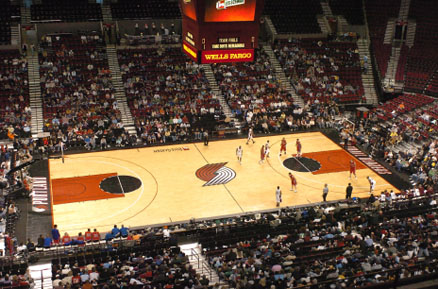 Look, to be frank, with Portland's injuries, there is NO way they should legimately beat us. There is no way Bynum and Pau don't go for 20/10 each; no way we don't win by 20, Rose Garden or no. Of course, that is assuming we play like we should be, like we played against Dallas when we blew them out. Especially considering our injury situation has gotten better and is infinitely better than Portland's, we have NO excuse for dropping this game - there is no curse unless you believe there is a curse. 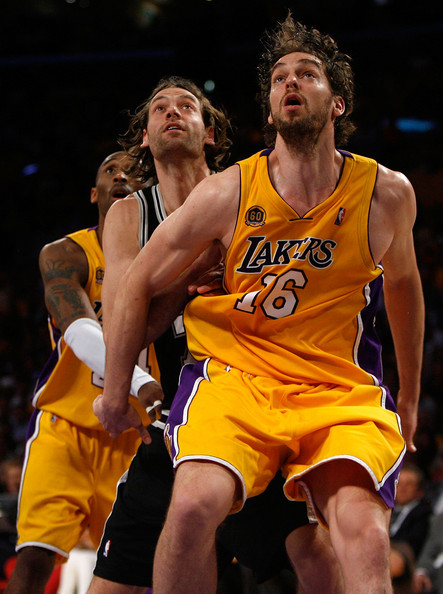 Ah, it looks so deceptively simple..

As for lineups, Webster, Miller and LaMarcus are healthy from their top 5. Oden is out for the season, as we know, and Roy missed last game and no definitive word on whether he's playing Saturday, far as I know. If Roy is out, they'll be starting Andre Miller and Jerryd Bayless in the backcourt. Miller has been very quiet of late, asides from his 52-point outburst against Dallas (just a bit of an oxymoron, there), scoring around 10 points and getting nearly 6 dimes a game in the last 4 games excluding Dallas. He's a good point guard, but not exceptionally fast, and Fisher shouldn't be any more of a liability than normal against him. Bayless has got speed, and has been playing well of late asides from an ugly 0-3 performance against San Antonio last game. This backcourt doesn't have a single three ball between them, so play off of them as much as you want, and go under screens, particularly on Bayless.

Webster is a solid player, but Artest should handle him no problems. Starting at center is the reanimated corpse of Juwan Howard (who's actually played surprisingly well, considering his scenario); he's no match for Bynum and Bynum should play like it. LMA, however, is BEASTING it of late, with an average of 27.5/12.5/4 for his last two games, against players like Duncan and Boozer, no slouches themselves. The onus is on Pau and Lamar to make sure the same doesn't happen to them. 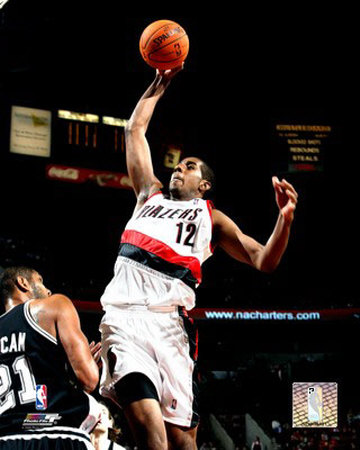 This man must be stopped!


Defensively, it shall be interesting to see how they handle Kobe and Artest - Bayless is too small to defend either, so whoever has him needs to park their rear in the post. Off the bench, they're solid from the 1-3, with Steve Blake, Patty Mills, Rudy Fernandez, and Nic Batum riding the pine. Their frontline, however, is dangerously thin. Hopefully Pau can find his mojo against them, if Denver didn't already bring out the inner PAU-er. If Bynum has less than a 20/12, he needs to slap himself repeatedly; and Odom should play a good game, against the likes of Jeff Pendergraph.


After this, we have two more very tough games against San Antonio and Utah before the All Star break finally comes round, and it's essential to win at least three of the next 4; and four would send everyone a message that we can still step up when needed, so I definitely won't be happy with anything less than an undefeated record from here until the All-Star break; which I believe is Strength-Of-Schedule wise, the hardest 4-game strech we've played this season; and possibly the toughest ANY team has played this season. What was that talk about the NBA favouring us with a soft schedule, again?

Run our offense, don't force shots, move the ball, control the pace, take care of the ball, rebound, and play defense. Play like a team. It's basketball, guys. Play it, and we win. Both games. 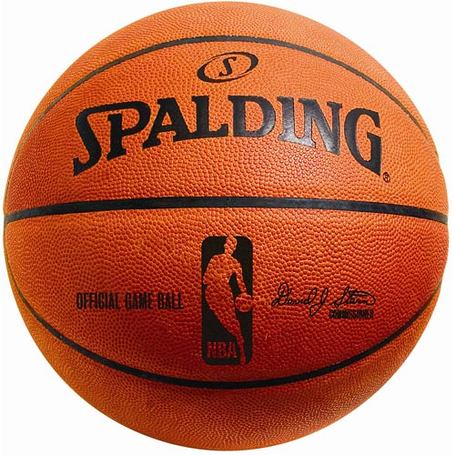 Play this. I think.

And, finally, our stats; courtesy of his honour, Dexter Fishmore:


League rank is indicated in parentheses. All numbers are courtesy of Basketball Reference and HoopData.