Two weeks remain until the NBA's trade deadline. If you're at all a transactions junkie, enjoy this time while it lasts. Once the deadline has come and gone, all we get to speculate and sling bullshit about are 10-day contracts and P.J. Brown-type veteran buyouts. Me, I'm going to bathe in the rumor swamp until malaria sets in.

The Lakers themselves have so far been pretty quiet. A little too quiet, if you ask Mike Bresnahan of the Los Angeles Times. He got a hold of Mitch Kupchak and, in an article published this morning, blew the lid off the team's deadline plans with the following bombshell.

There is no compelling reason to dramatically change this team, in particular its core," Lakers General Manager Mitch Kupchak said. "We won a championship last year and we feel like we can be as strong this year with the one change we made - the Ron Artest change.   If this is the team we go into the playoffs with, we'll be happy with our roster, provided we stay healthy. The caveat, as always, is we'll look at roster flexibility and areas where we can tweak the roster.

From this explosive admission, Mr. Bresnahan concludes that a big trade is "unlikely" and that "Chris Bosh will not be wearing a Lakers uniform this month despite persistent rumors." Hmm. OK.

It could very well be that the Lakers don't make a major trade this season. That's the likely outcome for basically every franchise in the league. Significant midseason swaps are rare and involve only a few teams each season, so you'll never go broke betting against their happening.

I don't think, however, we should expect Kupchak to say anything in advance of the deadline beyond anodyne double-speak, nor that the quote printed in the Times at all should change our guesstimatizing. For one thing, it's riddled with assumptions and qualifiers. If this is the team we go into the playoffs with.... the caveat, as always.... we'll look at roster flexibility.... To the extent the team even values candor in its public disclosures about possible deals, they've covered themselves eleventy ways from Sunday. Mitch used 80 words to say essentially nothing, a rhetorical skill that I envy and approve of.

If there's anything the Lakers have demonstrated over the past few years, it's the value of saying zilch. One of our sexy commenters, I apologize for not remember which one, pointed out recently that all of the Lakers' recent big roster moves have come out of nowhere. The Pau Gasol trade caught the entire world by surprise. So, a bit less dramatically, did the Ron Artest signing. Even the Morrison/Brown/Radmanovic trade happened with none of the usual advance chatter. 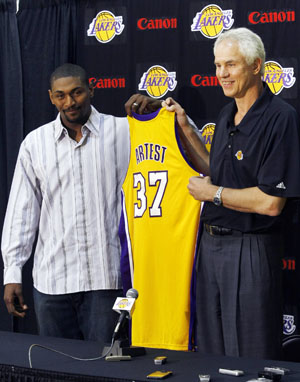 Mitch and Jerry Buss know that there's nothing to be gained from speaking up. Earlier this week in a retrospective on the Gasol deal, Bresnahan himself quoted Kupchak as saying:

We ended up working late into the night. My feeling was if we didn't get it done that night, it would probably hit the papers because the rumors would get out. When things hit the wire and it's now a public issue, it's kind of like all bets are off. I felt like if it's not going to happen that night, then it's going to fall apart.

That's revealing, not to mention sound negotiation on Mitch's part. If you're looking to deal or deal for a player, leaking the news is only going to move the asset price against you and, in all likelihood, piss off the team you're working with. 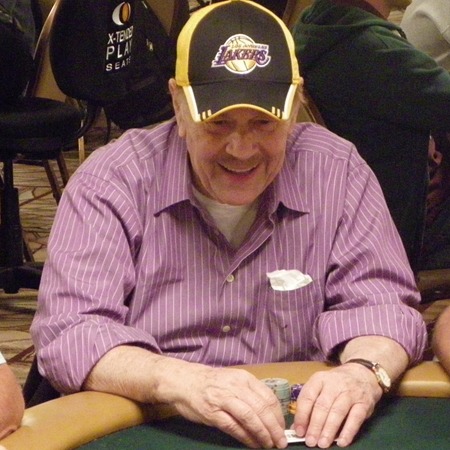 The Lakers also know how to bluff and misdirect. Remember this past summer, during the Lamar Odom negotiations? Those were simpler times, better times.

Yeah, not really. They were annoying as hell. But there was that fun moment when Jerry Buss pulled a contract offer from Lamar and "broke off all negotiations." Oh noes! Not for a microsecond was it credible that the Lakers weren't amenable to re-signing Lamar. They didn't have any good replacement for him, nor any way of obtaining one. Some moves are so obvious ly in your best interests that you make them regardless of previously issued sound-bites.

Such would be the case for any deal that brings in Devin Harris without breaking up the Laker core. If it were ever really on the table, Kupchak would accept the trade, hang up the phone and start air-guitaring inside 10 seconds. The same might be true of a Bynum-for-Bosh deal. So much mutual gain do the teams stand to realize that I won't completely dismiss it until the deadline comes and goes.

The point being, if you're the type of person who enjoys inventing and arguing about imaginary trades (*raises hand*), don't feel guilty about it. Don't let Mitch Kupchak and Mike Bresnahan rob you of that pleasure. Follow that passion of yours. The Laker front office is busy doing the same, whether they admit it or not.