In Future, Video of Laker Win Over 76ers to be Used as Dental Anaesthetic

Share All sharing options for: In Future, Video of Laker Win Over 76ers to be Used as Dental Anaesthetic

My friends, I'm feeling a bit conflicted right now. On the one hand, it's never in my self-interest to discourage people from watching the Lakers. Blogging about the team has made me one of the world's richest men, and if I want to continue buying endangered sturgeon caviar on the black market to feed my cat and lavish yachts for my mistresses, I need you all to keep watching and reading about the purple and gold. My Bond Villain island fortress doesn't pay for itself! It's paid for by Shannon Brown dunk videos and making fun of Derek Fisher.

On the other hand, nothing is more important to me than the trust of my readers. And I'd be violating that trust if I didn't advise you to find something else to do the next time the Lakers play the Philadelphia 76ers on a Friday night. Because let's face it. Watching tonight's game, a numbingly dull 99 to 90 Laker victory, was the worst way you could possibly have ushered in your weekend. Literally working as an usher somewhere would've been more fun, unless you were working at Staples Center and thus witness to this game.

What's that? You want actual "analysis" of the "basketball" that was "played"? You sicken me, sirs and mesdames! Your depravity knows no bounds! But whatever, I'm hear to please.

The 76ers are basically a terrible team. Their roster has been haphazardly constructed and what talent they have is ill suited for the system they're trying to run. They don't really have any business being on the floor with the Lakers. Unfortunately, the Lakers themselves understand this and tonight decided to play with the bare minimum of effort. We know this happens from time to time, but that doesn't make it any more enjoyable to watch.

Philly led by a point after the first and second quarters thanks to extreme defensive laziness on the Lakers' part. Penetration by Lou Williams and Andre Inguodala led to easy looks at the rim for Samuel Dalembert, who had 14 points at halftime and finished with a career-high 24. For a while the Sixers punished the Lakers by running whenever they could. The Lake Show's transition D has been really strong in recent games, but the effort to get back after misses wasn't there tonight until deep into the third period.

After halftime, the Lakers gradually emerged from their stupor and shut down what passes for the Philly offense. The 76ers scored 1.13 points per possession in the first half but only 0.89 in the second. Meanwhile, Pau Gasol and Andrew Bynum hurt them repeatedly on the offensive glass. The Laker offense wasn't a thing of beauty, but there enough volleyball-style tips and long-distance shooting from the bench to bring it home. Lamar Odom, Jordan Farmar and Shannon Brown hit 4 of 9 threes; Kobe Bryant and Derek Fisher had another bad shooting night, connecting on only 1 of 5 from range.

This was a dreary game against a dreary opponent, pretty much devoid of all entertainment value. That happens when you have to play 82 of these games in the regular season, but hey. It's a win and it lasted only two hours. Just imagine how suicidal we'd have been if we'd had to watch overtime.

The Lakers are now 44-15 and remain 1½ games (plus a tiebreaker) behind Cleveland and 4½ ahead of Denver. The Nuggs are in town on Sunday, of course. And because tonight's game was so boring, here's a picture of a bunny wearing sunglasses. 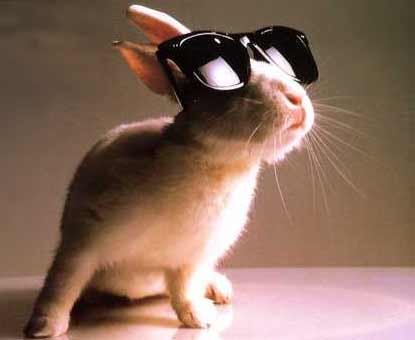