The NBA regular season is a long and winding road.  It goes uphill and downhill; it has straightaways and hairpin turns.  You would think that the end of such a journey would bring some great accomplishment, that there would be some wonderful reward or tremendous honor at the end.  Sadly, the exact opposite is true.  For the lottery teams, the road ends with a sudden cliff, and no choice but to barrel off into oblivion.  For those 16 teams lucky enough to make the playoffs, the road ends right back where it started, with all teams back at square one, and another long journey ahead of them.

In case you didn't want to come with me on that lengthy metaphor, let me spell it out for you: The NBA regular season isn't pointless, but it's not super important either.

Sure, home-court advantage in any of 1-4 playoff series is a nice little prize, but the cold hard truth is that 82 games worth of effort in winning that edge can be undone by one bad game.  Having the best record in the NBA is no guarantee of winning the championship (Cleveland can tell you about that).  Hell, it doesn't even guarantee a team making it out of the first round (Dallas knows all about that one).  The best coaches in the league know all of this, which explains why the best coaches don't take the regular season all that seriously.  Of course, in saying "the best coaches", I am referring to Phil Jackson and Gregg Popovich.  My justification is simple.  Phil Jackson has led teams to 10 championships.  Pop has led teams to 4.  And all the 28 other head coaches in the league have led their teams to 2 championships ... combined (and one of those two isn't even coaching the same team). 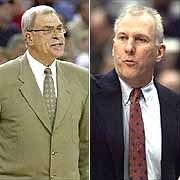 PJ and Popovich each have their own style of treating the regular season like the burdensome task that it is.  Popovich prefers to simply ignore its importance altogether, resting his players whenever he feels like it.  The Spurs' two best players, Tim Duncan and Tony Parker, average only 32 minutes a night.  Nobody else on the team plays more than those two either, which means San Antonio has the most equal distribution of "starter minutes" to "bench minutes" in the league.  Sure, Pop is forced to limit minutes in part due to his team's age, but even in the championship years, the Spurs were always at or near the top in terms of bench minutes played.

PJ's style is completely different.  To Jackson, the regular season is just one big lab experiment.  You can almost see him sitting there in a white lab coat, thinking "If I put Luke Walton and Jordan Farmar together and leave them there for 5 minutes, what reaction will occur?" or "Let's see what happens if I put the 5 worst players we've got on the court at the same time in the 2nd quarter."  He lets his teams dig themselves big holes just to see how they respond.  He sacrifices entire games to try and find a lineup for which Sasha Vujacic is the missing ingredient, or to attempt to keep Derek Fisher from forgetting how to shoot in his old age.  To the untrained eye, half the time it looks like PJ isn't doing anything, and the other half, he seems like he's actively trying to make the Lakers lose.

All that said, both coaches know that the regular season has some importance.  Teams do have to actually win enough games to be invited to the after-party, though it's pretty much a given if a team has ideas about winning a championship.  The Lakers, for example, could probably sleep-walk their way to a 3 seed this season.  Hell, one could make the case that they've done just that in leading the West by 5 games.  Besides, there is something of far greater importance about the regular season: how a team finishes it.  A strong finish to the regular season is a trademark for both of these coaches.

Well, the time is now.  It remains to be seen whether the Spurs have one last run in them.  It certainly seems as if they've hitched a bum horse to their wagon, and that horse is slowing them down too much, but would it really surprise you if "Timmy D and company" put it all together for one last late season push?  However, whether they do or not is irrelevant, as we care only what the Lakers do.

For the Lakers, the time for experimentation is over.  The lab coat needs to be put back in the closet, hung up right next to the chemistry set.  It's that time of the season where Phil Jackson stops focusing on what doesn't work, and starts focusing on what does.  The Lakers have 26 games left, roughly two months to go.  With Kobe Bryant (likely) returning to the lineup tonight, they will have all the pieces which are likely to contribute heavily towards the playoff run and they should have only one goal to accomplish for the rest of the season.  All the Lakers should care about for the next two months is fine tuning everything they do so that they are operating at maximum efficiency for the 2nd season.  The best record in the NBA is within reach, but if the Lakers were to achieve it, you can bet it will be as a by-product, not a direct intention.

No more force feeding Andrew Bynum regardless of whether he's having a bad night.  No more relying on Kobe to bail out the offense with tough shot after tough shot.  And certainly no more needless minutes going to anybody outside the core 8,  unless foul trouble demands it (Luke, and maybe Sasha, would be OK if they weren't hurt).  Play time is over, it's time for the Lakers to go to work.