With Warriors in Town, Kobe to Come Out to Play-yay

Share All sharing options for: With Warriors in Town, Kobe to Come Out to Play-yay

After time off, the first day back at the office is never easy. Your mind is still in vacation mode. You got used to sleeping in and watching General Hospital every day. It's usually not until midweek that your mental engines get warmed up again and you start functioning at peak output.

Luckily for the Lakers, who resume play tonight after a week's break, they get to ease back into the grind. They get to face the Golden State Warriors, one of the sorriest teams around. The Warriors average a road win about once a month and have been in disarray since... I don't know, July 2008? At Staples they're as close to an automatic Laker W as we could ask for.

Which is nice, since the Lakers have some things to work through, such as: what's it going to be like with Kobe Bryant back in action? After 11 days off to rehabilitate his injured ankle and sundry other maladies, he'll return tonight, and as strange as it sounds in regard to the face of the franchise, it's not clear how he'll fit in. He missed only three games, but my, what games those were. With him and Andrew Bynum on the shelf, Pau Gasol and Lamar Odom performed beautifully in leading the team to blowout wins in Portland, at home against San Antonio and in Utah. It's incumbent on both Kobe and his teammates to put his extraordinary talents to use while preserving the sweet groove established in his absence.

People will have their eyes on the Laker offense tonight, attuned to Kobe's shot attempts (or lack of same). The first time he unspools a corkscrew 20-footer with 17 seconds left on the clock, expect an even greater-than-usual outpouring of angst. I recommend, however, that you look just as closely to how the Lakers perform on D. That's where we saw the huge improvement after Kobe went down. It's not that Kobe was himself defending poorly; far from it. But there's no question those three games brought out a snarling defensive effort from everyone else that we can only hope is sustainable.

It sounds as if Drew's going to give it a shot tonight as well. His bruised hip is still giving him problems, but he and Phil Jackson seem to view it as something that will improve with conditioning. Golden State's a great opponent for this purpose. They run, so Drew's guaranteed to get some game-speed cardio, but they're pretty soft inside, so he's not likely to get banged on much. When the Celtics visit on Thursday it'll be a more rigorous test. 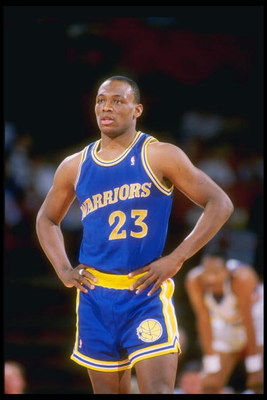 This will be the third contest of the season between the Lakers and Warriors. In the first, on November 28, the Lakers rolled into Oakland and won by 33. In the second, on December 29 at Stapes, Kobe scored 44 in a six-point victory. Since that last meeting the Warriors are 5-15 and 1-7 on the road. The only road win in that stretch was in Minnesota, more than a month ago.

Monta Ellis, their ultra-ball-dominating guard, might not play tonight, as he's listed as questionable with a sprained right knee. Ellis's per-game numbers inflate his value (he's not an efficient scorer and is wildly turnover-prone), but the team isn't loaded with guys who can get their own shot, so if he's out that's yet another big advantage for LA.

Though not as much talked about as Ellis or rookie point guard Stephen Curry, Corey Maggette is Golden State's best player. He, unlike Monta, is terrifically efficient at putting points on the board and gets to the line like almost no one else. Watching him and Ron Artest do battle will be great fun. 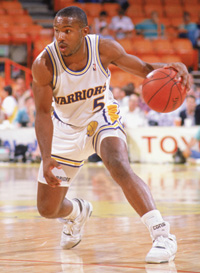 Beyond that, the Warriors' best threats are from outside, in the persons of Curry and Anthony Morrow. The Golden State front line is a farce. Anthony Randolph, their most talented big, is out with injury. Andris Biedrins, their next-most talented, is in Don Nelson's doghouse and splitting minutes with Ronny Turiaf. Nellie's also giving significant run to someone named Anthony Tolliver.

That's a whole lot of Anthonies for one team.

So tonight's mostly a warmup for the Boston fight on Thursday. On the to-do list are getting Kobe reintegrated, getting Bynum back up to speed and kicking off the All-Star weekend rust. Vegas foresees an easy Laker win, as the gold and purple are favored by 13½.