All-Star weekend is well under way, with the culminating event of the 2010 NBA All-Star Game fast approaching. We already know which Lakers were selected for the event, SG Kobe Bryant and PF/C Pau Gasol. We also know that Kobe is sitting out the game due to 'injury' (honestly, I highly doubt that word is even in his vocabulary). The question is, were those the only two Lakers deserving of playing in the All-Star game?

Now, if you can read the title to this post (and, if you can't, drop everything and get to an optometrist), you'll probably have guessed that I'm referring to Andrew Bynum. Now, do I honestly think that Bynum was 'snubbed' from the All-Star game this year? Short answer is no. In fact, the long answer is no, too. Amare Stoudemire has actually been having a quite good year, as have Chris Kaman, Marc Gasol and Zach Randolph- all better that Bynum's. Bynum has shown the short stretches of being a player with an indiscernible ceiling, but consistency is an issue, and his season numbers aren't too impressive.

Notice the use of the word indiscernible. One may think that's on odd choice of word, or simply that I'm a mediocre writer and I used a bad synonym for 'high'. One would be wrong, I chose that word carefully, as it is possibly the most accurate word in describing the young Bynum's potential.

Now, I make no claim to being a farseer (if I were, I'd certainly be off rolling in the piles of money brought in through successful lottery attempts in lieu of writing an article like this at 2AM), but here I shall, not as much predict, as discuss Bynum's possible potential. 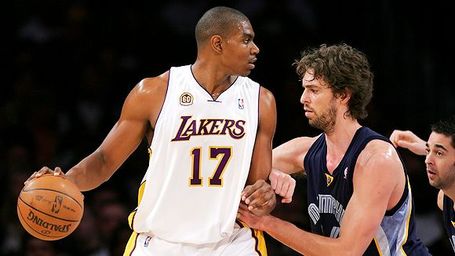 We fans are a fickle bunch. Right now, there's murmurs of benching him. A few years back, there was that infamous video in which Kobe demanded that Mitch 'ship [Bynum's] ass out', and back then most of us agreed with Kobe. We've gone from that, to many of us staunchly defending Bynum and refusing to even consider trading him for Chris Bosh, who is a top-10 player in the League today, possibly the best PF in the League this season (Timmy and Kev are past their prime, Pau's missed a lot of time); all based on Bynum's 'potential'.

That's a fickle concept, potential. How do we determine what his potential is? Do we point at instances of him having good games and say 'there it is'? Or do we believe it's somewhere further than that? Do we look at his 42/15 against the Los Angeles Clippers last year, and expect that from him on a nightly basis? Out of those options, the only certainty is that expecting 42/15 on a nightly basis is ridiculous; the kid's quite obviously no Wilt Chamberlain. It's reasonable to say his potential is to play at or somewhat above what he does now on a 'good' day, as he IS still young and not in his prime yet.

I do believe, however, that his youth is overstated. He is 22, true, but he has already been in this League 5 years, which is more than the 4 that an average first-rounder averages. He has put miles on his body, and has had plenty of experience manning the pivot. As such, him not having a better season than 15/8 is somewhat disconcerting, especially considering that Wilt by his fifth season was averaging 37/22, Shaq 26/12.5, Kareem 27/14.5, and Hakeem 25/13.5. That, however, should not be surpising. Those 4 were probably the 4 greatest Centers of all time, and even the biggest Bynum fan would have trouble arguing that Bynum can vie for a place at such a table. Perhaps a more accurate comparison would be current All-NBA First Team Center Dwight Howard... guess which one his fifth season was (hint: it was last season, where he won DPoY, averaged 20.5/14/3, and led his team to the Finals). Huh. 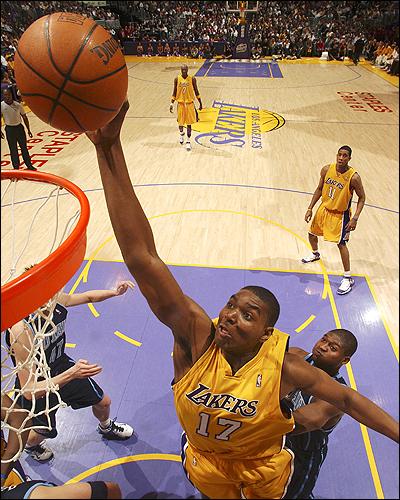 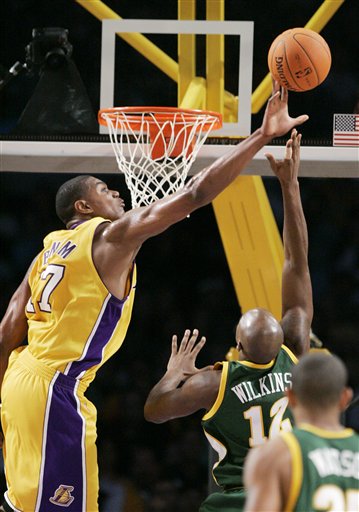 When I was young, I would never understand why my mother refused to allow me to constantly eat candy - I believed that as it tasted delicious, it should be a staple of my diet, whilst my mother was adamant it was a 'sometimes thing'. The questions that went through my head when she said this were 'Why?' and 'Is it always a 'sometimes thing'?'. The same questions apply looking at the Bynum of these images.

The numbers seem to say it's unlikely Drew will even be as good as Dwight. In this case, however, the numbers may be misleading. Even the most casual observer would notice that Drew is more skilled than Dwight offensively, but Dwight is so much more athletic. Athleticism is fickle, an injury or Father Time will take it away eventually. Skills, if kept honed, never fade. Drew has learnt his skillset from possibly the most skilled Center of all time, NBA All-Time leading scorer Kareem Abdul-Jabbar, which can only mean good things (unfortunately, Kareem was recently diagnosed with Leukemia, and Bynum thought it best to cease training with Kareem).

So, if Bynum is so much more skilled offensively than Dwight, what gives? One may try arguing the depth of his team leads to a lack of shots, but Dwight is averaging only 9 shots a game this season, and 12 last, so it's fair ground there. The most obvious argument is that Drew has not even played a full season since his 'breakout' in January of 08, due to knee injuries. While this may raise alarm bells in the heads of some, these injuries were both caused by teammates colliding into him (LO and Kobe, respectively), and were freak accidents - by no means do they mean he is injury-prone.

The most vague factor of all is athleticism. While Andrew Bynum cannot ever hope to match the athleticism of Dwight (only Wilt and maybe Bill Russel were more athletic Centers than Dwight), his athletic ceiling is highly relevant to this discussion. While the pre-injury Bynum showed a large athletic potential, being 7'1"/285 and still having a 36-38" vertical leap, the successive knee injuries have taken a highly visible toll on his athleticism. Alley-oops which he used to flush with authority, he often cannot get up high enough to catch, or simply lays in. The question is, how much will he recover? This hinges much on how much of the decreased athleticism is actually physical, and how much is mental, something only Andrew knows. Needless to say, if he wishes to overtake Dwight, some recovery is needed. 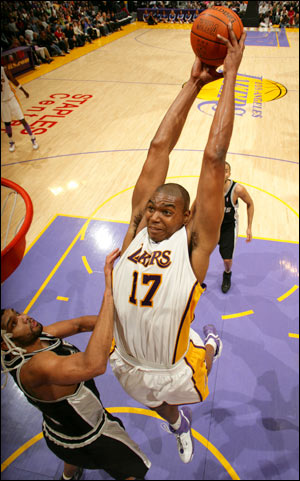 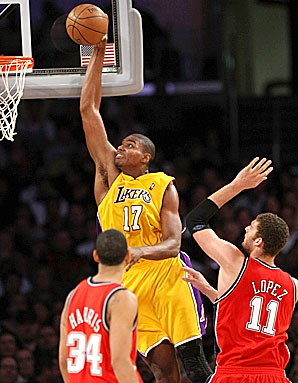 What brought this question of Bynum's potential to mind was those Chris Bosh trade rumours of a while back. It was a no-brainer to me, no matter Bynum's potential, Chris Bosh was a guaranteed top-10 player in the NBA, something which Bynum was far from accomplishing. There were many, however, who viciously defended Bynum, all based on his youth and potential. The youth factor was irrelevant in my eyes, as Bosh has only 4 years' of age on Bynum, and two years' of NBA experience. The potential factor is what intrigues me. Chris Bosh is currently averaging 24.4/11.4 for the season, is an Olympian and has multiple All-Star appearances under his belt. Bynum has nothing that can compete with this, other than his potential. Chris Bosh is close to 20/10 for his career, while Bynum is a comparatively paltry 10/6. Chris Bosh is still only 26 and has the potential to be even better, he only has two more years' experience than Bynum. The question begs asking that do we believe, in two years, our Drew shall be putting up 25/12 on a nightly basis? If we don't, how do we believe he's better than Bosh based on potential?

How do people see Bynum as better?

I shan't go into the question of whether Bynum can be the best Center in the NBA, I just don't see it happening. Even when Dwight's athleticism inevitably declines, there shall still be young beasts like Brook Lopez and Marc Gasol (both having comparable or better seasons than Bynum) to duke it out for the mantle of best big man in the game.

The relevant question is, what is his ceiling? Perennial All-Star? Franchise Player of a Championship Contender? Part of a One-Two punch (Chris Paul? xP)? Stuck in mediocrity? Or *shudders* injury-plagued 'could've-been'? Back to the All-Star Game, how many appearances will he deserve? Starting, off the bench?

I'll leave you guys to duke it out, with some videos for you to drool over. (-: