Did you hear? Matt Barnes had a perfect shooting game last night. And we're not talking about some measly two- foot put-backs here, we're talking 5-5 from the three point line, and 5-5 from the free throw line. On top of that add 7 rebounds, 6 assists, ZERO turnovers, and then two steals, and you are practically begging for some spotlight from Laker Nation.

Well here it is Matty Barnes, you crazy ball-fake-to-the-face-of-the-Mamba-man. That was some game, and we're sure many more great moments await you as a Laker. But lest any foolhardy newbie think that you are some overnight sensation, let's take a look back at your career, and how you got here.

This Q&A from July 31, 2009 in the Orlando Sentinel is a must-read for anyone who wants to know more about Matt Barnes.

He talks about how after 3 years of bouncing around the NBA (even the D-League) he almost gave up basketball to play in the NFL:

Q: Could you tell us about how you almost went to the NFL?

I gave myself one more year with the Golden State thing that happened my first year we went to the playoffs and beat Dallas. I had 7 NFL teams willing to give me a tryout, a walk on tryout. I was dead serious about making the jump but I’m glad golden state worked out.

He also talks about losing his mother:

Q: Your play dropped off a little bit that second season with Golden State. Was that because of personal issues?

Barnes: My mom died of cancer. My mom was diagnosed with cancer November 1st of 2007 and she died November 27th. She died 26 days, that was the hardest thing I’ve ever been through in my life. I’m not over it. I accept it now. For her to go in and go through what she went through and for her to die in 26 days it jus really, it ate me up. Very first game of the season I found out and she died within 26 days. That was a very tough time for me. Not to make any exuses. I tried to play through it, I just didn’t have it. and I realize that, I think Golden State for sticking behind me and you know, kinda being there for me. At the end of the day it is a business and if you don’t perform you’re out of somewhere.

This is a dude who has seen some rough days, major ups and downs in his career. But he's shown resilience and mental toughness. Guys like this who don't get all the attention, who have to work for everything,  you have to really hope they can just find some stability, a place where they are needed, and early signs look good that Matt Barnes may have found a long-term home with the Lakers.

So let's take a look back at his long journey to Lakerland, beginning with his draft day, which started out with him being drafted by the Grizz and immediately sent shipping to the Cavaliers:

To help illustrate what a long way Matt Barnes has come since 2002, I've created this map of all his stops: 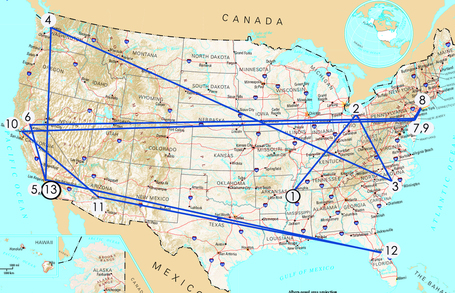 So yeah, go ahead and take a step back, Matty Barnes, and give yourself a pat on the back for sticking with it, not whining, and taking care of bizness. Now let's get you a cool nickname. Suggestions?